Fede Álvarez's remake of Evil Dead (1981) throws out the splat-stick humour of Sam Raimi’s original shocker and ups the ferocity to nearly unbearable levels to create a dark, surprisingly bleak and frequently horrifying film. The basic plot – a group of friends fall prey to demonic forces while staying at an isolated cabin the woods – remains largely the same, but Álvarez introduces a compelling element involving addiction and grief to really flesh things out.

The screenplay – co-written by Álvarez and Rodo Sayagues – is an exercise in stripped back storytelling with minimalist plot. There is a welcome emphasis on the use of practical effects instead of CGI, which results in some truly startling make-up and gore, further enhanced by a raw physicality from the actors who all throw themselves into proceedings with grim aplomb. While the violence is certainly outlandish, it is grounded in a gritty realism quite far removed from Raimi’s original, which makes it all the more unsettling.

Demonic possession has been used in horror cinema to explore ideas of mental illness, identity disorders and sexual awakening. In Evil Dead, Álvarez equates possession with drug addiction and dependency and uses it explore the character of Mia (Jane Levy) and her descent into the hell of addiction after her mother’s death. This element not only grounds the plot and provides a legitimate reason why she and her brother (Shiloh Fernandez) and their friends are at the cabin to begin with (to help Mia through her withdrawal, which makes for a refreshing change from the usual ‘we’re here to party’). Even with all the harbingers of doom (bodies of mutilated cats in the cellar, a nearby rising river, a creepy book of incantations bound in human skin), the gang decides to stay because it’s best for Mia. They refuse to give up on her, and they eventually pay with (all) their blood. 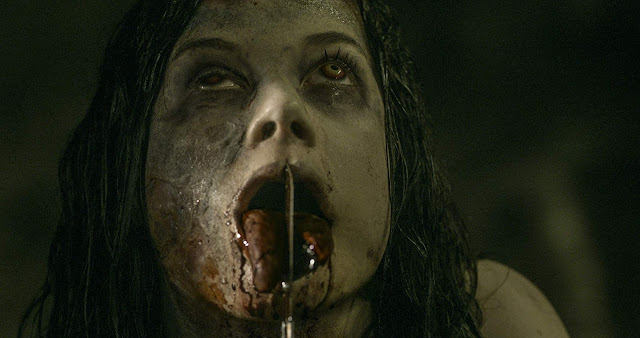 Addiction and demonic possession are further connoted when Mia preys on the devotion of her brother and friends, issues threats and empty promises, and becomes increasingly devious and aggressive. This is powerfully foreshadowed in the opening scene in which a young woman possessed by demonic forces stealthily fills her father’s ears with honeyed words to trick him into freeing her. Later, Mia’s actions and physical appearance also become unrecognisable, as she self-harms resulting in horrific injuries that visually echo deteriorations of physical appearance associated with drug addiction. In the end (and amidst some stunning, apocalyptic imagery), Mia literally goes through hell, dies, is resurrected, undergoes a baptism of blood and fire, and faces off against ‘herself’ (the demon has emerged from the ground in her form, a doppelganger) to finally emerge on the other side of possession and addiction, reborn, but not unscathed. As viewers may also find themselves after experiencing Álvarez’s bloody, intensely cathartic film.
Addiction Demon Demonic Possession Evil Dead HP Lovecraft Remake

James Gracey said…
Thanks Richard. I revisited it recently, without any expectation, and enjoyed it much more than the first time I saw it. Very well made, decent cast, buckets of atmosphere (and blood) and the subtext regarding addiction/withdrawal (which I hadn't really picked up on first time around) all added up to a pretty powerful experience. It's a great film, and a really great remake.
13 March 2020 at 22:09