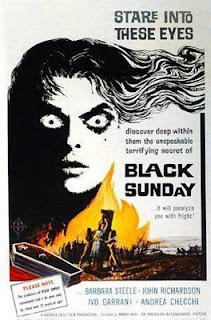 Aka The Mask of Satan

With Black Sunday, Mario Bava not only directed his first film (if you don’t count Riccardo Freda’s The Vampires, which Bava photographed and finished directing when Freda left the production), he also made what many consider to be the definitive Euro-Gothic horror film. Adapted from a short story by Nicolaj Gogal, Black Sunday was banned in Britain for eight years, due in large to the brutal opening sequence where Barbara Steele has a mask with spikes inside it forcably fixed to her face.

The diabolical Princess Asa (Steele) and her fiendish servant, are put to death as punishment for witchcraft and vampirism, and interned in the crypt of her ancestors; but not before she vows to inflict vengeance on the future generations of her family.
Two centuries later, the wheel of the coach carrying the doctors Andre Gorobec and Thomas Kruvajan to a convention buckles, and they are temporarily stranded outside an ancient crypt. Which of course they decide to explore. Kruvajan cuts himself while fending off a giant bat, and his blood trickles into the coffin of Princess Asa, and unbeknownst to the intrepid physicians, begins to revive her putrid corpse.
Leaving the gloomy vault, Kruvajan and Andre met Princess Katia (Steele again) outside. Steele looks resplendent against the backdrop of the ruins and the unsettled matte skies beyond as she wields two Dobermans on leashes, and demands to know what the inquisitive doctors think they are doing. As soon as he sees her, Andre falls in love.
Meanwhile, back inside the crypt, Asa is almost completely rejuvenated and using her dark powers, resurrects the decomposing body of her servant so he can aid her in carrying out her dark desires once again. 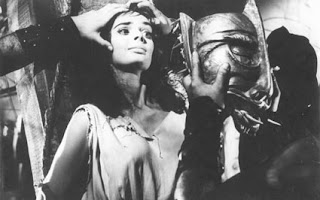 Black Sunday is a film of immense visual finesse and poetry. The cobwebbed and mist shrouded ruins in which Asa dwells, are a particularly astounding set piece. When Kruvajan and Andre enter the vault, Bava’s camera glides wraith-like through it, making an impressive 360 degree spin and taking in every inch of the ominous set.

The special effects utilised are subtle and created in camera, using make-up, lighting and editing trickery. A few memorable images occur when the devil mask fastened to the faces of Asa and her servant is reflected in a glass of wine, and when two eyes appear in the dark and empty sockets of Asa’s corpse. When Kruvajan ventures out into the night to smoke a cigarette, he stands by a little pool and throws a stone into it. As the water ripples the face of Asa slowly appears in the darkness, beautiful and dreamlike and more than a little unnerving. 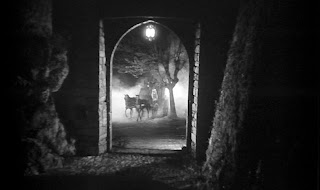 When the spectral horse and carriage gallop in slow motion through the forest to abduct Kruvajan, it is reminiscent of Harker’s journey to Castle Dracula and just as creepy. Amando De Ossorio would appear to have been rather touched by this imagery as he would famously, and just as breathtakingly, recreate it in his Blind Dead films.

One of the most memorable scenes unfolds when Asa’s servant is resurrected and begins to claw his way out of his burial place. The camera floats to a window in the barn where a young girl is hiding and looks out at a creepy cemetery. We suddenly jump cut to the heaving earth under a tombstone as the corpse rises, still wearing the hideous and startlingly sinister mask. The stillness of this scene is also disconcerting; no music accompanies the chilling imagery. Bava makes impressive use of creepy sound effects such as the eerie winds that seem to constantly howl and the guttural wailing that emanates from the family vault. 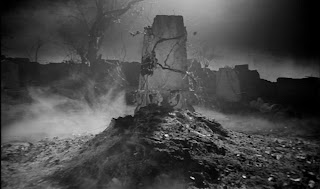 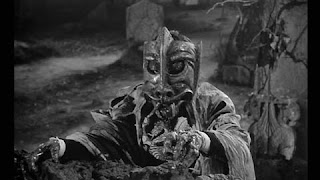 A sort of dream logic comes into play as the film nears its climax, particularly in the scene in which Constantine becomes trapped in the secret passageway behind the fireplace and is menaced by Asa’s servant who appears from nowhere and forces Constantine into a hole that just as suddenly appears in the floor.
Tim Burton would pay homage to this film in Sleepy Hollow – as much of a love-letter to old Hammer Horror films as it is to Black Sunday. The scenes in which Depp’s Ichabod Crane has flashbacks of his mother’s demise inside an iron maiden echo Steele’s ghastly fate in this film, and her later emergence with a multi-punctured face. 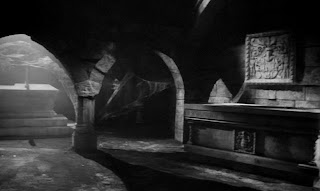 Of course, we realise long before any of the characters, that Katia is the unfortunate descendant of Asa and that the evil princess plans to vampirically drain the life out of her and carry on living in her place. The twin roles that Barbara Steele portrays have cemented her reputation as one of horror’s most commanding presences. No one can play equal parts vulnerable and menacing like her. Apart from Vincent Price of course. But that’s a whole other blog.
While it does contain many clichés associated with the gothic tradition, such as the secret-passage riddled castle, the superstitious locals, the helpless and swooning heroine, the stiff upper-lipped hero and rather quite baffling dialogue such as ‘The river! Can’t you see he’s dead’ or ‘He seems to be a lot calmer now’ – well, he IS sleeping!), Bava conducts this symphony of moodiness with such aplomb; it is never anything short of captivating.

A dark and gloomy fairy tale that crawls under the skin to seductively nuzzle from within.

Terence said…
I feel bad having not seen this! :S I HAVE however, seen Lamberto Bava's semi-remake/tribute to this which has the same title "La maschera del demonio" (aka Demons 5:The Devil's Veil)!

It gets a bit repetitive around the middle (and the protagonist is an idiot) but the climax is pretty awesome and even uses some Bava-esque lighting! Overall, I was actually pleasantly surprised with Lamberto's film.
17 September 2012 at 12:05

James Gracey said…
Thanks for the link Terence, I shall have to check this one out - I haven't seen too many of Bava Jnr's films, but I love the work of his father. And I do love me some Bava-esque lighting! ;)
24 September 2012 at 18:05

James Gracey said…
PS I hope you get a chance to check out Black Sunday. It really is a gothic masterpiece of moodiness.
24 September 2012 at 18:06