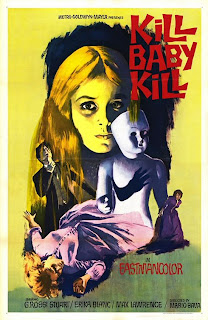 Slightly absurd title aside, Kill Baby Kill is without a doubt one of Mario Bava’s most underrated films and an undeniable slice of sublime high-Gothic hokum.
Arriving in an isolated Transylvanian village to investigate the death of a local woman, Dr Paul Eswai (the rather stiff and gauffered Giacomo Rossi-Stuart) is met with suspicion and wariness by the various local types he encounters.
With the help of his assistant Monica (Erika Blank), Paul begins to suspect that something supernatural is occurring in the village. Something that is driving the locals to suicide. Something that appears to have a connection with the crumbling Villa Graps and its sinister inhabitant, Baroness Graps. But what?

Kill Baby Kill is, like quite a few Italian horror films, an exercise in style over substance. But when the style is created by Mario Bava, it is somehow easier to overlook the convoluted and threadbare plot and slight overuse of the 'shock zoom', and just allow one’s self to become utterly emerged in ethereal visuals and overwhelmingly creepy atmosphere. Bava is a true visual artist and treats his films like canvases, drenching everything in moodiness and saturated colour. His masterful direction renders the mundane and the everyday with a sense of otherworldliness and mystery: a slowly opening door, a child on a swing or a bouncing ball have rarely seemed so threatening or sinister. In lesser films, characters endlessly wandering through darkened streets and eerily lit hallways in crumbling gothic mansions might become tedious, but in a Mario Bava film, these moments are indelibly etched on the consciousness and are hypnotic in their style and mood.

The village in which the sinister events uncoil is essentially another character in the film, especially during the scenes that occur at night, when it takes on a completely different appearance once darkness falls. The Escheresque lanes and archways are ominous and yet retain a strange beauty due to the way in which Bava bathes them in moody lighting and meticulously considered composition. 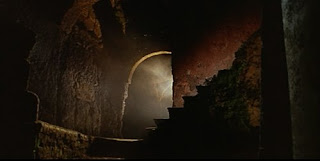 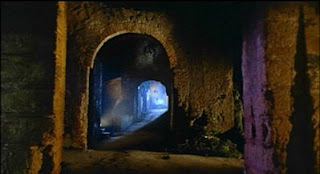 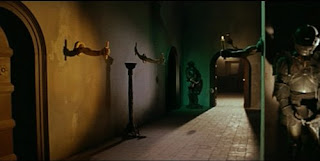 The stifling atmosphere of impenetrable doom is further heightened by the locals’ saturation in superstition and anxiety. Paul represents the forward-thinking outsider; he comes from a world of reason and logic and is completely at odds with their way of thinking. It soon becomes apparent though that the supernatural does indeed have the village in its grip. Various appearances of a creepy ghost child are scattered throughout the film and create moments of genuine uneasiness. The ghost is that of a small girl who died under mysterious circumstances while the villagers were indulging in a festival many years ago. The fact that the ghost-girl is actually portrayed by a young boy in a vast blonde wig only adds to the uncanniness of her various appearances at windows, peering in ominously. These images seem to have had a big influence on Guillermo Del Toro, particularly in his film The Devil’s Backbone.


The oppressive atmosphere and airlessness of the film seems to affect the very characters themselves. The use of restrictive costumes adds to the stifling claustrophobia evoked by Bava. The female characters are bound up in corseted dresses, and throughout the film various male characters tug at their stiff collars as if gasping for air. Everything hangs together under a suffocating, unearthly ambience. 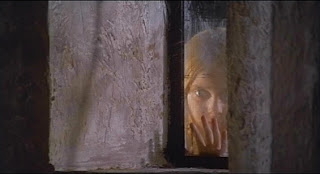 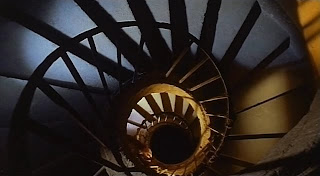 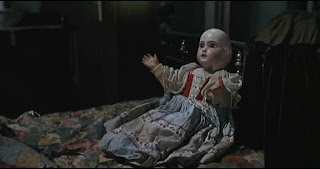 Events descend into further delirium and surrealism when Paul and Monica enter the dilapidated Villa Graps, resplendent in its faded grandeur. When Monica disappears, Paul follows her calls and enters a room with a huge cobwebbed painting of the house in the background. Following Monica’s voice through a door at the far end of the room, he ends up in the same room again. He continues to run through the same door and end up in the same room, over and over again. He speeds up, until he eventually begins to enter the room before he has left it and starts chasing himself through the same room over and over again, finally catching up with himself and providing the film with one of its most unsettling moments: his doppelganger staring back at him and laughing maniacally before disappearing. Paul at this stage is in as confused a state as we are. Stumbling back towards the picture of the house, Paul then becomes tangled up in cobwebs and falls back into the painting, emerging outside the house in a huge web, struggling to break out of it.

Meanwhile Monica has also become trapped in her own Moebius inspired nightmare: descending a flight of spiral steps, she begins to panic as she realises that they never end. Bava begins to move the camera to counter her movements and the effect is dizzying and utterly disorientating.

Unfolding as a series of provocative images and intriguing exposition, Kill Baby Kill is a visual feast that ambles along at a cadaver’s pace, but becomes increasingly involving as the protagonists become more immersed in the mystery. Logic is dispelled and in its place remains only the possibility that anything can happen. A masterpiece of mood and style.