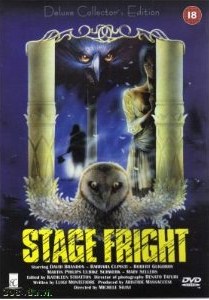 Argento protégé Michele Soavi directed this, his debut film, as something of a homage to Dario Argento. The film is laced with outlandish implausibility and forehead-smacking irrationality, but it is shot through with such unflinching intensity and flair, it manages to retain one’s attention and perhaps even immerse the viewer in a dark and claustrophobic world in which a violent psychopath lurks behind every corner…

Argento’s influence on Soavi is apparent in the film’s visual department: creepy sets and lurid lighting abound in Stage Fright, and while it might be all style over substance – what style it is!

The film begins with what appears to be an attack on a prostitute in a dark and eerily lit alley. Suddenly the camera pulls back to reveal what we are actually witnessing is a dress rehearsal by a theatre troupe producing a play entitled The Night Owl. It is with this scene, and a few others like it that pepper the film, that Soavi sets the tone for Stage Fright. We are constantly reminded that what we are watching simply isn’t real. This isn’t done in a jokey ‘we’re so postmodern’ way; rather a more subtle and, dare I say it, sophisticated approach is utilised. This playful approach to the artifice of the horror genre is also deployed in a canny scene where, just before a character is killed, a bottle of fake blood falls to the floor, its contents spilling everywhere. Moments later when said character is killed by the owl-head wearing killer, his own blood mixes with that of the fake blood already on the floor. The reflexivity! 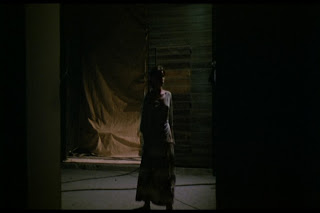 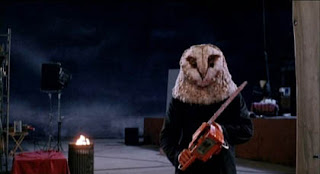 While the scenes depicting violence and stalking are carried off with aplomb, the same cannot be said of the rudimentary scenes and characterisation. Vague attempts are made to flesh out essentially 2D cardboard characters who are of course, only here to be bloodily murderlised. And Soavi knows this as well as we do. There is absolutely no mystery surrounding the killer’s identity or his motives – with this sort of information cast aside, Soavi quickly gets to work to do pretty much what any slasher movie fan expects the director to do. So what we get is a director who craftily toys with our expectations and every now and again actually provides something that is pleasantly refreshing in an otherwise by-the-numbers slasher film while also providing a high body count, gallons of blood and tension. 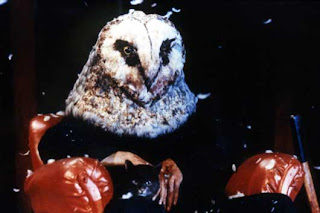 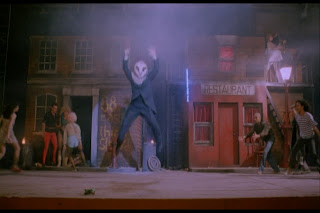 This is carefully exemplified in a rather tense scene in which we are led to believe (or simply assume, because it usually happens this way) that the killer is hiding in the back seat of a woman’s parked car. She sits futilely waiting for the intense rain to subside. And she continues to wait. And wait. All the while the tension mounts, and continues to mount when the payoff we are so diligently waiting for doesn’t happen. Soavi manages to muster a dark and unnerving foreboding throughout, relaying heavily on atmospheric lighting and effective editing.

One of the most memorable moments occurs towards the climax, when our resourceful heroine Alicia (Barbara Cupisti) discovers she is the only one still left alive. She hides under the stage as the killer, complete with large owl head, grandly emerges onto the stage accompanied by the strains of operatic music and begins to adjust the exquisitely strewn corpses of his victims. Feathers billow ethereally around and the scene possesses a strange beauty. Some frantic tension involving a misplaced key ensues.
Soavi also has a little fun with the film’s mise en scene and there is usually something strange such as a mask or a mannequin in the forefront of various shots that proves quite striking and startling. 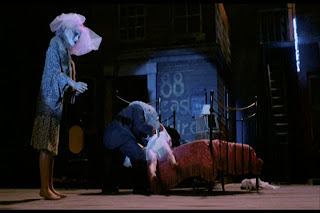 Despite these neat little touches, Soavi is still too quick to employ conventional shock tactics – the obligatory cat jumping out of a cupboard raises more of a chuckle than a jolt. Interestingly though, the group of characters attempt to stick together and don’t wander off alone to investigate strange noises. They still end up dead though – which they are supposed to do, what with this being a slasher film and everything.

With this film Soavi is evidently emerging from Dario Argento's shadow to find his own voice and vision, however with his subsequent films such as The Sect, The Church and Dellamorte, Dellamore, Soavi would really prove himself as a director of unique talent and vision, and come into his own as a purveyor of stylish, atmospheric and edgy horror.
An unpretentious slasher film that possesses artistic flair, a striking visual style and more than a few moments of genuine tension.
Dario Argento Eighties Horror Elaborate Deaths Exquisite Corpse Horror Film Italian Horror Killer Dressed As Owl Michele Soavi Slasher Stalk'n'Slash