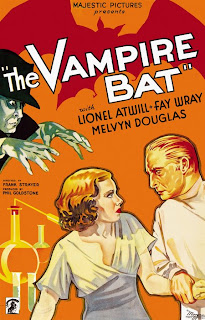 A small German village is plagued by a number of mysterious deaths, all of which leave the victims drained of blood. The town elders suspect the work of vampires and a number of large vampire bats are spotted in the area. Sceptical Police Inspector Karl Brettschneider (Melvyn Douglas) suspects the work of a psychotic serial killer who needs the blood drained from his victims for some sort of bizarre experiment… Is he right? Well, he’s not wrong.

The Vampire Bat is a surprisingly entertaining piece of schlock that also stars Lionel Atwill and Fay Wray. Aside from the big names attached to it, the film’s only other notable trait is that is was one of the first films to attempt to capitalise on the success of Universal’s horror epics Dracula (1931) and Frankenstein (1931). It mixes elements from both these films (and a slew of others) to intriguing, but arguably unmemorable effect. The somewhat loose story ambles along briskly enough and there are a couple of interestingly shot scenes amongst the seemingly endless exposition.

At times the conversations between various characters throw up some interesting connotations. Strayer attempts to conjure atmosphere through lengthy descriptions of half glimpsed terrors and the horrors that have befallen the town. This works to an extent, but the delivery is so wooden, the viewer couldn’t be blamed for allowing their minds to wander a little. Lengthy discussions of vampires, bats and plagues at times build up a nicely gothic atmosphere of dread and suspicion, while peasant superstitions are also pondered at length. The film does appear to have an underlying snobbishness as far as its depiction and treatment of the local townsfolk/underclass is concerned. They are portrayed as idiotic, paranoid, superstitious types with no concept of rationality whatsoever. The more affluent figures such as the detective, the doctor (Lionel Atwill), and the doctor’s assistant (Fay Wray) are drawn with slightly less broad strokes. Holding the more middleclass positions they do in the village, they treat those beneath them with impatience and maybe even a little contempt.

The backbone of the story is the idea that someone is preying on the fears and suspicions of local lore and fooling people for their own gain. Lots of ‘concerned’ locals gather outside the town’s autopsy theatre (!) and much ‘rhubarbing’ ensues.
The film’s depiction of a small town under siege – locals locked behind doors, frozen with paranoia and fear – builds up a stifling sense of claustrophobia quite successfully.

The rather moody opening sequence with a lamplighter making his way down a street and seeing something ‘bat-like’ move across the rooftops, is subtly chilling.
There is some surprisingly effective camera work courtesy of cinematographer Ira Morgan. At various stages throughout the film the camera adopts the viewpoint of an unseen stalker as it slinks into the bedrooms of various women in the village (doesn’t anyone close their windows when they believe vampires are around?). Looking as though it were almost handheld, the camera creeps through the darkness and right up into the faces of its victims as they waken just in time to see their attacker, their faces frozen in morbid terror.

A particularly startling shot (and bear in mind, this is a B budgeted film) takes place when sceptical Inspector Karl climbs into bed after a particularly hard day of furrowing his brow, being sceptical and smoking like a train. He is situated in the forefront of the shot and is backlit by the moonlight swimming moodily through the window. Suddenly a dark figure looms into frame and climbs stealthily through the window, advancing towards the bed before we fade ominously to black. No music accompanies this scene and events are allowed to unfold in their own time and in their own eerie silence. The absence of music is often quite an effective facet of the film.

The Vampire Bat is not without cliché though. Every now and again a wolf howls somewhere off screen and various characters look slowly and knowingly at each other as they stop what they are doing to look pensive.

We get our first glimpse of the typical ‘Mad Doctor’ laboratory when Karl goes to visit his girlfriend Ruth who is Doctor von Niemann's assistant. It’s all bubbling potions and test tubes. A vague attempt at humour occurs when a cork pops from a vat as Karl and Ruth kiss tepidly. And that’s as steamy as it gets. Hey, this is 1933, after all.

The Vampire Bat also boasts its own creepy 'village idiot' in the shape of Herman (Dwight Frye – no stranger to playing creepy 'village idiot' types, Frye also portrayed Renfield in Tod Browning’s version of Dracula). He wanders around as wide-eyed here as he does in that film too. Everything seems to perplex him and he jibbers on about how the bats are his friends, speaking about himself in third person. That said, Frye evokes some sympathy for his character, in the way that only Frye can. Before you can say ‘red herring’, Herman is accused of being the town’s resident blood-sucker – the seed germinating from the conversation the lamplighter and the Doctor have about Herman’s strange affinity with the bats in the area.

‘I don’t mind admitting that I’m up a tree. Stumped.’

The film utilises the sets from James Whale’s Frankenstein. One scene actually echoes Frankenstein, as Herman is pursued by an angry mob, with pitch forks and flaming torches into the evocatively titled Devil’s Well.

When the Doc seems to be communicating through means of Bela Lugosi-like telepathy, we know that something sinister is afoot – if we didn’t already know it. Cue lots of furrowed brows, emoting and one sided arguments – ‘It must be! It must be! She’s no better than the rest.’ It transpires that the Doctor has hypnotised his butler Emil (Robert Frazer) and has him flit about town abducting the locals and bringing them back to a secret lab behind a door in the Doc’s regular lab. Emil’s night wanderings are reminiscent of the somnambulistic perambulations of Conrad Veidt as Cesare in The Cabinet of Dr Caligari (1920). Wray walks in on Atwill ‘communicating’ with Emil and hears him order the butler to bring Karl to his secret lab. It transpires, as it usually does, that the Doc has discovered the secret of life and needs to use the blood of the living to further his research. He commits heinous acts in the name of science – Frankenstein-much. An interesting shot in the lab reveals something that resembles a beating heart in a tank of water. Through the water in the tank, we can see a woman stretched out on a table and the doctor attaching various bits of apparatus to her neck. A close up of a jar filling with liquid tells us all we need to know about the doc and his ghastly experiments.

Lionel Atwill usually plays slightly wide-eyed crazed types and he does an admirable job. The various shots of Atwill’s twitching face as Douglas throws around various theories about the killer’s identity are well enough handled. The three main players do what they do best and nothing more. What kind of cop is Douglas, anyway? By the film’s denouement, he seems perfectly happy for Emil to dish out a dose of vigilantism on the mortally wounded doctor and once he has secured Wray’s safety, he leaves the two men to murder each other in the lab. Whatever happened to the criminal justice system and the right to trail?

As mentioned, the film plays out like a compilation of Twenties/Thirties horror: The Cabinet of Dr Caligari, Dracula, Frankenstein and various other Mad Doctor/Vampire films are all referenced or pilfered from. It doesn’t really have any original ideas, but it does muster a certain energetic enthusiasm that renders it quite entertaining. Even at 60 minutes, it still seems quite long. It is but a slip of a story, but one that fans of old and creaky horror may find to be acceptable.

As The Vampire Bat exists within the public domain - you can watch it here for free. Pour yourself a nice glass of something red, kick back, relax and enjoy.