Whilst drawing water from the well on their farm one day, Pietro (Michael Segal) and his mute sister-in-law Alice (Marysia Kay) unearth something strange: an eerie, putrid glow that seems to infect the surrounding landscape, draining it of life. The family eventually succumb to the sinister effects of the strange colour and are driven out of their minds with dark dreams, vivid hallucinations and violent, blood-drenched deaths…

Italian director Ivan Zuccon is no stranger to the cosmic terrors of H.P. Lovecraft, having already adapted various narratives for the screen in his anthology The Shunned House (2003). Indeed some of the director’s other work such as The Darkness Beyond and Nympha are indelibly imbued with a distinct Lovecraftian influence.
Whilst The Colour From Space was adapted before (as Die Monster, Die!), Zuccon’s take on the short story really hits the mark and effortlessly transfers Lovecraft’s tale of insanity and other-worldly intrusion upon humanity from page to screen.

The screenplay by Ivo Gazzarrini sticks quite closely to the source material and although at times it seems the film may have been more effective as a short film, Zuccon’s stylish and restrained direction manages to maintain interest throughout.
Almost from the outset, Zuccon ensures we get an overwhelming sense of the isolation of the family: striking shots of the farmhouse situated in the middle of nowhere and the various scenes where the camera slowly drifts through the empty house create and sustain an atmosphere that hangs heavy with morbidity and a palpable sense of dread practically seeps out of every scene. The film simply abounds with creepy images, particularly the rather striking ones of the button-eyed red doll and Alice’s blood-drenched bed. 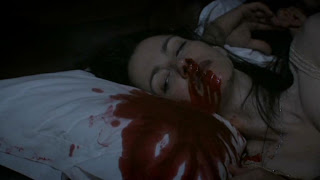 Zuccon easily sets his viewers on edge and creates an uneasy malaise that practically wafts from the screen. The distorted and warped atmosphere established at the beginning of the film in the haunting dream sequence, doesn’t let up throughout the increasingly grisly events. Impressive too is that the tone and look of the film were established so well with such a low budget. Zuccon wisely keeps the moments of CGI to a minimum and when utilising them, attempts to do so subtly. As it is, Colour From the Dark unravels at a fairly languid pace, taking its time to construct a mood of hopelessness and doom. Zuccon also photographed and edited the film and his cinematography is often strikingly beautiful. The fluid camera work exhibited throughout adds to the dreamy, unearthly tone of the story. A number of dream sequences also pepper the film, including a particularly unnerving moment featuring a couple of characters running frantically through a moonlit cornfield, culminating in the burial of a crucifix and a nasty death.

Before the effects of the alien colour turn malevolent, the farmer’s crops are bountiful and ripe and his injured knee heals itself. More startling still, is that Alice, Lucia’s mute sister, begins to speak. This ‘good fortune’ does not last long and eventually the family are plunged into increasingly dark events that will consume them: but not before robbing them of their sanity.
The characters look drawn and tired, and that’s even before the Colour begins to unhinge and possess them. The performances are strong throughout, particularly those of Michael Segal as the famer and Debbie Rochon as his wife Lucia. 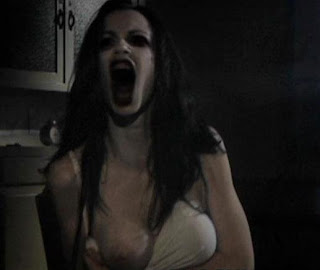 The score by Marco Werba enhances the unsettling visuals and when it isn’t reaching shrill, ear-splitting proportions and racking up the tension; it unfurls with sinister menace, drowning proceedings in a queasy creepiness.

The film is set in Italy during WWII and there is an interesting subplot involving Teresa, a young Jewish woman hiding from Mussolini’s fascist militia. This places the story in a time already weighed down with dread and oppression, even before the characters are consumed by the odious Colour. This plot-strand could perhaps be read as a hint that the Colour is much more evil and cruel than some of the atrocities carried out by man… The only difference is that the Colour does not discriminate in its slaughter.

A scene towards the end of the film is perhaps one of the most ‘Lovecraftian’ I have ever seen. As the neighbour makes his way to the farm, the surrounding countryside is shrouded in an eerie and strangely coloured mist. Darkness reigns, and everything is dank and suffocating. This new alien landscape that surrounds the farm is particularly effective when compared to the opening scenes of the film, when the farm is awash with sunlight. The idea that this bizarre phenomena came from under the earth, when it itself is so unearthly, is effectively chilling and subtly taps into Lovecraft’s misanthropic views that our existence is much less significant than we believe it to be; we are but specks of dust freefalling through the cosmos unaware of greater powers that seek to harm us. The place we inhabit in the universe is absolutely pathetic compared to some of the other things that lurk just out of sight - on the periphery of all things, biding their time. Watching. Waiting. Sometimes, just sometimes, they cross over into our realm, and as conveyed in this particular tale, the results are devastating.

In his story The Call of Cthulhu, Lovecraft wrote ‘The most merciful thing in the world, I think, is the inability of the human mind to correlate all its contents. We live on a placid island of ignorance in the midst of black seas of infinity, and it was not meant that we should voyage far.’

Madness is a recurring theme throughout his work; various characters inhabiting his stories lose their sanity because they have acquired certain forbidden knowledge, or have just sneaked a mere glimpse at unspeakable things they have no comprehension of. This is all masterfully extolled in Colour From the Dark, which is perhaps one of the most faithful adaptations of any Lovecraft story.
The closing lines of the film: ‘It gets inside you. It sucks the life out’ actually reflect what the film itself does with its unrelenting moodiness, doomed hopelessness and utterly bleak denouement. Something that surely would have brought a wry smile to Lovecraft’s own pessimistic lips…
Adaptation Colour from the Dark Debbie Rochon HP Lovecraft Indie Film Italian Horror Ivan Zuccon Low Budget The Colour Out of Space

The Headless Werewolf said…
It's so good to know that this film turned out well. As someone who thinks highly of THE SHUNNED HOUSE and NYMPHA, I'm very much looking forward to this.
15 July 2009 at 22:58

James Gracey said…
I'm not too familiar with Zuccon's other films, but I was really impressed with this. So low-key and creepy, and despite a low budget - it looks so atmospheric. Fingers crossed - there may be more from Zuccon on Behind the Couch soon...
17 July 2009 at 15:14