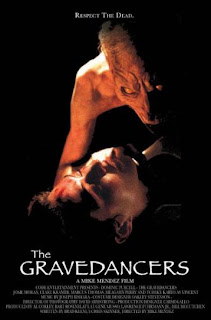 When their friend dies in a car accident, Harris (Dominic Purcell), Kira (Josie Maran) and Sid (Marcus Thomas), three old college friends, reunite at his funeral. They decide to catch up and give their friend a fitting send off; so after the funeral they head back to the cemetery with lots of wine, good intentions and high spirits. When they discover a strange poem on an anonymous sympathy card, urging them to celebrate life and dance on the graves of the dead, they do so. A few days later our revellers are terrorised by the ghosts of the people whose graves they danced upon. Desperate, the trio turn to a paranormal investigator to help them break the curse and save their souls…

Director Mike Mendez moves away from the overtly comedic aspects of his earlier outrageous shocker The Convent, to craft a genuinely dark and thrilling film.
After a spectacularly intense and nerve-rattling opening in which a young woman is brutally murdered by an unseen force (recalling the grisly opening scenes of Dario Argento’s Suspiria) the film takes its time to establish characters and story in the moodiest way possible. At first they think it is just a series of bizarre coincidences: Alison (Clare Kramer) even suspects that Kira, Harris’ ex, is stalking her and hiding in the house to try and drive her away from Harris. The sense of paranoia and warped perspective is nicely realised. Mendez manoeuvres his camera stealthily throughout proceedings like the waft of an eerie breeze. It prowls along the floor, up stairs, peers around doors and walls, over the shoulders of actors and generally sets the viewer on edge. 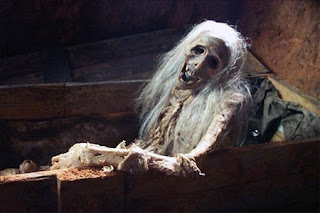 The film’s look belies its low budget and the array of special effects on display are masterfully handled: even the nightmarishly large disembodied head that plunges after the survivors as they make their frantic getaway doesn’t seem that ridiculous in the context of the story. The first act concentrates on the characters’ growing awareness of their predicament and Mendez handles this with a slow-burn approach, racking up the tension and jolting the nerves every now and again. This dark atmosphere, bloated with dread and an unsettling stillness, is maintained until about two thirds of the way through and then Mendez lets rip with a full-on assault of shocks, blood, genuinely menacing ghosts and a good old fashioned haunted house finale.

The ghosts, when they are finally revealed in all their grisly glory are a sickeningly gruesome lot: an axe-wielding murderess, a disturbed pyromaniac and a sadistic sex offender. The chilling visage of each of these spectral fiends is reminiscent of the ghoulish medium in the Drop of Water segment of Mario Bava’s Black Sabbath anthology: all wide toothy grins and bulging eyes. 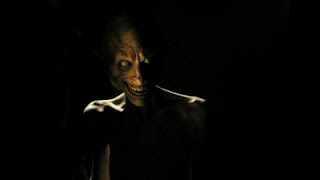 There is a distinct touch of the gothic about The Gravedancers. It harks back to a certain era of horror cinema without seeming contrived. A number of scenes featuring Harris and his wife Alison being menaced in their own home deploy that old faithful gothic-horror stalwart of the piano that plays spooky music until someone walks into the room and then it stops. The film is peppered with moments of doors slowly opening into darkened rooms; the camera hanging back and hovering cautiously as though anticipating something jumping out at us.

The music and sound effects also work to enhance the creepiness, every little creak or rumble is designed to set the audience on edge. Of course, as mentioned, the film isn’t all quiet eeriness and foreboding: as events rush towards the climax and the special effects are given more screen-time, The Gravedancers begins to resemble a jolting ghost-train ride – exciting, a little unsettling but never anything short of fun. While it doesn’t display the bawdy humour of The Convent, the film still retains a kind of irreverent humour akin to the likes of Drag Me To Hell or The Frighteners.

One of the stand-out scenes unfolds in the hospital where Kira is recuperating after her attack. As Alison wanders through the empty corridors waiting for Harris, she finds a body on a stretcher covered in a white sheet. As she cautiously approaches, the sheet becomes soiled with copious amounts of blood as whatever is under it haemorrhages in a highly grotesque fashion. As she turns to call for help, the body sits up and what follows is brief but shocking. 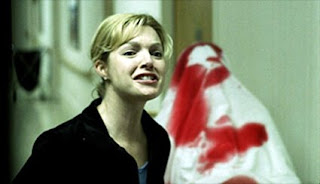 Another taut and frenzied moment occurs when Kira is attacked by some invisible force in her hospital room and an innocent nurse is dragged into the fracas with bloody consequences. As Alison, Clare Kramer gives one of the best performances in the film, quite reminiscent of Sheryl Lee. Also worth mentioning is Megahn Perry as Frances, one of the paranormal investigators. She was also one of the standout performers in Mendez’s earlier film The Convent, and she exudes a similar wit and charm here, too.

The Gravedancers is a well written, well oiled thrill ride. When it comes to delivering goosebumps and jolts, Mendez really knows how to deliver. The film was unsurprisingly one of the featured titles in the 8 Films to Die for at the After Dark Horrorfest in 2006, alongside the likes of The Abandoned and Penny Dreadful.

The Headless Werewolf said…
I really enjoyed this one as well. The film's promotional art, which you've posted, is depressingly bland. Sadly, that's true for most films today. I really miss the days when some heart and imagination went into a one-piece.
23 July 2009 at 21:36

Mykal said…
James: a bit off topic for this post, but just to let you know: I have signed up for notification via Amazon here in the USA when your book on Argento is released here in the States. I look forward to it, and will get it the moment it becomes available through Amazon US. I am very eager to read it. -- Mykal
24 July 2009 at 00:24

James Gracey said…
Werewolf: I actually quite liked that image - the way the demonic creature looms out of the dark evokes all kinds of creepy connotations. And the way it leers over the sleeping/possibly dead woman reminded me a little of Fuseli's painting The Nightmare. Its a much stronger image than the one used on the DVD cover... which you can see here http://www.imdb.com/media/rm3927544320/tt0435653

Mykal: The book should hopefully be published in September. I submitted the last updates (including a section on the new film, Giallo) a couple of weeks ago. I'm just waiting for the editor to typeset it and send it back for more proof-reading fun.
Thanks for your support - I really hope you enjoy the book when you get your hands on a copy.
Thanks again. :)
Best wishes,
James
24 July 2009 at 11:35

Matt-suzaka said…
I thought The Covenant was a great and very fun film from Mendez; it had some creative ideas and considering the obvious budgetary restraints, the film is pretty well made. I thought the opening with the Barbeau character Nun slaying opening was fantastic, disturbing, yet hysterical.

I think Gravedancers was a fantastic follow up with how completely different it was in tone and style to The Covenant. Really shows the skill and filmmaking knack that Mendez has with yet again a pretty low budget. Gravedancers is also proof that there are plenty of great and original horror films to be found out there. I eagerly anticipate anything Mendez does, as he is a true horror filmmaker that loves and respects the genre. He also directed the Boogeymen II horror film documentary 'Masters of Horror' for Cinemax or one of those movie channels.
Great review for a great film, James!
28 July 2009 at 20:34

James Gracey said…
Cheers Matt. The Convent was one of my favourite films at uni... Great fun to watch with friends and wine... Everytime I hear that song by Lesley Gore I am instantly reminded of Christine gleefully blasting away those nuns.
I hope to post a review of it over the next few weeks - any excuse to revisit it.
Mendez really delivered with Gravedancers - I too eagerly anticipate his next project - I reckon he's one to keep an eye on.
2 August 2009 at 12:54

James Gracey said…
Give it another chance, Cody! It's a fun fright-flick; nothing too taxing. Plus, anything with Megahn Perry in it gets my vote. Love her. Have you seen The Convent?? :)
19 March 2011 at 11:52