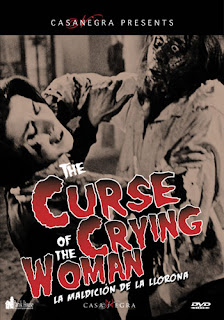 Amelia (Rosa Arenas – The Witch’s Mirror) and her husband Jaime are invited to stay with Amelia’s estranged Aunt Selma (Rita Macedo). The mansion Selma resides in has a creepy reputation amongst the locals and a number of grisly murders in the area enhance their suspicions of Selma’s dubious practices. Amelia eventually unveils dark secrets about her lineage, and even more disturbingly, the sinister intentions her Aunt harbours. Selma informs Amelia of their family’s turbulent past: Selma's mother was the Crying Woman, a witch who fraternised with the devil to obtain immortality. After a string of brutal murders, she was found guilty by the townspeople and killed. Amelia is the last descendant of the Crying Woman and Selma intends to resurrect the spirit of her mother so she can possess Amelia and continue her reign of terror.

The figure of La Llorona (The Crying Woman) has a rich and significant presence in Spanish folklore. Amongst her many titles she also goes by ‘The Woman in White’ and ‘The Weeping Woman.’ La Llorona is rather akin to the Irish Banshee in that her haunting wailings foretell death to all who encounter her, as she will inevitably lead them to a watery grave.

The origins of La Llorona have their roots in Mexico, and amongst the many accounts of her conception lurks the same central image of a woman wailing for her dead children. The basic story (and there are many variations) is that a young woman marries or is seduced by a man who either leaves her for another woman or flees because he resents his parental responsibilities. Rather than see her children grow up in poverty and squalor, she drowns them. Eventually driven insane by loss and overwhelming guilt, she drowns herself, only to return to haunt the earth as a spectral wailing mother futilely searching for her children and drowning anyone unfortunate enough to encounter her. 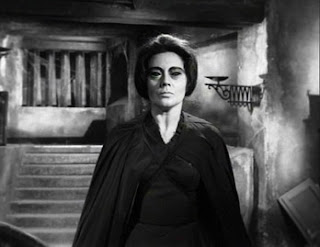 La Llorona has been a popular figure in Mexican and Spanish horror cinema throughout the years. From 1933’s La Llorona to the more recent Haunted From Within (2005), Llorona the Wailer (2006) and Kilometre 31 (2006); this eerie and melancholy spectre has spooked audiences throughout the world for some time now. Perhaps one of the most effective films based on the premise of la Llorona, is Rafael Baledon’s The Curse of the Crying Woman.

Baledon was a sort of Mexican Roger Corman renowned for his prolific output and reputation for getting films finished on time and under budget. No stranger to horror (Baledon also directed the fabulously titled The Hell of Frankenstein, The Man and the Monster and Swamp of the Lost Souls), The Curse of the Crying Woman was perhaps his most accomplished genre film and one that earned him a cult following.

The film opens with the murder of a coach-load of people travelling through a sinister mist-shrouded countryside at the hands of an eyeless banshee and her deformed henchman. The sight of the imposing and eyeless Selma with a group of Doberman dogs on leashes is incredibly striking and provides a significant nod to Mario Bava’s Black Sunday. Indeed, much of the film resembles the work of Bava, with its foreboding house, long cobwebbed corridors, dreamy lighting and special effects and its tale of a cursed family dabbling in witchcraft. Baledon imbues his film with a bizarre Latino-Gothic atmosphere all of its own. The film overflows with imaginative and downright creepy imagery; particularly that of an eyeless Selma in full-on Crying Woman mode and the various spooky encounters with mirrors throughout the house as they reflect Amelia as a warped and eyeless old hag. Events unfold within the confines of the sprawling house and when they spill outdoors they unfurl in highly atmospheric, misty and downright oneiric sets. The special effects aren’t as artfully realised as the likes of, say, The Witch’s Mirror, but they still remain effective enough to ensure the film retains its creepy atmosphere and otherworldly ambience. A particularly mesmerising shot occurs when Amelia makes a bid to escape and runs out of the house into the surrounding countryside. As she fights the apparently hereditary will to do evil, the space around her swirls kaleidoscopically with images of unblinking eyes in an impressive exhibition of light and sound. 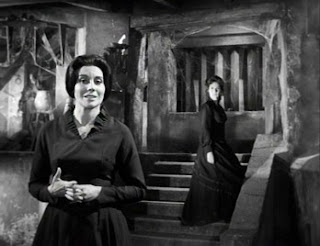 When Selma reveals her warped plans for Amelia the film becomes a somewhat more conventional affair as Amelia races against time to try and save herself and her husband from eternal damnation. Jaime proves to be one of the most ineffectual lugs ever committed to celluloid. When he is not patronising Amelia and accusing her of irrationality, he gets himself into all sorts of dire situations: whether it’s falling under the power of Selma, or tumbling from the bell-tower – he constantly relies on Amelia to come to his aid. He and Selma’s manservant feature in an exceptionally prolonged fight scene as the haunted mansion crumbles around them. He also has an unintentionally funny encounter with a very fake bat…
And then there is Selma’s deformed and raving mad husband locked up in the attic who gains a fair bit of sympathy despite rather bad make-up effects.

This film really belongs to Rosa Arenas and Rita Macedo though. Both play determined, resilient women who will stop at nothing to achieve their heart’s desire. The men in their lives are either subservient or just powerless to intervene in the diabolical proceedings. Arenas, who was rather good in The Witch’s Mirror, relishes playing the more active Amelia. As the evil Aunt Selma, Macedo is especially commanding. 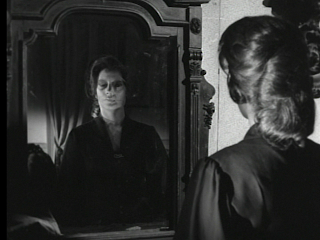 The Curse of the Crying Woman is an enjoyable piece of High Gothic cinema and a great introduction to Mexican Horror. It retains an endearing charm and beguiling allure, and it works well with The Witch's Mirror as part of a winning double bill.
Banshee Family Curse Family Horror Folklore Mexican Gothic Mexican Horror Sixties Horror