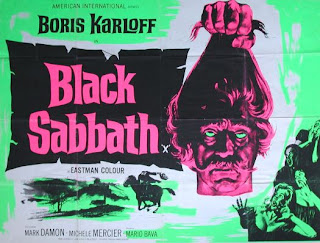 Mario Bava’s anthology Black Sabbath consists of three quite different tales of horror. The Telephone - the story of a woman who may or may not be receiving sinister phone calls from an escaped lunatic; The Wurdalak – a creepy yarn involving vampirism, a doomed family and the recent return of their undead patriarch – played with diabolical glee by Boris Karloff; and finally, The Drop of Water – the supremely unsettling story of a nurse who steals a ring from the deathbed of a medium, only to suffer the ghastly consequences in the privacy of her own home.

Each segment of Black Sabbath has its own unique tone and look, from the kitsch glamour of The Telephone to the high gothic atmospherics of The Wurdalak and the opulently stylised The Drop of Water. As a whole, the film is rather satisfactory and none of the segments outstay their welcome. What makes it all even more appealing is the introduction by none other than Boris Karloff himself, waxing lyrical on the mechanics of fear. Each segment contains its own fair share of nightmare-inducing moments, all beautifully captured by Bava’s ever prowling camera, and rendered dreamlike in the vivid lighting. However it is during The Drop of Water that one of the creepiest images from Bava’s seductive body of work, and possibly from horror cinema, is luridly revealed.

When she is called late at night and asked to prepare the recently deceased body of a local medium, Helen leaves the cosiness of a night in, crocheting and sipping brandy (a kindred spirit, obviously), to embark on her journey. Arriving at the dead woman’s house she is let in by a maid and makes her way through the opulently candy-coloured and cat strewn hallways to the bedroom of the medium. We are as shocked as Helen is to see the morbidly grinning death-face of the medium as she lies propped up on her pillows. 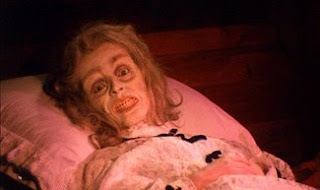 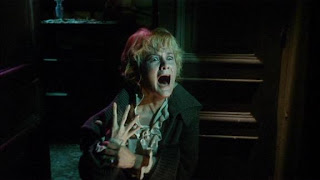 Going about her business, Helen notices an ornate ring that she decides no one will miss, and she takes it from the dead woman’s finger.

Returning home, Helen is plagued by the sounds of a dripping tap and the memory of the ghoulishly grinning dead woman. Eventually, her nerves in tatters, Helen realises, too late, that stealing from the dead is just not cool. Seeking sanctuary in her bedroom she sees the spectre of the medium grinning from the bed and then rise up to float menacingly across the room towards her. This all proves too much for Helen who instantly drops dead of fright. When her body is discovered the look of horror on her face still remains… Chilling stuff.

I Like Horror Movies said…
One of my absolute favorites, The Wurdulak is one of the single greatest vampire entries in the genre!
17 July 2009 at 00:23

James Gracey said…
I adore The Wurdulak - everything from the bleak story, to the gorgeous lighting to the heart-pounding score. And Boris Karloff, obviously. A mini-masterpiece!
Thanks for dropping by Carl. :)
17 July 2009 at 15:16

AndrewCroskery said…
Saw this a while ago in the Black Box on one of their Sunday night shows. Twas good, particularly The Wurdulak. We had gone expecting Svankmajer's Faust, but it was a pleasant surprise none the less.
18 July 2009 at 23:44

Matt-suzaka said…
I love anthology films, and Black Sabbath is one of my favorites. I love the E.C. comic’s feel of the movie, and I am a big fan of Bava and his use of colors in this film in particular.

For as old as it is, Black Sabbath holds up pretty well, and still remains quite scary...especially the freaky looking medium that you mention in your post.

Unknown said…
I saw Black Sabbath when I was around nine years old (1973) on network television one innocent Sunday morning. Nowadays nothing scares me, real or contrived. After recently watching this great film again I realized that the one, and the only, nightmare that I continue to have to this day (once every year or two) was born from 'The Drop of Water'. The initial sight of the dead medium, the large strangely lit bedroom, the floating menace, all are there. Terrifying stuff.
Jamie Paich
12 November 2016 at 03:33

Unknown said…
I'd like to know which actress is playing the dead psychic? When she rises from the bed, someone is playing that role and I can't find that answer anywhere...could it be Harriet Medin?
14 January 2017 at 15:44

James Gracey said…
Hi Lewis. According to Tim Lucas's book 'All the Colors of the Dark', the dead medium was actually a life-size dummy sculpted in wax. Three heads were made - one with eyes open, another with eyes closed, and a third, a latex mask worn by an uncredited performer, for shots that required movement (when the medium sits up in bed, rocks in her chair etc). Harriet White Medin played nurse Chester's landlady/concierge in this segment - she's the one who steals the ring from the dead nurse's hand at the end... Hope this is helpful!
16 January 2017 at 12:51

Unknown said…
Hi James, Thanks so much for this info, ever since I saw this scene many many many years ago I have been wondering who was playing that scene when she rises up in that bed and never found an answer...Thanks for clearing this up in my mind, now I can watch it with a different view...

Have a nice day

James Gracey said…
Hi Lewis. I had a look at Tim Lucas's 'All the Colors of the Dark' but there doesn't appear to be any information on the little kid who played Ivan. Lucas does, however, note that 'Ivan [...] is the first of Bava's 'spectral children', a presence that would recur more than once in later films and always with special meaning'.
6 April 2017 at 21:42

Unknown said…
Oh how I loved staying up late to watch scary movies on TV when I was a kid in the 1970s. Boris Karloff was my favorite. So when I saw in the TV Guide that he was in Black Sabbath I wouldn't miss seeing it for all the tea in China. The first to films in the trilogy were good scary fun, but the third, The Drop of Water scarred the living daylights out of this 10 year old boy! That death grimmace featured in my nightmares for years. And the way the dead medium floated across the floor just struck shear terror into me. Those, in my opinion are the scariest images in any horror film. And I've seen them all.
26 April 2017 at 20:51

The Grand Moff Tarkin said…
I saw this in the theater when I was very young (probably in the mid 60s). The image of the dead medium scared the hell out of me. I still remember how much it frightened me.
27 October 2020 at 01:23