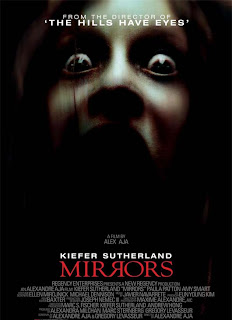 When he is suspended from duty after accidentally shooting his partner, former NYPD detective Ben Carson (Kiefer Sutherland) gets a job as a security guard at a deserted department store. Determined to put his life back on track, kick his alcoholism and rejoin his estranged family, Ben soon becomes obsessed with the mirrors in the building and the strange visions they seemingly reflect. With no one to believe his wild stories, he sets out to solve the mystery of what lurks within the mirrors before his mind unravels completely…

After kaleidoscopic opening credits and a rather unsettling and menacing scene set in the underground, Mirrors, and what could potentially have been a supremely creepy and subtly chilling film, soon descends into cheap jumps, cardboard characters and some really quite lazy writing that explains everything in trite exposition, because, you know, we’re just too dumb to be able to follow the story or piece together some information.

Director Aja doesn’t display anything that even remotely resembles the directorial flair he exhibited with the likes of Switchblade Romance; and considering the fun he could have had with all the mirrors in the film and the potential to have some really interesting shots and camera work, everything just looks so conventional and uninspired. All too often Mirrors resorts to frantic scenes with increasingly swelling music imploring us to be afraid and Kiefer Sutherland running around wailing about ‘The mirrors! The mirrors!’ Even the quieter scenes that should be full of foreboding just seem dragged out, with the obligatory punctuation of sudden loud bursts of music to cut through the tedium. There are a few genuinely unsettling and grisly moments, particularly the demise of Ben’s sister, whose jaw is ripped open by her own reflection. Or something. 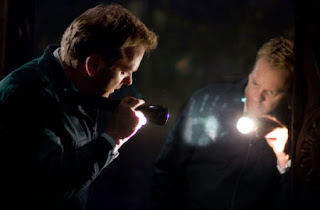 The film is at its most interesting when we enter the former department store and the overwhelming sense that we are traversing into something completely ancient and otherworldly saturates these scenes. The majority of the story unfolds within the vast and creepy neo-gothic building that used to be a psychiatric hospital – where, wouldn’t you know it, morbid doctors conducted immoral and bizarre experiments on their schizophrenic patients. The security guard showing Ben around intones lots of creepy stuff about how the previous guard became obsessed with the mirrors and stayed up all night polishing them. Any vague intrigue that could be established concerning Ben’s mental instability and whether or not the things he sees are the result of his fractured and damaged mind, or really are supernatural, is pretty much crushed straight away. We know the occurrences are supernatural, not only because of the sinister opening scene, but also because of the shot of a mirror rippling and pulsating ominously.

The all too brief discussions of the significance of mirrors in mythology and folklore provide the film with some of its most intriguing moments. The belief that if someone is caught between two mirrors their soul will become trapped, and the connections of reflections/doubles/doppelgangers with impending death proves quite shuddersome too; however these ideas are never really fully explored. The concept of a whole other world existing behind mirrors is also just mentioned in a rather throwaway fashion and then simply cast aside altogether in favour of some more frantic scenes with Kiefer running around again, panting and covering up mirrors in a bug-eyed and sweaty manner. The film also relies too heavily on bargain-bucket psycho-babble, as various characters critique the significance of mirrors and ‘self-examination.’
A vague attempt at ‘light relief’ occurs when Ben is frantically driving to his wife’s house and glances in his rear-view mirror. We are treated to a shot of the little warning sticker exclaiming ‘Objects in mirror are closer than they seem.’ Indeed.

In Ben Carson we have a potentially interesting protagonist: a troubled man trying to piece his life back together after a series of unfortunate events brought about by his alcoholism. Sutherland’s performance is suitably twitchy and nervous however as the story continues to unfold, he simply becomes more cartoonish. This is down to the ridiculous lines he has to utter and the cringe-worthy actions his character must carry out, not Sutherland’s otherwise perfunctory performance. You see, Ben decides the only way to remain safe from the mirrors is to try and establish some sort of matte world in which there are no reflections. He sets about painting over everything shiny; neglecting of course the horrifying potential that his cutlery may never be usable again. When he discovers a mirror filled chamber behind an old crumbling wall in the waterlogged basement of the store, the film goes a bit Ringu. Ben soon discovers that the mirrors are haunted by the souls of those patients who suffered slow and unnecessary deaths at the hands of their sadistic doctors in the hospital. They seek their revenge from the limited reach of reflective surfaces. 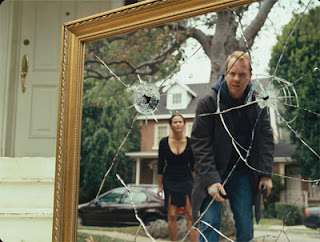 As events rush ever more to their inevitable conclusion, everything falls into a crumpled heap of demons, nuns, otherworldly thresholds and redneck possessions, with dreary people gloomily exclaiming stuff like ‘We took her where the mirrors couldn’t find her.’ As the opposite of tension mounts ever higher, Ben’s family become imperilled in their own home. The film now takes on a Poltergeist-like narrative of ‘family-persecuted-in-their-own-home', as unseen forces leave the taps running and ruin the expensive floors. Cue much cowering and running from reflective surfaces. Things come to a head with a tacky happy ending. But wait! No. Things come to a head in an ending that lacks the chills, and indeed poignancy, it was striving for. Bittersweet this is not.

Essentially a convoluted tale of possession and revenge, Mirrors contains far too much smoke and nowhere near enough mirrors. If I could be bothered to, this is the point at which I would insert an amusing pun about how ‘unpolished’ a film Mirrors is. But like I said, only if I could be bothered.

James Gracey said…
I had quite high hopes for Mirrors - I thought it sounded like an interesting and potentially very creepy story. I really loved Switchblade Romance and thought The Hills Have Eyes was quite underrated. Alas, my hopes were essentially urinated upon from a great height.
Thanks for stopping by!
21 July 2009 at 23:51

James Gracey said…
Indeed! Such wasted potential. I recently came across this site http://www.mania.com/mirrors-2_article_112610.html
The reviewer came up with some ideas for a potential sequel. It made me smile so I thought I'd share... Enjoy.
2 August 2009 at 13:05