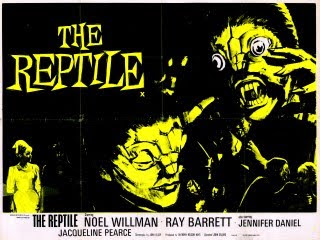 Harry and Valerie Spaulding move to the small Cornish village of Clagmoor when they inherit the house of his brother – who died under mysterious circumstances. Treated with contempt and mistrust by the villagers, Harry and Valerie are shunned. To make matters worse, a number of locals have been turning up dead, with mysterious bite marks on their necks. Harry’s investigations lead him to the home of the sinister Dr Franklyn and his mysterious daughter Anna, and he soon uncovers the horrific secrets of an ancient curse and a monstrous reptilian creature with a taste for human blood!

Filmed back to back with Gilling’s Plague of the Zombies, using the same sets and several of the same cast members, The Reptile is perhaps one of Hammer’s more overlooked gems. Often unfavorably compared to Plague of the Zombies, the film nevertheless still manages to entice the viewer into its tightly coiled mystery with an alluring atmosphere and a number of compelling performances – particularly Jacqueline Pearce as the unfortunate Anna.

Opening with an intriguing prologue in which a man wanders across the beautifully desolate Cornish countryside and into a sinister mansion only to be set upon by a hideous, albeit briefly glimpsed creature that tears at his throat and sends him crashing to his death down an ornate staircase. Soon after, Captain Harry Spaulding (Ray Barrett) and his wife Valerie (Jennifer Daniel) move to town. It turns out the unfortunate victim of the mysterious beast prowling the halls of the mansion was Harry’s brother Charles, and Harry has inherited his house. The story follows Harry and Valerie as they attempt to settle into their new life in Clagmoor, find out what happened to Charles and be treated with hostility and suspicion by the locals. 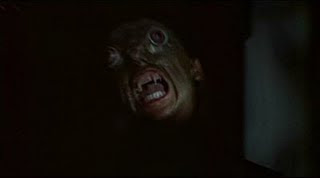 Whilst the Spauldings set up home a number of villagers suffer similar fates to that of Charles and their bodies are found with puncture marks on the neck, blackened skin and foaming mouths – these murders are amongst the nastiest dreamt up by Hammer. Our intrepid outsiders soon realise that something sinister is afoot and their investigations lead them to the mansion where Charles died. Its occupants – Dr Franklyn (Noel Willman), his daughter Anna (Jacqueline Pearce) and their mysterious servant The Malay (Marne Maitland) are also shunned by the villagers and have become recluses. Franklyn is a doctor of Theology and has explored the world researching strange cults and religious sects. He is highly protective of his daughter and it transpires that as a result of his interference with a bizarre cult, she was cursed to periodically transform into a ferocious reptilian creature. When in reptilian form, Anna is susceptible to cold temperatures and the house is constantly heated and festooned with tropical plants and foliage. 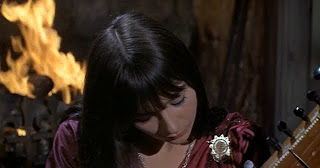 The Reptile musters and sustains a bizarre and exotic atmosphere throughout, helped along by an evocative score by Don Banks. The same sexual undertones that are laced throughout many of Hammer’s horror productions are also present here. A stifling claustrophobia hangs heavy over the house of the Franklyn’s and a particularly humid scene unfolds as Harry and Valeria are invited to dine with the doctor and his daughter. Gathering around a roaring fire in an already overheated house, Franklyn explains to a formally dressed and profusely sweating Harry that the temperature must remain high as he and his daughter have become accustomed to warmer climes in their travels. As Anna entertains the wilting guests by playing a sitar-like instrument, she becomes whipped up into an entranced frenzy, and the already heated, sexually charged climate within the house becomes unbearable, until her father snaps and demands she return to her room without super. 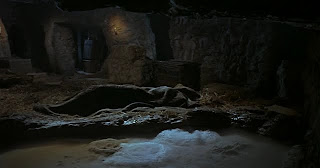 The Reptile is essentially a vampire film but with a strange reptilian creature causing havoc and ripping out the throats of victims. Gilling utilises similar clichés found throughout the genre, such as the locals giving the outsiders the cold shoulder when they enter the village pub to ask for directions. When we finally see Anna in reptilian form, the make-up effects are bizarre enough to intrigue. A couple of grotesque moments occur when ‘something’ is seen writhing beneath a dirty blanket in the cavernous basement of the house and even more unsettling, when Franklyn discovers what looks like a discarded skin lying on his daughter’s bed.

At its heart beats a flurry of ideas concerned with Colonial revenge and foreign threats to stiff-upper-lipped British society. A number of films during this time had similar themes and ideas, such as The Ghoul and any number of Dracula films – the threat always entering Britain was from abroad.

Jenn said…
It's been years since I've seen this - and I own a copy! Might just have to revisit soon. The titular Reptile looks so cool - if I end up watching this again and loving it more than ever, he'd make a nice tattoo.

James Gracey said…
Hey Jenn, thanks for stopping by. I'd read good things about this and was quite eager to see it. I enjoyed it a lot. It has subsequently instigated a bit of a Hammer-athon, which is always a good thing. And yes, the titular Reptile would make a fine tattoo!
Hope all is groovy with you ;)
9 September 2009 at 13:00