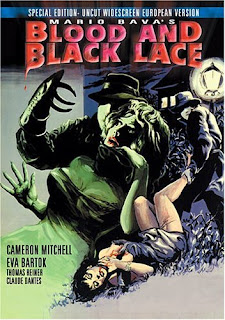 AKA
Sei donne per l'assassino
Fashion House of Death

A beautiful young model is murdered by a mysterious masked figure in a raging storm outside the tres chic fashion house where she worked. When her boyfriend is suspected of the killing, her diary - which contains incriminating evidence linking her to the killer - mysteriously vanishes. The masked killer begins violently murderlising all the models at the house in an attempt to find the diary and keep their identity a secret. Surely someone will be able to stop them before its too late and the fashion house of models becomes a terror house of blood!!

Blood and Black Lace really cemented the conventions of the giallo with its overwhelmingly stylish and chic design and it’s opulent depictions of various characters falling victim to a black gloved, sharp-implement wielding sadistic lunatic. Essentially just a really stylish ‘body count’ movie, Blood and Black Lace really marks the first time that Bava would take this approach to his storytelling, paying little attention to plot or characterisation. Unlike his prior venture into the embryonic giallo genre, The Girl Who Knew Too Much, the emphasis in Blood and Black Lace is not placed on the mystery and the process of solving it - like almost every ensuing giallo movie, more significance was placed on the murders themselves as the increasingly convoluted and lightweight narratives took a back seat. Bava would take this approach to its logical and minimalist conclusion with films such as Bay of Blood - a film designed solely around it’s baroque death scenes. 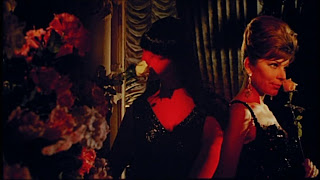 With Blood and Black Lace Bava has created an insanely lush and gorgeous looking film - every frame is draped in style and elegance. Even the name evokes sensual and daring imagery. The lighting scheme would become quite typical for Bava - certainly not naturalistic but undeniably atmospheric, and he has created a rich and stunning looking world in which dark fantasies and bloody murders are carried out with theatrical aplomb. Of course it is all shot in glorious close up and seemingly lit by something altogether infernal, seething and raging just off screen, in reds, blues and throbbing greens. Elsewhere the film is impossibly glamorous, seductively lit and resplendent in its grandiose set design.

As with later thrillers such as 5 Dolls for an August Moon and the aforementioned Bay of Blood, Bava has orchestrated, a stylish, elegantly lensed and deliriously kitsch murder mystery film - with the emphasis placed firmly on the murders, and not so much the mystery. The director composes his shots much like an artist would create pictures on a canvas and he seats, stands and perfectly poses his actors within the frame of each shot as though they were models in a life drawing class, resplendent and chic. Bava even goes as far as highlighting the fact that the characters and plot and have been pushed to the background in favour of shocks and chills, in the beautifully kitsch and strangely moving opening credits. 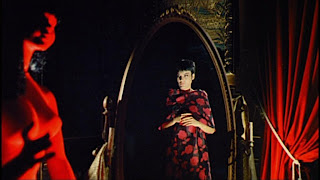 The lead actors are all filmed standing beside dress-makers dummies and spooky wicker mannequins lit in a livid red light - they are themselves merely ‘props’ that Bava moves around his exquisitely shot film - they are only there to be killed in glorious and colourful close-up. The ‘actor as prop’ ethos would also be picked up later by Dario Argento, as his films also increasingly lost focus on plotting and characterisation. His actors were there simply to act as objects around which he could move his camera in ever imaginative ways. Again, as in 5 Dolls for an August Moon, Bay of Blood and The Girl Who Knew Too Much - Bava exhibits a pitch black sense of humour that perfectly matches the dastardly deeds of corruption within the story. 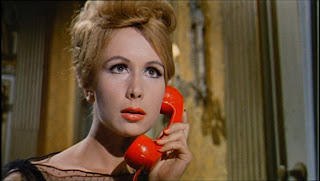 The ‘whodunnit’ aspects of the story really fuel the mystery. At various stages most characters are revealed to have some sort of motive. Knowing looks and sly glances are exchanged and people do things that initially seem suspicious but are then revealed to be completely innocent a few scenes later. The mystery is retained until about three quarters of the way through the running time before Bava just simply reveals who the culprit is and what their motives are. Voila! He is still able to ratchet up the tension though by throwing another twist into the mix and he also has some fun and produces a couple of well timed jump moments, with the film’s elaborate mise en scene as there is usually something bizarre, such as a mannequin, in the forefront of various shots that prove quite striking and startling when revealed.

The killer in Blood and Black Lace, while exhibiting what would become the required uniform for many future giallo killers: black leather gloves, fedora and rather fetching trench coat (well they are bumping people off in fashion house!), also boasts an alarmingly blank white face-mask. Unusually though, this killer is spurned to bloody action by greed and lust, not by some dark and deranged Freudian past trauma. 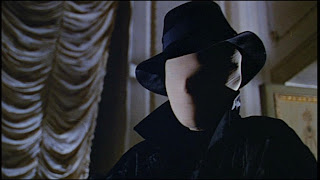 One particularly striking and ominous moment comes when one of the models walks through a dark antique shop in the middle of the night, a blue-green light from a neon street sign outside slowly pulses on and off, like some sort of ethereally silent siren. The attack on her is particularly vicious and Bava even references one of his own most iconic cinematic moments with the use of a bizarre medieval type glove with spikes on the inside of it. The sight of this spiked thing slowly, surely advancing towards the face of the imperiled character echoes Barbara Steele’s shocking fate in the opening scenes of Black Sunday.

With Blood and Black Lace, Mario Bava further fleshed out the infant giallo flick and with it he laid down the gauntlet to filmmakers such as Dario Argento, Sergio Martino, Lucio Fulci and Aldo Lado. The gauntlet would of course be picked up, doused in blood, eroticised fervor and stunningly elaborate violence and bandied about for some time to come…

Shaun Anderson [The Celluloid Highway] said…
One of the defining films of the 1960's in my opinion. From a visual and stylistic viewpoint this is the moment at which popular Italian cinema fused with art cinema. Proving there is very little difference really between Bava/Argento and more esteemed directors like Visconti, Antonioni and Fellini. I love the way the set pieces last far beyond their narrative justification - attaining as a result a poetic quality.
4 March 2010 at 15:59

Franco Macabro said…
Grazie in deed! I love the colors in those picks, those reds mixed with all the blacks!

Thanks for these Bava reviews youve been posting! They pump me up to continue down my journey of discovery with Bava films!
4 March 2010 at 17:29

James Gracey said…
Shaun I love what you said about the way the set pieces last far beyond their narrative justification - so true! But that can be excused on the grounds that it all looks so bloody beautiful. ;o)

TFC - Thanks muchly! Those pics are pretty damn groovy, aren't they?
I hope you continue to enjoy your journey of discovery through Bava movies! I look forward to reading your posts about them too.
5 March 2010 at 11:09

Shaun Anderson [The Celluloid Highway] said…
I agree James - that is precisely where the beauty and poetry of these sequences lies. The opening murder in Suspiria took the Italian set piece to an incredible high. I think part of Argento's recent fall from grace could well be due to the fact that his set pieces lack the brilliance of earlier films - though Sleepless has a few decent ones.
6 March 2010 at 22:14

James Gracey said…
Good point Shaun - Argento hasn't really created many memorable or typically protracted set pieces for a while. I did quite like some of the flashback sequences in Giallo though - some of these really evoked memories of Vintage Argento.
7 March 2010 at 10:43

I Like Horror Movies said…
I enjoy Bay of Blood, but it doesnt hold a flame to Blood and Black Lace, the film is just strikingly beautiful and has quickly become one of my top Bava entries!
7 March 2010 at 18:04