The House with Laughing Windows 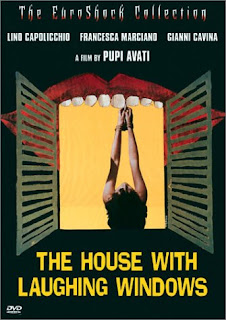 Struggling artist Stefano (Lino Capolicchio) is commissioned to restore a fresco in a church in a small rural town. The fresco depicts the brutally violent death of St. Sebastian. Stefano soon learns that the painter was a madman who, with the aid of his deranged and incestuous sisters, viciously tortured people to death as inspiration for his horrific paintings. A series of increasingly bizarre events, including a couple of grisly murders, convince Stefano that someone is trying to stop him from uncovering the town's depraved past. Can he and the town's new school teacher Francesca (Francesca Marciano) uncover the secrets of the house with laughing windows before it is too late!?

Stefano’s friend is also staying in town to recover from a nervous breakdown and study the local thermal springs. He warns Stefano not to talk about the fresco with anyone. Hushed warnings and dark insinuations such as these slowly conjure a heavy atmosphere pregnant with dreadful anxiety. Eventually his friend falls to his death after telling Stefano that he has discovered something ‘horrible.’ 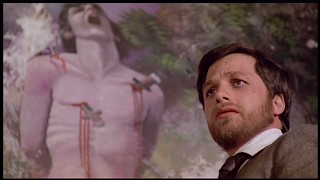 The House with the Laughing Windows starts as it means to go on – a deathly serious meditation on suffering, art and the power the past has over the present. A series of highly troubling images play out in burnished sepia tones beneath the credits. Anguished cries of pain erupt from a man hanging by his arms as knives are plunged into his naked flesh. As all this occurs a guttural voiceover intones ‘colours, my colours, they run from my veins, colours, sweet colours.’ The voice is later revealed to be that of Buono Legnani, the artist who tortured and killed his sitters in order to capture their death throes in his rhapsodic depictions of death and martyrdom. The notion of a ‘painter of the Agonies’ highlights the connection between art and death that is rife throughout Italian horror cinema and takes it to its logical conclusion – a painter who captures the essence of a person as they die, sometimes at his own hands. As Stefano explores the story of this artist and his sisters, things become more twisted and deranged and the mounting sense of doom suffocates all sense of hope – right up until the genuinely shocking climax.

Images are important in this film. Indeed, the way Avati frames his actors in certain shots creates a series of startling and beautiful images that add to the atmosphere of uneasiness – his masterful use of widescreen ensures the feeling that someone or something could jump into the frame at any time. An abundance of startling shots, particularly the one of Stefano as he is framed in his doorway unpacking his bags, somehow announces his vulnerability. Filmed from outside his bedroom door, the camera gently pulls back into the darkness of the house, framing the man and isolating him as though he were in a painting. 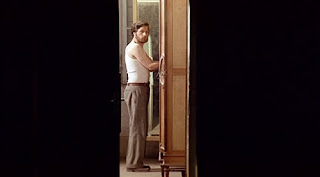 Set in the early fifties, the film can also be seen as a pointed allegory addressing Italy's post-war struggles. The townsfolk want to promote the town and increase trade and economy and the infamy of the artist who painted the fresco is one way of doing so. The town is, rather ominously, also famed for its ‘silence’. The town’s streets are deathly still and quiet – not that Avati ever goes out of his way to emphasise this – he does it masterfully enough so that it gradually becomes obvious just how empty and quiet things are. The impact is all the more resonant because of this subtlety.
The scenes when Stefano is alone in the church and his house at night are understated and unnerving, the camera watching him as it floats behind him in the darkness. And if his landlady is bedridden, who is it walking around at night? Even in the daylight hours there is a stillness that pervades and casts a foreboding presence over everything. 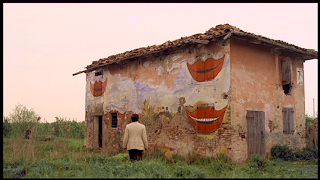 Because of the eerie stillness and quietness of the film, a couple of well timed and genuinely startling jump moments prove highly effective and practically echo throughout the rest of the silence of events. There is a lyrical, sun-kissed quality to some exterior daytime scenes – the picturesque landscapes and idyllic countryside that belie the unspeakable acts of violence and inhumanity that occur behind closed doors in the community. Events play out in sparsely furnished rooms that are given as much space on screen as the actors, as though they too have a part to play. The bloody actions these rooms have bore witness to and the ever darkening secrets they hide behind their walls and doors manifest themselves in the atmosphere that lurks in abundance within them. The faded grandeur and rustic excess of the vast and sparsely inhabited buildings also adds to the mounting sense of isolation.

There is a touch of Bava to several scenes, especially the scene in which Stefano becomes increasingly unnerved walking through the empty, eerily glowing and fog-hung streets at night, when he thinks he hears footsteps and breathing behind him. The seemingly spectral winds that blow through the soundtrack of this film recall Tourneur’s chilly use of sound in I Walked with a Zombie and The Leopard Man. Avati’s film certainly treads the same line of quiet menace and poetic dread. 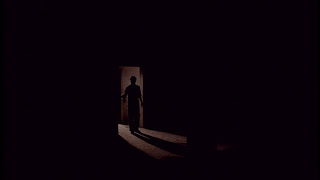 The lingering feeling that something isn’t quite right only increases as the story proceeds. When Stefano walks into a room it is easy to get the impression that someone has just left it – the mounting paranoia ensures that even when Stefano is alone, the way in which he is filmed indicates otherwise. The characters often talk about silence – particularly the silence that hangs heavy over the town. Silence is deafening and pervasive in this film. What is also noticeable is the film’s lack of music. The stark score consists of well timed one chord piano notes and a hypnotic Philip Glass-esque organ composition courtesy of Amedeo Tommasi.

‘Only a great artist can provide such a true portrait of death.’

The House with Laughing Windows is a truly unsettling and stiflingly atmospheric film that slow-burns its way to an unbelievably gruesome denouement. It provides a refreshing change of pace and tone from its gialli peers and stands out as a chilling and nightmarish tale that is in a class all of its own.

Shaun Anderson [The Celluloid Highway] said…
Great review James - this, along with "The Short Night of Glass Dolls", is my favourite giallo. A number of gialli were set in rural landscapes and this film makes an excellent companion piece to Lucio Fulci’s masterpiece "Don’t Torture a Duckling". Both show repressed communities simmering with barely concealed perversion and violence. Both also explore the steady encroachment of modernity as it does battle with more primal and superstitious values. This is an unforgettable and hallucinatory film made at a time when gialli had pretty much vanished down a creative cul-de-sac.
11 March 2010 at 19:28

James Gracey said…
So true Shaun. I've watched this several times in quick succession over the past week or so. I love it. I'm quite keen to check out some more 'rural' gialli now you mention them - and I also recently watched The Short Night of Glass Dolls for the first time. Pardon my ineloquence, but it was fucking brilliant!! I hope to post a review of it over the weekend. In which I will be more composed. Hopefully :o)
11 March 2010 at 19:33

Richard of DM said…
Nice work, James. Make sure you check out Pupi Avati's Zeder if you haven't already. While vastly different from Laughing Windows, it also has that unmistakable feeling of dread throughout.
12 March 2010 at 13:22

Will Errickson said…
Have to agree; couple years ago I sorta burned myself out on giallos but Laughing Windows stood out starkly as one of the very best. Unexpectedly so, even. Now I need to see it again!
12 March 2010 at 15:19

James Gracey said…
Thanks for the heads up Richard! Will do.

I Like Horror Movies said…
This is the third review I have read on the film within the last 2wks counting the one in The Encyclopedia of Horror, and I have bumped it up to the #1 slot on my Amazon wishlist for my next purchase! Cant wait to see it, thanks for another excellent review James!!
14 March 2010 at 18:09