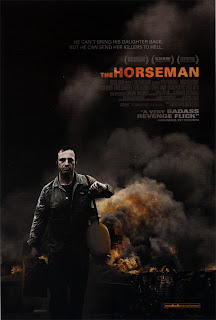 Grieving father Christian (Peter Marshall) tracks down the men responsible for his daughter’s death and discovers more about his daughter than he ever knew. Along the way he picks up teenage hitchhiker Alice (Caroline Marohasy) who is completely unaware of the brutal and bloody revenge he is extracting. Or is she?

The latest in a line of powerful and extreme Australian genre pictures such as Storm Warning, Long Weekend, Wolf Creek and Lake Mungo, The Horseman exudes a stark realism in its depiction of a grieving father turned brutal vigilante. What adds to the effectiveness of the film is that director Steven Kastrissios maintains effective restraint throughout proceedings as he ratchets up the tension to unbearable levels, before letting rip in a barbaric, bloody and highly intense climax.

We've browsed through your reviews and thought that they are really original and interesting! We would like to invite you to publish your reviews on 7tavern.com, which provides an alternative platform for promising movie reviewers to showcase their talents. In addition, you'll find a growing community of bloggers who share the same passion for excellent movies! Based on the merit of your reviews, we intend to offer you exclusive publishing privileges on our website!