Lizard in a Woman’s Skin 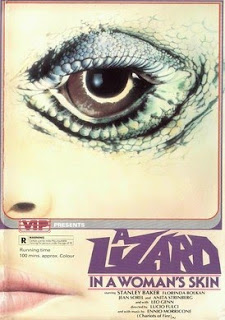 After Dario Argento’s The Bird with the Crystal Plumage proved extremely popular with its heady amalgamation of grindhouse exploitation and art-house chic, European cinemas were soon saturated with provocatively titled gialli featuring animal imagery in the titles. One of the more provocative and visually arresting of these films was director Lucio Fulci’s Lizard in a Woman’s Skin. The opening barrage of eerily sensual imagery produces a heady, hypnotic atmosphere rife with sexual deviancy and decadence. Fulci showcases his obvious talent for creating astounding imagery and arresting shots in these sequences – the various dream scenes really tap into something highly unnerving and the hallucinatory and trippy visuals that the film opens with perfectly capture the tone and mood. As well as being rather exploitative! Carol runs through a crowded corridor full of naked copulating couples before falling through darkness and making love to Julia on a plush bed that seems to float in the midst of the darkness. The savage attack on Julia is shocking and brutally blunt, and as we start to merge back with reality, the scene is lit with an increasingly bright white light that is eventually revealed to be the flash on the coroner’s camera as detectives gather at the murder scene. 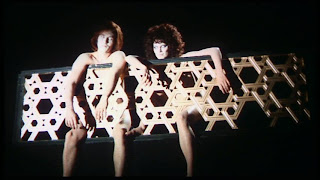 Fulci does what he can to keep viewers guessing about the killer’s identity and Carol’s sanity, and the narrative becomes increasingly twisted and convoluted. We are introduced to all manner of strange and eccentric characters – the detective on the case, Carol’s promiscuous husband (Jean Sorel – Short Night of Glass Dolls), her spunky step-daughter and a couple of LSD dropping hippies who may or may not hold the key to solving the crime. However, because there is no one character that remains the focal point, and none of them are particularly sympathetic anyway, it is hard to care about them. The film is strangely detached. Even our heroine Carol is an unreliable narrator as her innocence is called into question a number of times. This is really a film about atmosphere and intrigue, and Fulci succeeds admirably in creating a creepy and sexually charged malaise that swirls throughout proceedings. 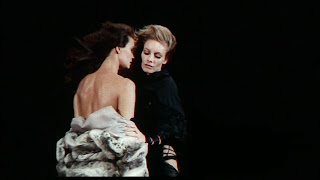 Aside from the opening dream scene, the film’s other standout moment occurs towards the end when Fulci obviously remembers he needs to give his film a thrilling conclusion after seemingly endless scenes of exposition, familial melodramatics and ‘whacked out’ hippies acting strangely. Carol is told by a mysterious caller that if she wants answers, she must meet them at an old church. This is where the film’s already distinct lack of logic takes a further plunge into implausibility, creating a nightmarish and surprisingly taut chase scene. During this sequence, Carol is pursued through the impossibly labyrinthine building by someone in a motorcycle helmet and we follow her down into murky catacombs, through windowless and echoic chambers full of rabid bats, a lab full of still-alive vivisected dogs - complete with pulsating insides-on-the-outside - and a breathtaking chase along the rooftop. The tension produced in this scene is never replicated anywhere else in the film. 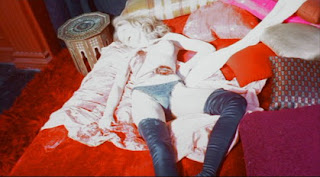 Apparently Fulci landed himself in hot water with animal rights authorities by including the deliberately shocking scene with vivisected dogs. The authorities were so convinced by the special effects they thought the animals were real. Typical of the winding and twisted narratives of gialli, it is just another one of those moments specifically designed to provoke a visceral reaction from the audience – its inclusion bears no relevance to anything else in the film. Elsewhere the gore Fulci would later become famed for is notably restrained, aside from another chilling dream scene in which Carol’s family are all depicted sitting in a row in an attic, holding their own guts and starring white-eyed into space.

This film boasts a shimmering and hallucinogenic score by Ennio Morricone that perfectly enhances the sexually charged proceedings. Equal parts ominous and seductively chic; this is one of Morricone’s most underrated and dazzling scores.

An interesting and visually stunning addition to the Italian gialli of the Seventies. Lizard in a Woman’s Skin proved that when Fulci was on fine form, he could really deliver twisted and delirious movies – this is one of his best works.
Anita Strindberg Florinda Bolkan Giallo Italian Horror Lizard in a Woman's Skin Lucio Fulci Psychological Horror Seventies Horror

Shaun Anderson [The Celluloid Highway] said…
Another great review! - People tend to overlook Fulci's contribution to the giallo, but this film and "Don't Torture a Duckling" are easily up there among his very best films. His other entry "The Psychic" is less impressive, but further proof of Fulci's generic utility. His 70's output is fascinating and includes westerns, sex comedies, childrens adventure, giallo and horror.
15 March 2010 at 00:27

Aaron said…
That's a cool poster... I've never seen that one before. I've only seen this movie once and I'm pretty sure I didn't like it all that much after I saw it, but it's still one that I occasionally find myself thinking about. I'm glad you dug it though. It was very stylish in comparison to Fulci's other films, but what stood out for me was how great Anita Strindberg looked in it! Prior to this I had only seen her in Martino's Your Vice Is A Locked Room... and she looked busted in that one. I didn't even realize it was her in this movie until I looked it up on IMDB later!
15 March 2010 at 09:07

James Gracey said…
It's a beautiful poster, isn't it! I think it is actually the cover of a VHS release.

I have to admit, I'm really not a huge fan of Fulci, I think a lot of his stuff is sub-par and he was such a bandwagon jumper - but I really quite dug this. It was ridiculously stylish and moody and overflowing with eye-catching shots and camera work. And of course being a Seventies giallo, it had its fair share of zoom-tastic moments too.

One of the special features on this disc was a Fulci trailer reel. Undisputed highlight of that was the trailer for MurderRock... Wowzers.

I Like Horror Movies said…
I gotta say I am with Aaron on this one, I dont pretend to understand or enjoy the film. I understand its importance as one of the better Gialli of the time, but I find the plot to be tiresome and I prefer Duckling 100:1 over this one. I wont even bother with a ratio of enjoyment against Argento, since the number is so large that it lacks definition
20 March 2010 at 18:05

James Gracey said…
Cheers Carl!
I think I really need to check out more Fulci - especially Duckling - so many people have praised it recently. The trailer looks cool, though it's no MurderRock! (which I simply MUST see at some point in my life!). ;oD
22 March 2010 at 11:50