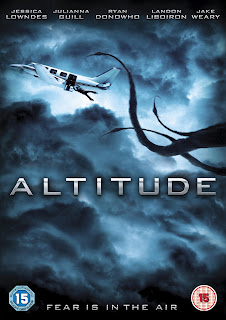 When five friends set off to see Coldplay in concert, rookie pilot Sara offers to fly them there in a rented plane. Shortly into the flight however a mechanical failure results in the plane heading into a steady, unstoppable climb, as a massive storm closes in. As fuel begins to run out and the plane climbs ever higher, emotional tensions within the confines of the small aircraft begin to rise.

But the problems onboard prove to be the least of the friends’ worries. Outside, hidden in the depths of the storm clouds, a mysterious and monstrous force is lurking. Its sole purpose is to destroy the plane and its passengers…

Altitude comes hot on the heels of various other ‘confinement thrillers’ - such as Wind Chill, Frozen and Buried – in which characters are menaced in a confined location and come under threat from each other as much as the ‘thing outside.’ Kudos to the filmmakers, they’ve actually attempted to create something genuinely different and fresh. Altitude is not just a teens-imperilled-by-a-monster movie. Nods aplenty to The Twilight Zone, Weird Tales, HP Lovecraft, Donnie Darko, E.C. Comics, Forbidden Planet, Lifeboat and Sphere, abound. 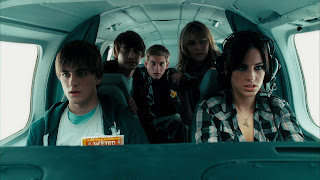 With such an original, intriguing and downright irresistible premise, Altitude is a movie that promises much, but never really delivers on its potential – it may be unique, but it is also an incredibly frustrating film. Despite such a powerful premise and the fact that director Andrews has the ability to mount tension very well, it never really reaches the heart-stopping heights (sorry) that it could. While the plot is certainly character driven, it suffers from a collection of weakly rendered characters we neither care about, nor root for. All are the usual horror stock types and are there to make up the numbers. None are particularly likable, but one in particular – the jock – is one of the most unnecessary and insufferable characters in recent memory. They pretty much ensure from the get-go that engaging with them on any level will be impossible. Bloody Coldplay fans, eh? The fresh-faced cast are a little lightweight to convince us they really fear for their lives. 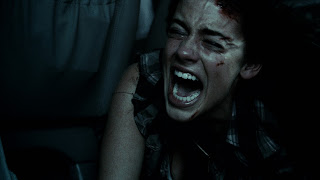 The screenplay by Paul Birkett is constantly trying to surprise us, and keep our attention, with twist after revelation after contrived reveals; uncoiling with seemingly wild abandon and serpentine chutzpah. Throughout the course of the film, every character unburdens a dark secret that adds to the tensions within the plane. After a while this become a little tedious, and when we finally get to the big ‘twist’, it feels like a major let down. Or rather, it would have been a major let down had the journey to it not been so increasingly disappointing to begin with. So much of the drama seems to be padding out the running time while we wait for the monster to show up. Ridiculous conclusions are drawn far too soon – like characters attempting to climb out of the plane to the tail in order to fix the mechanical fuck-up, or deciding that one of them is so much of a menace to the others that he needs to be tied up. Obviously realism isn’t what Altitude is aiming for, but if certain scenes were a little less far-fetched, it might have worked better. Too much time is devoted to ridiculous melodrama and Dawson’s Creek ‘relationship talk.’ 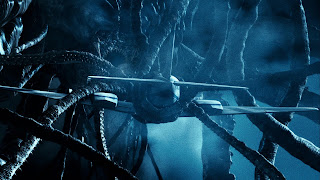 Director Andrews is also an award winning graphic artist – it really shows – and he has a strong visual sense, deftly creating a nightmarish and Lovecraftian atmosphere of doomed dread and hopelessness. The brisk and constant twists and fantasy tinges ensure we never really know where the story will go next, and that anything is possible. As flawed as it is, Altitude is still an entertaining ride and is head and shoulders above most other low-budget horror fare out at the moment.

Christine Hadden said…
Ahh, I see you didn't find this one especially worthy either.

James Gracey said…
I know Cody, I read your review. I felt your pain, especially since you'd been looking forward to it so much! Dimming the lights, pulling the phone out, settling on the couch with popcorn (though it's usually wine with me) and then realising that all that trouble and those expectations were for nothing. NOTHING! Gah! Still, those sky tentacles were pretty neat. :)
16 March 2011 at 11:47

Aylmer said…
I disliked this movie so intensely that I felt like throwing rotten fruit at my TV.
20 March 2011 at 04:09