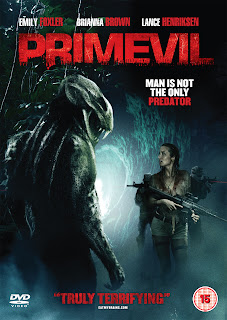 AKA
The Lost Tribe
The Forgotten Ones
After Dusk They Come

When a group of friends onboard a yacht rescue a delirious man from the sea, they find more than they bargained for when he shipwrecks them on an uncharted island during the night. Exploring the jungle the next day, the group discovers a deserted military camp and an abandoned archaeological dig site. But no people. Hearing strange noises and movements in the trees, they soon realize that the island is actually inhabited by a tribe of primitive humanoid creatures, and that they have now become the prey...

This new cut has been retitled The Lost Tribe AKA The Forgotten Ones AKA After Dusk They Come, and was quietly released direct to DVD in various territories.
Now set for release in the UK, the film has been retitled yet again, this time going by the more generic sounding Primevil…

You still there? Come back! 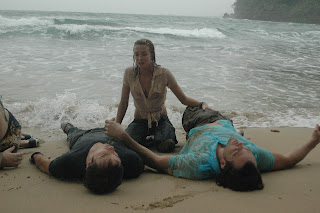 Primevil resembles what would happen if Predator were to shack up on a jungle island with The Descent. It is a strangely old fashioned feeling film that benefits from a strong cast, gorgeous cinematography, rousing score and breathtakingly taut suspense. After a rather uneven opening things finally get going once the yuppie pals are shipwrecked on the island. Reiné slowly cranks the tension and atmosphere to stifling proportions and the story begins to zip along at breakneck speed, as fleetingly glimpsed ‘things’ lurking in the impenetrable jungle swiftly dispatch the group.

The island itself is like another character. It springs to vivid life thanks to a truly unsettling soundtrack of animal noises, insects and barely audible rasped whispers. It is hot, steamy and inhospitable. Reiné is also the director of photography, and though everything is lensed beautifully, he is still careful to capture the inherently sinister qualities of the island. It is not a tropical paradise; it is unwelcoming and alien landmass, which from the outset is portrayed as a strangely ‘off’ place. The more the friends explore, the more the jungle seems to stir around them, omitting inhuman and guttural sound effects, snarls, grunts, growls – and were those words? The initial creepiness soon builds to tightly wound terror and panic as the blood begins to flow and the friends take flight. 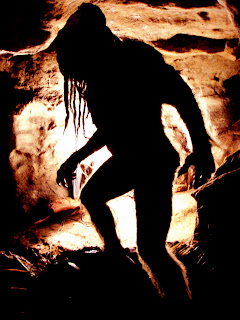 Once we’re left with sole survivor Anna (Emily Foxler), the film really comes into its own; equal parts ludicrous, tense, feverish, nasty and unsettling. When we finally see the humanoid creatures, they don’t disappoint. They resemble a strange mix of the crawlers from The Descent and the formidable bounty hunters of Predator – hulking bat-faced primates sporting dreadlocks and bad tempers. They’re big, imposing and brutal. Some impressive wirework depicts them hurling themselves through the forest at speed in a number of adrenaline-fuelled chase sequences.

The subplot involving Henrikson, in what essentially amounts to a thankless cameo as a renegade priest out to destroy the archaeological findings, is left unexplored and is pretty much discarded before the halfway point. The thought of the Vatican deploying priests to far-flung corners of the earth to destroy evidence of evolution is a tantalizing, albeit fairly ludicrous one.
Action veers between genuinely suspenseful sequences and more out of place ‘emotional’ moments in which the music swells and people say stuff like ‘Save yourself.’ There is a strangely touching and ultimately devastating moment when Anna finds her mortally wounded boyfriend in a cave. Really rather nasty and unnerving SFX - including a disembowelling – adds to the grainy realism and CGI is thankfully not relied on.

Primevil is a pretty decent man vs. nature/monster movie that exploits timeless notions such as fear of the unknown, being stranded in an isolated place, being at the mercy of nature, and encountering long forgotten monstrosities. It riffs on other classics such as Predator (right down to the heat-vision POV shots) and The Descent (right down to aping one scene pretty much shot for shot) which can be a little distracting – check out that DVD cover! 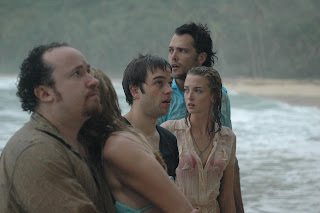 While it may have had a troubled production, a plethora of titles, an uneven first act with slightly confused storytelling and overlooked/abandoned sub-plots, Primevil still emerges as a surprisingly effective and oddly enjoyable old-fashioned horror thriller that has the integrity/audacity to take itself seriously.