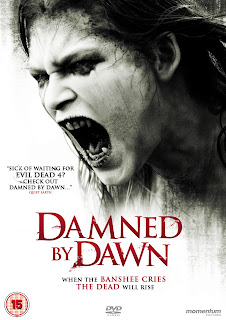 Prompted by the arrival of a mysterious package from her terminally ill grandmother, Claire drags her reluctant new boyfriend off to meet her family at their remote country home where she hopes she will discover the motivations behind the unexpected gift. Things go well until Claire’s grandmother begins rambling on about a female spirit she is expecting to come in the night to escort her body into the afterlife.
That night, as a violent thunderstorm rocks the house, the family is awoken by a succession of piercing, otherworldly shrieks, which prove to be the cries of a banshee. As the terrifying sounds ring out, the dead are summoned to rise again, so beginning a waking nightmare for Claire and her family as the banshee and her army of the undead unleash their fury upon the living.

The figure of the banshee in traditional Irish folklore is a tragic, sorrowful one. She was said to appear wailing mournfully near the house of someone who was soon to die. Many cultures have their own banshee-like figures, even places like Mexico, where she is referred to as La Llorona (The Crying Woman) and holds a significant position in the folklore there. Throughout the years though, representations of the banshee in cinema, particularly horror cinema, where she appears most often, portray her as an evil entity; the very sight of whom will cost a person their life. This is perhaps tied in to the notion that anyone who saw or heard a wailing banshee would shortly thereafter pass away. She is traditionally a harbinger of doom and death. She has made numerous appearances in horror films throughout the years, though for this writer, the most memorable and unsettling was in the Disney flick Darby O’Gill and the Little People… *shivers* 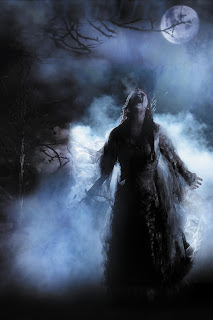 Damned by Dawn, the debut feature by writer-director Brett Anstey, relocates the legend of the banshee to Australia, and places her as the figurehead of an ancient Oirish family curse. A huge crowd-pleaser at the Film4 FrightFest in 2010, the film has been drawing favourable comparisons with Undead, and has even been dubbed Evil Dead IV.

For a film with such a low budget it manages to be creative, inventive, atmospheric and about as entertaining as independent horror movies get. From the moody and eerily unsettling opening shots of dank mists enshrouding a creepy forest – complete with spooky narration about banshees, death and family curses – Anstey impregnates the film with style and buckets of atmosphere. Unfortunately, as events unravel the constant use of cheap CGI bog down proceedings and undo much of the carefully wrought atmosphere and tension. With a fantastic concept though, the film still succeeds in spinning a fairly gripping yarn. Once the story kicks in, and believe me, it takes its sweet time in doing so, Damned by Dawn plays out as a taut siege movie with an abundance of striking shots featuring floating wraiths, flying skeletons, gaping wounds and creepy-crawlies. It’s easy to see why the film has been called Evil Dead IV – some of the camerawork in scenes where characters are running around the moonlit, fog-strangled forest is breathtaking and more than a little Raimi-esque.

The characters are all fairly likable, though a little underdeveloped – all except for heroine Claire (Renee Willner) of course - and the performances are rudimentary.
Once our doe-eyed couple reach their destination and granny starts spouting creepy jargon about death and evil spirits of the dead, before being dragged off into the surrounding forest, Anstey builds tension carefully as the banshee and her fleet of flying skeletons offs the cast one by one. 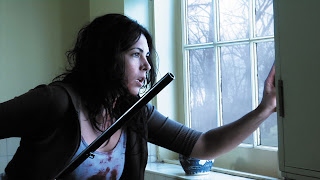 As mentioned however, the film does suffer from its reliance on cheap CGI – it is most effective when it deploys the use of prosthetics and practical effects, and Anstey proves he has a keen sense for creating visually arresting moments. Things begin subtly enough with only fleeting glimpses of a shrouded figure floating through the forest in the dreams of various characters. The arrival of the banshee during the thunderstorm is heralded by what initially sounds like a ferocious draught blowing through the crack of a window in an empty room in an isolated house – it is a moment charged with haunting power. Unfortunately from here, Damned by Dawn goes all out to be as unsubtle as it can possibly be, with the sinister shriek eventually beginning to grate and the creepy menace replaced by continuous shots of CGI ghosts, cockroaches and screaming, bloody-eyed banshees.

The tone of the film seems unsure of itself too, at times. Too hokey to be truly scary, and a little too skewed and disturbing in a slightly off-kilter way to be really funny, it falls somewhere between and just can’t quite seem to hit its potential mark. That said, it’s an enjoyable and arresting treat for gorehounds favouring stylish oddities. 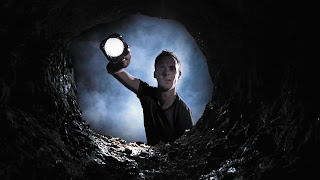 A.D. said…
So I shouldn't go out of my way to see it? I noticed this a couple of weeks ago and thought about renting it, but reading the EVIL DEAD comparisons on the DVD front/back cover was kinda of a turn off. After reading your review, it sounds like something I'd rather not see. Great write-up, though!
5 March 2011 at 13:00

James Gracey said…
It's enjoyable enough, Aaron. I was very excited about watching it because of the Evil Dead comparisons, and I'm actually keen to check it out again. I dug it, but thought it was spoiled by over-using not very good CGI. Damn CGI! Spoils so many indie horrors. Quite a few of the striking shots are still imprinted on the back of my eyes this afternoon from watching it last night.
5 March 2011 at 13:06