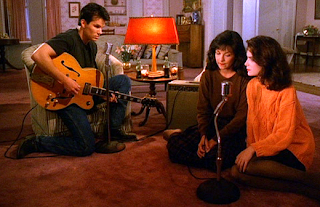 James, Donna and Maddy gather in Donna’s living room to sing a song. The three are united in their grief over their friend Laura Palmer’s death. Donna realises that James is falling for Maddy, Laura’s cousin, who also bears an uncanny resemblance to Laura. After the song, Donna leaves abruptly and James chases after her. Left alone in the living room, Maddy – who seems to share the same susceptible nature that Laura, and indeed several of the other townsfolk exhibited, and just seems able to sense when something is 'wrong' – feels a dark, creepy presence in the house. Suddenly she sees ‘Bob’ a filthy, lecherous man Laura wrote about in her diary, claiming he abused her and would eventually kill her, slowly appear in the room. He quietly skulks towards her from the other side of the room and we see it all from her point of view as she sits rooted to the spot with fear.

The sight of this dirty, carnal beast-man slowly advancing towards us and crawling over the couch with warped, slightly unreal looking movements (like so many of the series’ ‘dream moments’ or ‘visions’, this scene was also filmed backwards to create an off-kilter feel) is overwhelmingly creepy. His presence does not belong in the house – he has invaded a clean and supposedly safe and cosy domestic space – which makes the scene all the more effective. The others rush back into the room when they hear her screams of terror... 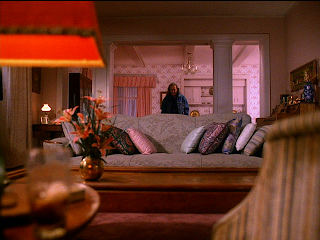 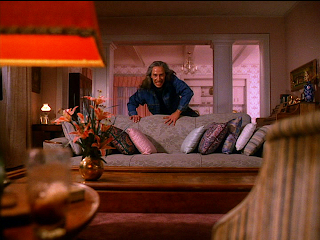 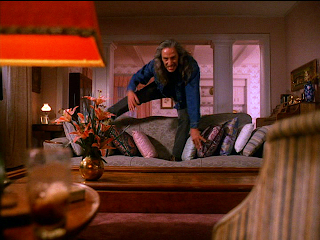 Twin Peaks was a series that was practically sopping in an eerie, melancholy atmosphere sprinkled with absurd humour and hefty sexual underpinnings. The central theme was the exploration of the seedy underbelly of a small, seemingly mundane town on the US/Canadian border and the murder investigation of highschool girl Laura Palmer. Each week delved deeper into the darkness that lurks just beneath the surface of small town Americana. This town was anything but mundane.

Jenn said…
I've been a HUGE Twin Peaks fan for a long time; in fact, I wrote a paper in grad school about the feminist underpinnings in the series. I can find feminist subtext in just about anything.

Glad to see someone blogging about Twin Peaks. We need more of it in this here blog-o-verse.

The owls are NOT what they seem...

Christine Hadden said…
Wow, and you like Twin Peaks too? If I weren't already married we'd be picking out china patterns. LOL.

Twin Peaks was one messed up, glorious show!
I got the Definitive Gold Box DVD a few years back, it's been great rediscovering why it was so damn crazy.
30 January 2010 at 15:54

James Gracey said…
Whilst at uni I became the biggest David Lynch geek imaginable. I was most likely a raging cliche, but fuck it. I love Twin Peaks, and any opportunity that presents itself to rewatch it, is snapped up without a second thought... I actually picked up a copy of Fire Walk With Me today on VHS, just because it was £1...

As for china patterns Chris, I'm quite partial to those Willow Blue and White... ;o)

Jay Watson said…
James, thanks for the cool post. I never watched the show when it ran on the network, but last year I was able to watch the whole thing (plus the movie) on DVD. I'm a huge fan also. Absurdist humor, great (if quirky) acting, beautiful scenery, and twisted off-kilter science-fiction/mystery/horror plotting. This show was genius. Thanks again for the post James.
30 January 2010 at 19:07

mge said…
Lynch is great when it comes to horror. Those small dosis of fear are so intense they're hard to forget. I had to cover my face several times while watching Twin Peaks, and that's not usual for me, not even when I watch horror movies in the cinema.
30 January 2010 at 19:45

James Gracey said…
It really pleases me that so many people seem to share such fond memories of this show. I loved it - though I was only 10 when it was first broadcast - I watched it in the summer of 2001 when it ran on Sci-Fi on Friday nights. I was hooked for that whole summer... Good times. I watched Fire Walk With Me before the series - though it didn't spoil my enjoyment and I also read the Secret Diary of Laura Palmer after the series. Twin Peaks was a fantastic universe to immerse one's self in!
30 January 2010 at 20:12

Matthew Coniam said…
Great to see this getting so much praise - there was a lot of flak at the time but I was really into it - more remarkably I rewatched it recently (albeit only as far as the episode where Leland dies) and I was so impressed at how good it still was, and how pervasive that lush, eerie, melancholy, Edward Hopper-meets-Argento kind of atmosphere Lynch creates remained. Blue Velvet still great, too. I am almost always disappointed when I revisit a teenage passion, so this was revelatory for me. Liked the film, too: saw it three times in one week at the Odeon, Tottenham Court Road, first year of university.
Great stuff. Hope you're well and good, James. I'm off to open a bottle of red and watch some Lugosi now!
Best,
Matthew
31 January 2010 at 18:23

James Gracey said…
Edward Hopper-meets-Argento - I love that.
I'm trying to pursuade my flatmate that it would be a good idea to start watching Twin Peaks again. Nothing too heavy, just an episode or two a night... I'd love to rewatch it from start to finsih again, its been a few years since i've done that. I adore Fire Walk With Me. Alas, I've never seen it in a cinema.
Bottle of red and Lugosi, eh? Its like I'm looking in a mirror!
Hope you are well. ;o)
31 January 2010 at 18:53

Christine Hadden said…
As an afterthought, one cannot discuss Twin Peaks without a shout out to Angelo Badalamenti - without his dark brooding score it just wouldn't have been the same. (None of Lynch's work would have been...)
Great stuff.
1 February 2010 at 04:33

James Gracey said…
So true Chris! Every time I hear those opening cords of the theme music I get goosebumps. And the soundtrack to Fire Walk With Me has to be one of the most evocative soundtracks of all time. EVA!
1 February 2010 at 10:42

The Vicar of VHS said…
Lynch has the unique ability to make ANYTHING creepy. I swear, he could film a 5-minute static shot of a sunlit front yard with birds singing and people waving to each other as they walk by and somehow make it the most ominous thing ever.

James Gracey said…
I whole heartedly concur Vicar! Another case in point is the opening of Lost Highway - surely some of the creepiest moments from his work. And the old couple in the back seat of the car laughing maniacally in Mulholland Drive... I could go on...

And regular Twin Peaks rewatchings are a fine way to spend your evenings.
2 February 2010 at 14:29