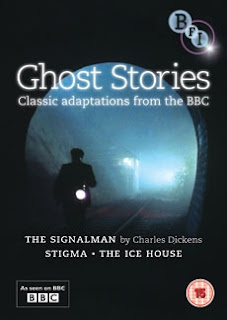 The removal of an ancient menhir from a family’s back garden unleashes a blood curse upon an unwitting woman.

This was the seventh and last instalment of A Ghost Story for Christmas to be directed by Gordon Clare, and the first to feature an original story – not an MR James adaptation – in a then contemporary setting. Written specially for television by Clive Exton, Stigma is much more graphic than any of the other Ghost Story for Christmas films and features a bleak and doomful tone that, while perfectly in keeping with the sombre tone of the earlier James adaptations, also echoes Exton’s prior work such as Doomwatch (1972) and Survivors (1975–1977).

That the horror plays out within the cosy home of a middle class family enhances the impact. Like all good horror stories it features very ordinary people, mundane even, caught up in an incomprehensibly extraordinary situation. The blending of the ancient (the standing stones) with the then contemporary (the family and their plans for a new lawn) is a striking one. Unlike the other Ghost Story for Christmas films, this one does not feature a stuffy male protagonist ensconced in research and academia, but a modern, middleclass woman at the centre of the haunting. The question of whether or not the nasty haunting is psychological or not, isn’t left unanswered for long. Katherine’s body begins to bleed uncontrollably, though she exhibits no wounds. As the bleeding continues and worsens, her sense of desperation and terror is effectively conveyed by actress Kate Binchy. We see her in private moments as she undresses in the bathroom, frantically trying to find the source of the blood. The nudity is presented in a matter of fact way, heightening not only tension, but the vulnerability of the helpless protagonist. This is body-horror at its most primal and terrifying. 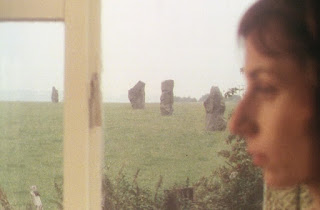 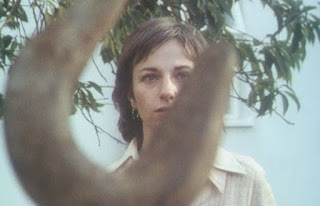 It’s almost impossible not to view Stigma as an effective Female Gothic piece commenting on the persecution of women throughout the ages. Domestic horror abounds as we see Katherine going about her daily chores and preparing dinner while gradually realising that something is very wrong with her body. Katherine's daughter Verity witnesses her bleeding uncontrollably, a fate that will soon befall the girl when she comes of age and inherits the 'curse' of bleeding, passed from one woman to to the next. Katherine’s body and the wounds wrought upon it appear to mirror what may have happened to the woman whose remains are discovered beneath the menhir. Much later, when Verity has painted her nails bright red and suggestively toys with an onion (in folklore onions were used as relics to prevent evil spirits and demons from invading the home, much like garlic is used to repel vampires) she appears much more sure of herself, as though she is absorbing the strength and life that is bleeding out of her mother, and her interactions with the young man who was called in to remove the menhir, have gone beyond mere flirtation. 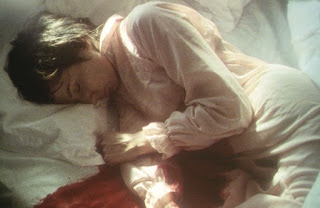 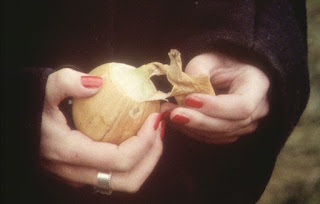 The family’s decision to have the giant stone removed from their garden decries the destruction of ancient sites by the onset of modernisation. The use of standing stones - and the way they appear to encroach upon the lives of the characters - and the haunting, potentially lethal arcane secrets they retain, echoes similar titles such as The Stone Tape (1972), Children of the Stones (a BBC TV series broadcast in the same year as Stigma) and The Owl Service (1969), an Arther Machen-esque tale set in the Welsh countryside and detailing a bloody history repeating itself. Their presence also harks back to the opening of Jacques Tourneur's masterful adaptation of MR James' Casting the Runes, Night of the Demon (1957).

Stigma may have been criticised at the time for moving away from the typical James adaptations, but that it still retains the ability to unsettle is testament to its quiet power. While it may not chill the blood as much as, say, Whistle and I’ll Come to You, it still gets under the skin with its unnerving story, hopeless tone and relatable characters.
A Ghost Story for Christmas BBC BFI Folklore Kate Binchy Lawrence Gordon Clark Made For TV Paganism Seventies Horror Stigma

James Gracey said…
Hope you guys get a chance to see these films at some stage. Multi-regional DVD player mayhaps? I'll be posting reviews of the other titles soon...
22 June 2013 at 09:58

Daniel said…
Stigma is a creepy, disturbing masterpiece. Not MR James, but included in A ghost story for Christmas.