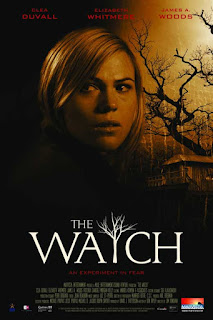 In a bid to finish her thesis, psych student Cassie accepts a job at an isolated fire watch tower. The solitude and stress of finishing her thesis – on post-traumatic stress, no less – take their toll on poor Cassie, who begins to suspect the area may be haunted… Could she be suffering from a nervous breakdown? Or is she really being targeted by a tragic spectre? Or, is something equally sinister but much less supernatural afoot? So many possibilities.

As mentioned in the previous review, I enjoy catching random horror films on late night TV. If said random horror flick features Clea Duvall, even better. Boasting a rather similar story to Deadline, The Watch also tells of a troubled young woman attempting to get her life back on track after a traumatic incident in her past. What better way to do that than head out into the middle of fucking nowhere to finish your thesis on childhood psychology and have a few ghostly encounters that push you to the brink of your sanity while you’re there? While it has a much lower budget than Deadline, The Watch is a much more effective spookfest. With a well-rounded, well written character to anchor the story – and a typically understated performance from Duvall – The Watch is an intriguing little made for TV thriller with a few surprises to offer.

As it was made for TV, it is all fairly tame stuff, but – as demonstrated by Val Lewton in the 1940s, less is more - there are a couple of subtly creepy, atmospheric moments, and the setting itself is highly effective, aptly conveying just how remote and cut off Cassie is. Rather beautiful by day, with stunning views over an autumnal forest valley, by night, when the wind howls and shrieks through the draughty cabin, it becomes somewhere only a horror film fan would want to stay. The use of sound really enhances the eerie atmosphere. Verging on dilapidated, the cabin creaks and moans as much as the ancient trees surrounding it, and when the sun goes down, the wind moaning through the cracks and the sudden bursts of static from the radio serve to make it a highly unnerving place indeed. Cassie’s interaction with a couple of other characters detracts a little from the doomful solitude and loneliness she’s supposed to be experiencing, but Clea Duvall is so convincing this can be forgiven, and the hushed moments concerning a water-pump and a moved chair are quietly chilling. 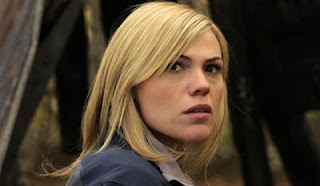 Via radio, Cassie strikes up a friendship with another young woman in a lookout cabin across the valley. Of course, we know this other woman is a ghost as soon as she says her name is Polly. As we're such vigilant viewers, we remember that the name Polly was carved into the wall of the food locker and is glimpsed scrawled inside the books Cassie reads. Spooky. The way in which Polly's spectral nature is suggested is still quite subtle though. A lonely ghost who simply wants a companion – but doesn’t take rejection well – she has an interesting back-story. While her penchant for ripping the last pages out of books is a little twee (she does so because she’s a ghost and her story has no ending, yada, yada, yada, and she’s doomed to go on and on without ever finding peace or resolution) when she finally reveals herself, it’s also obvious she’s a fan of J-Horror.

When the denouement comes and all is revealed (shades of Clive Barker’s Dread and, believe it or not, Sliver abound), the matter-of-fact and surprisingly lo-fi manner in which it’s all handled may leave some viewers feeling a little let down; it’s all very ‘oh, I see. Okay then.’ Someone is even scolded. As a character study and rumination on the effects of isolation though, The Watch is pretty solid. While some of the reveals may seem far fetched, as a statement on the cold, callous nature of mankind, it’s as dark as a made for TV thriller can be.

If you happen to catch it on TV late at night like I did, it’s worth checking out.
Clea Duvall Ghost Story Made For TV Psychological Thriller The Watch

Marie Robinson said…
Holy fuck I did not recognize Clea Duvall with blonde hair. To me she will always be the girl from "But I'm a Cheerleader". Please tell me you have seen!
Lovely review, as always.
22 June 2013 at 15:04

psynno said…
Nice review James. I want to check this one out now. Had a similar experience watching The Pact. Genuinely scary and intelligent although clearly derived from a short film idea. I feel that these directors put a lot of their own lives and fears into these first films... Hope all is well.
25 June 2013 at 23:45

James Gracey said…
I have indeed seen Cheerleader, Marie - it has a cool John Waters vibe to it. Clea Duvall is one of my favourite actresses. Have you seen The Faculty? It's a lot of fun and has a really cool cast - one of the first films I saw her in.

Paul I reckon I enjoyed this so much because I just stumbled upon it on TV. There were no expectations. I haven't seen The Pact - is that the film that came out last year with the tagline 'Are you alone in your house?' Mayhaps I will check it out - I hated the poster and the trailer, it seemed really bombastic and reliant on CGI. Thanks for the recommendation, I'm now curious to see it. :)
29 June 2013 at 09:58

psynno said…
Maybe that's a different film you saw the trailer for. It's about a woman whose sister disappears in their mum's old house. There's a spooky webcam scene. Secret doorways and parallel universes etc. See what you think anyway it caught me unawares like The Watch did for you.
30 June 2013 at 15:24