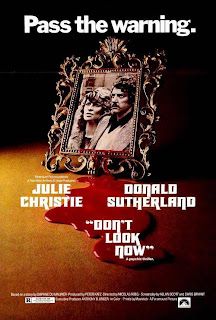 Based on the short story of the same name by Daphne du Maurier, Don’t Look Now is from a collection of stories revolving around the intrusion of the supernatural/paranormal upon the lives of everyday, normal people. Released on a double bill with The Wicker Man – whose protagonist’s death is, in hindsight, also very much pre-conceived - Don’t Look Now ripples forth as a devastating and often terrifying study of grief. When their young daughter drowns in a pond in the family garden, John and Laura (Donald Sutherland and Julie Christie), attempt to come to terms with their loss and reconcile their relationship by travelling to Venice. John throws himself into his work and denies the possibility that their daughter could be trying to communicate with them from the afterlife. After befriending a spooky psychic and her sister, Laura opens herself up to the possibility that their daughter is trying to reach out to them from beyond the grave. But why? Ghost-like, the couple drift apart in the labyrinthine limbo of Venice, their family unit as shattered as the narrative is to become – with the city’s watery foundations serving as a constant reminder of their daughter’s fate.

While it reflects upon themes such as predestination, misinterpretation, fate, and cause and effect, the primary focus of Don’t Look Now – aside from unsettling the audience in the most subtle way imaginable - is the fragmenting psychology of the couple. The audience follows them as their relationship frays and unravels through a visually resplendent and rich narrative full of recurring themes and motifs, of which the colour red becomes increasingly significant, coming to the fore as a harbinger of something devastating yet to happen. Their daughter wore a red raincoat when she drowned; someone in a red hooded coat flits through the shadows of Venice by night. The mist enshrouded, labyrinthine streets of Venice are a character in their own right. A cold, damp, deteriorating city full of crumbling beauty and rife with moral corruption; its very foundations are submerged in water, highlighting the collapse of John and Laura’s relationship. Roeg films the city in such a way as to highlight its bewitching, eerie atmosphere. He films it through the eyes of a stranger, capturing a lesser seen Venice; damp, decaying and pregnant with menace. ‘Venice in Peril’ signs can be glimpsed in the background of various shots, and the blind clairvoyant who befriends Laura remarks: “Venice is like a city in aspic. My sister hates it. She says it's like after a dinner party, and all the guests are dead and gone. Too many shadows” – serving to heighten the city’s likeness to a Necropolis. Indeed, the character of Inspector Longhi also comments: “The skill of police artists is to make the living appear dead”, reiterating the film’s preoccupation with death. The mounting sense of dread and unavoidable doom that is slowly and beautifully evoked literally seeps throughout.


We learn that a serial killer stalks the streets after dark and, while their exploits aren't the focus of the narrative, the story is haunted by their presence - police are spotted dusting for fingerprints and John’s panic when he believes his wife is missing, serve as reminders of the grisly goings-on. It becomes apparent that the paths of this mysterious killer and the couple will eventually cross. We see bodies being dragged from the murky water; indeed water takes on a completely sinister quality in Don’t Look Now. Usually associated with birth, cleansing and purification, here, in the form of Venice’s dank canals, it conceals corpses, corruption and death. 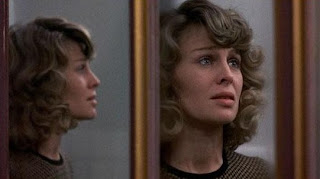 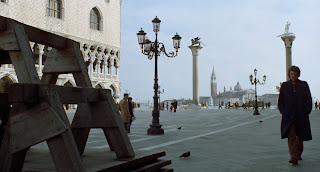 The way in which Don’t Look Now is edited, works to actively disorientate the viewer and further compliment the themes of precognition. With the various flash-forwards and flashbacks John experiences throughout the narrative, proceedings are lent a fragmented feel – this is a film that rewards with every viewing. Time and space are disordered, at one stage Roeg even gives us a glimpse of the book Laura is reading – “Beyond the Fragile Geometry of Space” – and as events unfurl, time, space and reality are shown to be connected in ways that are not always immediately apparent. A few times throughout, John admits to a feeling of Déjà vu, unaware of the true implications of these experiences. He is lost, suspended in time. Venice itself seems to exist in a place ‘beyond space’ where people get lost, wander around, double back on themselves, stumble across places that ‘seem familiar’ before they end up right back where they began. The scene where John and Laura are attempting to find their way back to the hotel after dinner and are wandering along dark alleys, creepy canal-ways full of echoes and threats, really exploits the city’s maze-like structure. It’s a brooding limbo constructed of menacing spaces and one which renders the grieving couple ‘strangers in a strange land.’

The opening scene, depicting Christine’s death, features seamlessly synchronous and associative inter-cuts throughout, scattering visual clues to events that have not yet happened. We’re fed images but are not always sure of what they mean or what order they've been seen in. The film opens with rain falling on a pond, hinting at the dark events that will flow throughout the rest of the film, instantly establishing the predilection with cause and effect, fate and predestination. Flashbacks, memories and premonitions pepper the narrative, creating an effect akin to gradually piecing together the parts of a scattered jigsaw puzzle. 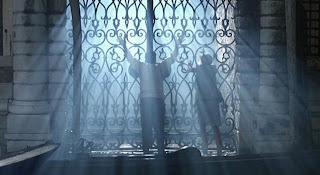 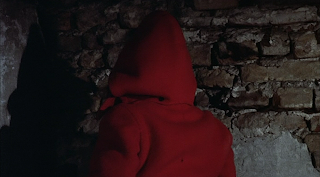 With its focus on a middle aged couple and their attempts to rebuild their lives after the death of their daughter – Don’t Look Now is not your typical horror film. With compelling performances from Sutherland and Christie, and Roeg’s arresting direction and editing, the story builds slowly, and at times utterly chillingly, to a bloody, shocking and poignant denouement that ranks as one of the most hauntingly powerful in all of horror cinema.
Adaptation Daphne du Maurier Don't Look Now Donald Sutherland Dysfunctional Family Haunting Julie Christie Nicholas Roeg Psychological Horror Serial Killer Seventies Horror Venice