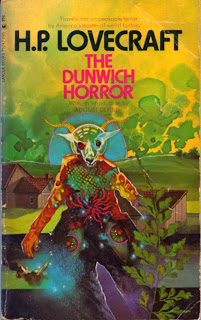 He locked away the Necronomicon with a shudder of disgust, but the room still reeked with an unholy and unidentifiable stench. 'As a foulness shall ye know them,' he quoted. Yes - the odour was the same as that which had sickened him at the Whateley farmhouse less than three years before. He thought of Wilbur, goatish and ominous, once again, and laughed mockingly at the village rumours of his parentage.

'Inbreeding?' Armitage muttered half-aloud to himself. 'Great God, what simpletons! Show them Arthur Machen's Great God Pan and they'll think it a common Dunwich scandal! But what thing - what cursed shapeless influence on or off this three-dimensional earth - was Wilbur Whateley's father? Born on Candlemas - nine months after May Eve of 1912, when the talk about the queer earth noises reached clear to Arkham - what walked on the mountains that May night? What Roodmas horror fastened itself on the world in half-human flesh and blood?'

Despite his enduring and rather formidable legacy, cinematic adaptations of the work of HP Lovecraft are not exactly rife, and his macabre stories of madness and monsters have been notoriously difficult to translate to the screen. Daniel Haller’s adaptation of The Dunwich Horror (1970) is a visually trippy and psychedelic retelling of Lovecraft’s queasy tale of Wilbur Whateley, a deformed half-wit born of man and alien deity who attempts to summon forth the Old Ones; ancient entities slumbering in another dimension, waiting until the stars are right so they can return to earth. Enhancing the weirdness of Haller’s film is a beautifully orchestrated score courtesy of Les Baxter, pioneer-extraordinaire of exotica and Theremin-heavy space-age pop.