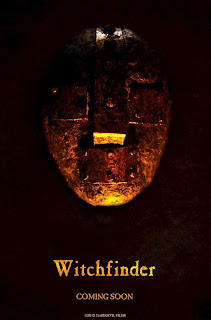 When a love-struck man ventures into the foreboding forest that surrounds his village to seek the dubious help of a witch, their forbidden ritual is interrupted by witch hunter William Thatcher Blake. After sentencing the unfortunate pair to death for fraternising with the Dark Lord, Blake is cursed by the witch, and when he returns home, soon realises the full extent of her dark powers…

Colin Clarke’s short film unveils itself as an atmospheric love letter to vintage Gothic horror. Witches, ancient rites, dark woods and violent revenge are swirled together in a cinematic cauldron that expertly conjures the spectres of bygone horror. With a distinctly old fashioned feel, there are nods to the likes of vintage Hammer, Michael Reeve’s Witchfinder General and the gloomy dread and sadism of classic Italian Gothic horror. One moment in particular - the scene depicting the unfortunate witch’s grisly demise - pays beautiful homage to Mario Bava's Black Sunday/Mask of Satan; right down to the shadow-play on a mask lined with spikes as it advances towards the fragile flesh of the woman’s face.

With a simple story, basic plot structure and a running time of just under twenty minutes, there’s very little messing around, as Clarke soon cuts to the chase, establishing a spooky atmosphere and creepy imagery, some of which echoes that seen recently in Rob Zombie’s Lords of Salem. Clarke’s witch-infested tale is a much more subtle affair though; for one, he knows when to use silence to his advantage. The complete absence of music in one later scene is tremendously effective, as Blake hastily leaves his house and stumbles through the dark with only the creaking of his lantern and the moaning wind present on the soundtrack. Val Lewton would be proud. The discovery of a wide open door after something goes bump in the night is also well staged, and when the witch finally reappears, it’s a haunting sight. 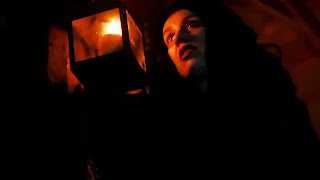 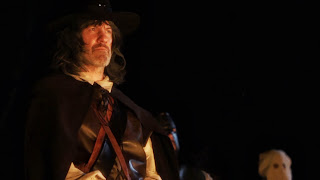 Clarke and co prove that nightmares don’t need a big budget in order to be woven around our beds effectively enough to take root in our heads; just technical skill, creative vision and passion and respect for the subject matter. With heaps of atmosphere - ably enhanced by a moody score courtesy of Brandon Lutmer and Mark Gustafson - grim tone, and spine-chilling denouement, Witchfinder is a well made short that casts all the right dark spells.
Colin Clarke Daredevil Films Ghost Story Revenge Short Film Witchcraft Witchfinder

Warden Stokely said…
Bats! Not that I have anything against rats. Actually, I do have an aversion to animals whose teeth don't stop growing. My two most dreaded words..."COMING SOON." NOT SOON ENOUGH! THAT'S WHAT I SAY! ug. Just how can I view this little gem, James? So up my alley..that dark alley, I dig on so. Stopped Behind the Couch to see whatcha had posted, James, and to let you know I put a link to your MOST AWESOME BOOK over at Warden Stokely's. I enjoyed every page. And if I haven't said it before, I want to redecorate my little apartment in red and blue while watching Suspiria and listening to Goblin REALLY LOUD! Kudos on such a fine informative read! If I didn't realize how little I know before, I certainly do now, and I have you to thank James! As always, Until next time...Keep those fires stoked!
Eternally Yours
ps I will be sure to get my Nosferatu post up this weekend, so your book isn't sitting in the Sunshine! Like I said somewhere else, I'll eventually work up a Full Moon Award, for my friends who have an aversion to daylight.

Warden Stokely said…
Hi James!
"Denouement" I love that word. And considering what we're all trying to do, it's a wonder I haven't read it on a blog before. I've always said you folks in Europe get a better education than we do here in the states. But that's worthy of a post all it's own, and probably would bore those looking for thrills and chills.
Witches? Hammer? Black Sunday? Effective silence? All in 20 minutes? That's simply just too much to ask for. Hopefully, it'll start a trend, allowing us to watch more films! I love witches. I'm still trying to figure out what movie it was I saw when I was 6, 7, or 8, where in which the witch was crushed with the plank, as the puritans added rock after rock after rock. It rocked! haha. I'm sure I was a witch in another life, and may still be, I just forgot how to practice. I want to watch this. How can I make it happen, James? Until next time...Keep on stokin' those fires, Mr. Gracey. I seriously love hiding behind the couch.
Eternally Yours

James Gracey said…
I really hope you can figure out the name of that film! It's intriguing me now, too. And no amount of googling 'witch', 'plank', 'stones' etc has unearthed any info.

If you would like to check out/review Witchfinder, I reckon the best thing to do is head here - http://www.daredevilfilms.net/ - and drop the director, Colin, an email. He'll link you up. It'll be worth it.
8 December 2013 at 00:39

James Gracey said…
PS I'm so glad you enjoyed the book! Let me know when you're painting your pad, I'll bring a bottle of something red and help out. ;)
8 December 2013 at 00:42

Warden Stokely said…
Tomorrow. jk. lol. Oh gosh, that's funny. Definitely will let you know. Would definitely have to get something to drink, cause my landlord would have a friggin' cow. lol. BUT my house is red and blue in my dreams! I'm actually off tomorrow. I'm going to hit up Colin! I'm so excited! I accomplished most of what I needed to today, so I'll treat myself to a little daredevil. Yes, that movie, is the bane of my existence. I expect you'll figure it out the day after I die! :)I will have a clue though, as soon as I see the movie on my 50 Horror Classics that has opening credits similar to the mystery movie. I think it may have been done by the production company. I just can't remember which one it is, but since I'm going through all of them, I'll hit it. It was three letters that started with an A. I just can't remember the other two! Time for bed, James. Night.
8 December 2013 at 06:45