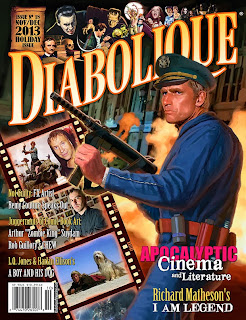 Issue 18 of Diabolique is now available to order. Throughout its pages we take a look at horror’s unparalleled ability to provide a window onto the myriad ills of contemporary society. With a political climate marked by division and pre and post-2012 fears about the apocalypse, as well as the sheer amount of underground and mainstream filmic and literary offerings about the End Times currently available, it would seem that the concept of the end of the world is resonating with audiences like never before.

We wrestle with these themes and their depictions in everything from The Omega Man to 28 Days Later to The World’s End and everything in between, featuring interviews with acclaimed author David Moody; comic book artist/illustrator Arthur “Zombie King” Suydam (Army of Darkness, Marvel Zombies, The Walking Dead); Chew co-creator/illustrator Rob Guillory; criminally charged FX artist Remy Couture; and Before Dawn co-writer/co-stars Dominic Brunt and Joanne Mitchell.

This issue also contains my own consideration of the writings of the late, great Richard Matheson, and the three cinematic adaptations of his post-apocalyptic classic, I Am Legend. Below is a sneak peek…

Here’s to the end of the world as we know it. Head over to Diabolique’s online lair to pick up a copy of issue 18, before it’s too late. 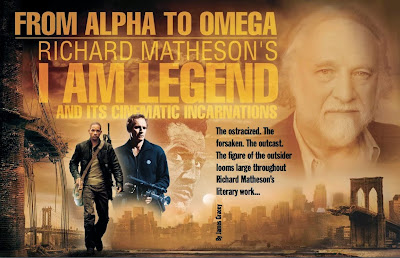 Warden Stokely said…
I have never entered a lair. I've always wanted to! You're not kidding about the Post-Apocalyptic frenzy on hand. Our Teen Librarian can hardly keep up with the multiplicity of the genre, and the teens are eating it up as fast as she can put them out. Maybe they are stockpiling in preparation. Goodness knows, one would want some good reading material! Hey, speaking of good reading material! Diabolque.....!Seriously going to forward her your post......Until next time, James :0
13 November 2013 at 05:26

James Gracey said…
Tee hee. I remember being a teenager. It certainly felt like I was stockpiling for an impending apocalypse most of the time. Hope she enjoys Diabolique - and thank you so much for spreading the word. :)
18 November 2013 at 19:41