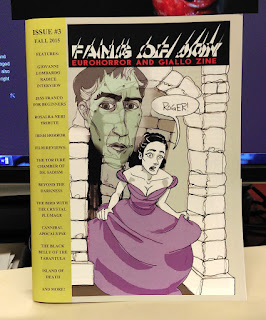 Fang of Joy is an independently published zine that focuses on European horror and gialli. The brainchild of the insanely prolific Richard Schmidt (Hello, This is the Doomed Show; Cinema Somnambulist; Doomed Moviethon), it’s a labour of love that should appeal to admirers of European horror cinema. From Argento, Bava, Naschy and Ossorio, all the way to Laugier, Bustillo et Maury and Wheatley; if you like your horror with a European flavour, this is a zine for you.

Issue 3 contains articles, reviews and features on the likes of The Bird with the Crystal Plumage, Beyond the Darkness, The Black Belly of the Tarantula and The Torture Chamber of Dr. Sadism. There’s also an interview with Giovanni Lombardo Radice (Stage Fright, City of the Living Dead), an introductory guide to the films of Jess Franco, my own humble contribution - an essay on Irish horror cinema - and much, much more.

Pick up a copy here.

Also, if you’re the sort of person who just can’t get enough of Italian gialli (understandable), Mr. Schmidt has just published a book on the subject, which can be obtained here.
European Horror Fan Zine Fang of Joy Horror Magazine Independent Publishing Publishing