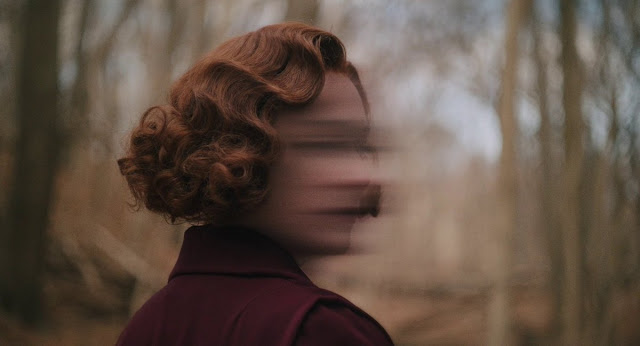 When Rose Nemser's (Odessa Young) husband attains a teaching assistant position at Bennington College, Vermont, the couple are invited to stay with Professor Stanley Hyman (Michael Stuhlbarg) and his wife, the infamous mystery and horror author Shirley Jackson (Elizabeth Moss), whose most recent short story 'The Lottery' is causing quite a stir. Before long, tensions mount within the house and Shirley begins work on a new novel about a missing girl...
Adapted by screenwriter Sarah Gubbins from Susan Scarf Merrell’s 2014 novel of the same name, Shirley is an unusual biopic that sidesteps the conventions of the form as it is more inspired by Jackson’s work than her actual life. Merrell’s novel, equal parts dark literary thriller and enthralling love letter to Shirley Jackson and her haunting body of work, is a fictionalised account of a period in Jackson’s life. Like the novel, this adaptation takes as much artistic licence as it perfectly evokes the atmosphere of Jackson’s own work, with its scenes of domesticity undercut with an uneasy air of dread and paranoia. Tension springs from the most mundane, domestic sources, which makes it all the more striking: the telephone ringing unanswered at night, a mistimed culinary compliment, Shirley finding Rose reading a draft of her novel, the arrival of a party invitation.
With their husbands away on campus every day, Shirley and Rose are left at home. While Rose reluctantly busies herself with housework, Shirley begins work on her new novel. She sees something kindred within Rose, which leads her to begin chipping away at the young woman in order to understand the literary character she is creating. They see something of themselves in each other and they begin to influence each other’s lives as much as they shape the character in Shirley’s novel. This duality extends to the male characters, as Fred begins extramarital affairs on campus, mirroring the philandering Stanley. Lines demarking reality and fantasy, fact and fiction become blurred and shadowy as the women feed off each other, and a sense of tragic inevitability begins to manifest, ghost-like. 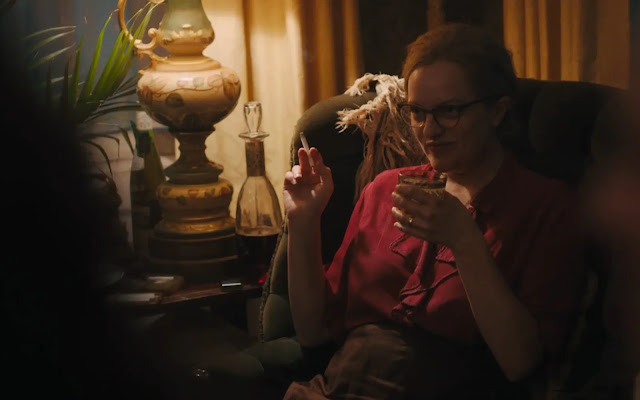 Director Josephine Decker combines the sensory with the sensual to conjure a heady, haunting atmosphere rife with psychological and sexual tension. Much of the film unfolds with the Jackson-Hyman house, the exterior of which is smothered by a vast creeping ivy which threatens to shut out all traces of sunlight. The interior is a cosy clutter of books, bric-a-brac, academic manuscripts, floral wallpaper, ornamental lamps dimly glowing in shadowy corners, and general homey chaos, which all stands in sharp juxtaposition with the dark mind-games and fracturing psychologies of the characters.
The house is as busy and cluttered as Shirley’s mind, and it eventually begins to overwhelm, conveying how stifled a life Shirley lives. Many of Jackson’s own novels and stories would feature imposing houses with gloomy, unknowable interiors which mirrored the troubled, fragmented minds of her female characters, who, much like herself, were marginalised and oppressed by social conventions and gender-based expectations. Like the Jackson-Hyman house in the film, the homes in her stories speak of the confinement of this fiercely intellectual woman, relegated as she was to the socially dictated role of housewife and mother. Rose begins to understand this all too well, as she finds she is expected to put her own plans on hold to support her husband’s career.
While it deviates from Merrell's novel, which drew (its fictionalised version of) Jackson in a much more sympathetic light, it’s still a beguiling work that toys with the myths surrounding the author. As Shirley Jackson, Moss delivers a powerful performance, ably portraying the inner struggles of a complex woman rebelling against restrictive social conventions. She is by turns captivating, acerbic, terrifying, witchy and tragic. Like one of Jackson's many doomed characters, she is marginalised (she lives with depression, is a borderline alcoholic and suffers from agoraphobia) and like a phantom, confined to walk the halls of the house (Deckard evokes this perfectly in the shot of Shirley staring out of a window almost obscured by the creeping ivy), hemmed in by unrealistic and unreasonable societal expectations (a faculty wife blames Shirley for Stanley’s infidelities, accusingly hissing ‘I would have kept him interested’) until she rages like a poltergeist. Gubbins's screenplay paints Shirley as a woman who has cultivated a formidable reputation which she uses to guard her vulnerability, and she deliberately provokes people to demonstrate intellectual superiority as much as to keep them at a safe distance. 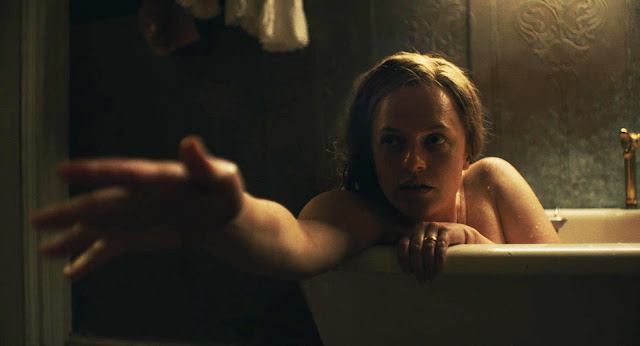 The editing creates a sense of disorientation which perfectly mirrors the internal conflicts of the characters, particularly as the story moves into the final act (which draws heavily from Jackson’s 1951 novel Hangsaman) when the lines between reality and imagination appear most unstable. The score, courtesy of Tamar-kali, mesmerises and unnerves with its layers of shrieking strings and discordant piano, heightening tension and adding to the disquieting, feverishly Gothic malaise.
Shirley is as haunting and ambiguous as any of Jackson’s own stories, and a fitting tribute to the author of some of Gothic literature’s most unsettling and darkly psychological work.
Adaptation Biopic Female Gothic Gothic Feminism Gothic Horror Gothic Literature Shirley Jackson 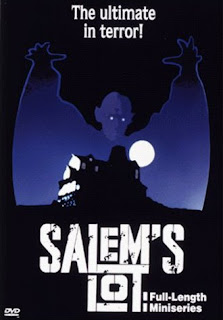