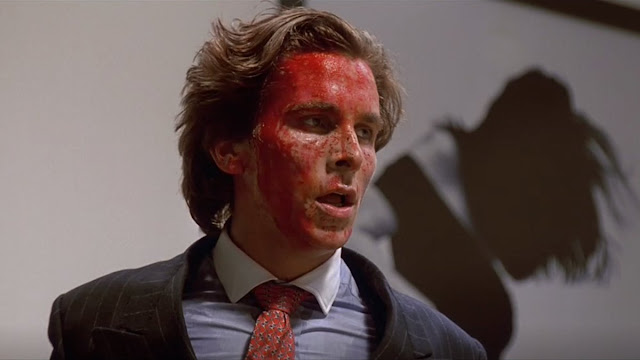 On the surface, handsome investment banker Patrick Bateman (Christian Bale) appears to have it all. Behind the façade of his immaculately groomed and besuited physique, however, lurks a narcissistic psychopath with an increasingly uncontrollable bloodlust. Directed and co-written by Mary Harron and based upon the controversial 1991 novel by Bret Easton Ellis, American Psycho is a dark, satirical examination of the heartless, capitalist excess of 1980s America. Harron, who co-wrote the screenplay with Guinevere Turner, opts to tone down the intense violence of the novel and up the satire, as they focus attention on ridiculing the Wall Street executive lifestyle, social conformity, toxic masculinity and the mindless consumerism of the time. Harron’s cool, detached direction not only ensures the seemingly disparate elements of horror, comedy and satire effortlessly blend, but allows the excess of the period to speak for itself. Violence, when it occurs, is either offscreen or shocking enough to render it absurd.
Throughout, the audience are privy to Bateman’s crazed internal monologue, which is not only darkly humorous, but reveals just how manufactured his identity is and, disturbingly, how little the people in his life actually know him. He presents to the world what he thinks it wants to see. He is incredibly handsome, well-groomed and charming. He openly admits that beyond all of this, there is simply nothing else there. His murderous rampages are driven by greed and jealously, maybe even boredom – he confesses that when he’s inflicting pain it’s the only time he actually feels anything. Harron and Turner don’t offer any comforting explanations though. As the plot progresses, he becomes an increasingly unreliable narrator (and Bale’s pompous, zany performance is delivered with ever-manic aplomb) as events blur together in a frenzied swell and the real horror emerges from the utter pointlessness and absurdity of his psychotic rampages. 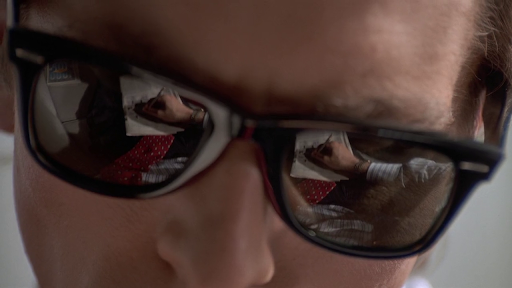 The screenplay is peppered with a catalogue of Bateman’s extraneous critiques of everything from the latest hit records and fashion styles, to restaurants and haute cuisine, as well as descriptions of his daily skincare and fitness regimen. Banality is humorously glorified, and conformity fetishized, most notably in the scenes where Bateman and his colleagues compare their business cards, poring over wording, font, colour and paper thickness with increasingly difficult to hide envy. From all this absurdity, Bateman emerges as a sort of anti-hero in a grotesque comedy of manners. His fiancée Evelyn (Reese Witherspoon) asks him why he stays in a job he hates, and he replies ‘Because I want to fit in’. Characters are sometimes introduced as people other than themselves, and everyone argues over the identities of others they see in restaurants or bars, everyone is too self-involved to pay attention to anyone or anything else. All the male characters are identikit suit-clad Wall Street investment bankers. They’re all aggressive and testosterone-driven, sport the same slicked back hair and douchey demeanour, and all are ensconced in petty rivalries. A running joke is that Bateman is constantly mistaken for his colleague Paul Allen (Jared Leto).
In this stiflingly insular world in which the characters manoeuvre, despite their wealth, they’re all petty, miserable, and prisoners of conformity. The only characters to evoke any sympathy are Bateman’s receptionist Jean (Chloe Sevigny), his drug-addled lover Courtney (Samantha Mathis) and ‘Christie’ (Cara Seymour), a dispirited prostitute he hires and whose real name we never find out.
While Ellis’s novel was frequently described as ‘unfilmable’, Harron’s adaptation is not only a chilling examination of the soullessness and viciousness of Reagan-era America, but a tautly wound exploration of human depravity. One of the most shocking elements of the film is how acerbically funny it is. A cult masterpiece.
Adaptation Mary Harron Satire Serial Killer Social Commentary