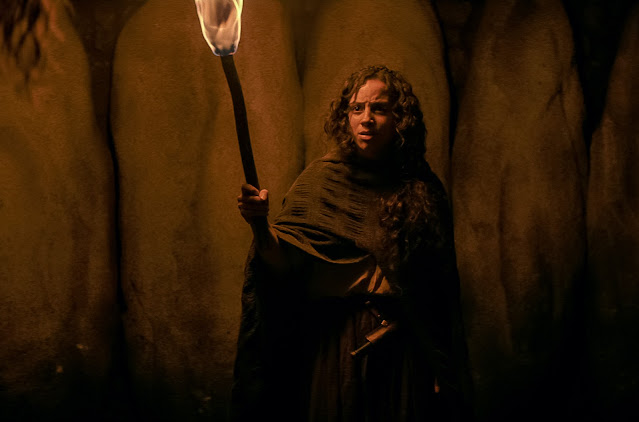 When Deena (Kiana Madeira) and Josh (Benjamin Flores Jr.) reunite the severed hand and skeletal remains of the witch Sarah Fier in an attempt save Deena’s ex-girlfriend Sam (Olivia Scott Welch), Deena experiences a vision which reveals the origins of the curse that has plagued her town for centuries.
After introducing audiences to the doomed residents of the cursed town of Shadyside (Part 1) and exploring fragments of the town’s grisly curse in more detail (Part 2), director Leigh Janiak and her co-writers Phil Graziadei and Kate Trefry, now take a deep dive into the origins of the curse, flashing back to 1666 and introducing us to the alleged instigator, the witch Sarah Fier. As with the previous films, viewers can expect twists and revelations – and, finally, some answers – regarding the dark history of Shadyside. Many of the actors from the previous two films return to portray characters from the town’s past, direct ancestors of the characters they previously played. Rather akin to Ginger Snaps Back: The Beginning (2004), this helps the audience to immediately identify with characters as well as establish a strong sense of ancestry. This duality bolsters the overarching themes of the trilogy regarding (Queer) identity, class, and generational conflict. The exploration of the rivalry between Shadyside and Sunnyvale reveals tragedy, injustice, and violent intolerance…

At the heart of Part 3 is a Queer love story and a powerful commentary on the persecution of women and minority groups, specifically the LGBT+ community. A vicious witch hunt is set in motion when Sarah (Madeira and Elizabeth Scopel) falls for her neighbour Hannah (Scott Welch), the preacher’s daughter. Their relationship is regarded as unnatural and unholy by their puritan community. Before long, they are accused of witchcraft and fraternising with the Devil. The film is at its most powerful when it highlights the thread of persecution of those seen as ‘different’ by a fearful and ignorant society, from the past all the way to present day, where there are still places in the world where being gay is punishable by death. Tension mounts as grave injustices are inflicted upon the two young women, and there’s a hefty emotional wallop when the fate of Sarah Fier is finally, achingly revealed, and we come to understand why her anger continues to enshroud the town from all those centuries ago. Of course, there are several more twists and revelations when the story races ahead to the 90s again, and Deena and co must race against time in a climactic bid for survival. And justice.
The Fear Street trilogy has been an immensely entertaining and thrilling ghost train-ride, and Part 3 offers a fitting and wholly appropriate finale. Throughout the thrills and chills and bloodshed, Janiak has centred the characters, giving audiences relatable and sympathetic figures to root for. The overall story arc segues seamlessly between films, consistently building to a very crowd-pleasing climax while enriching the mythology. That the series centres around a Queer love story is also remarkable. And meaningful. LGBT+ representation in mainstream horror is still relegated to the periphery. Sure, there might be gay characters in certain titles, but often their inclusion feels tokenistic. Here, we have a story that not only features gay characters but centres them. Their love for each other is what motivates the action at the heart of proceedings (Deena is trying to save Sam, who was possessed by Sarah Fier) and offers them hope of a happy ending.
Adaptation Leigh Janiak LGBT+ Prequel Sequel Slasher Supernatural Horror Trilogy Witchcraft