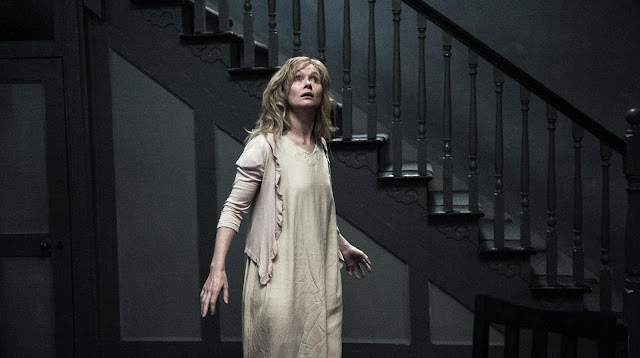 Written and directed by Jennifer Kent, and based upon her earlier short film Monster (2005), The Babadook is a creepy, powerful meditation on grief and the effects of trauma. It tells of Amelia (Essie Davis), a woman struggling to come to terms with the tragic death of her husband, and whose young son begins to behave erratically, claiming a monster is hiding in their house. Kent utilises a striking expressionistic style throughout to convey the inner turmoil and fear of the characters, and explore themes concerning loss, grief, and motherhood. Her direction is careful, unhurried, and her pacing deliberate, all of which allows the audience to be slowly, surely submerged in the gradually increasing horror.
Tensions are already high when Samuel (Noah Wiseman) asks Amelia to read him a mysterious pop-up storybook she has never seen before. The book tells of a weird creature called Mister Babadook, who torments anyone who discovers his existence. The children’s book, and the dark power it seems to hold over Amelia and Samuel, lends the film a sort of fairy tale quality, tapping into the same primal horror present in so many classic children’s fairy tales: fear of the dark, and of abandonment, fears of helplessness, of being hurt and neglected by loved ones. The loss of innocence. When Amelia destroys the book, it reappears, and things start to go bump in the night…
As the story largely takes place in a single location – Amelia and Samuel’s suburban home – and as Amelia gradually shuns the outside world, things begin to feel very claustrophobic. Home eventually becomes a threatening space – initially cosy interiors are swallowed by long dark shadows, filled with darkened corners and doorways leading to blackness. Like the sets in old German expressionist films (think Nosferatu [1922], The Cabinet of Dr Caligari [1920]), the production design and cinematography convey an externalisation of the inner emotions and psychologies of the characters. Deep shadows, exaggerated lighting, and strange camera angles provide a heightened sense of reality, calling to mind the work of Mario Bava. The look of the titular creature, certainly what little we glimpse of it, was influenced by Lon Chaney's 'The Man in the Beaver Hat' from the lost film, London After Midnight (1927). Supremely creepy stuff. Kent’s deft conjuring of ambiguity within the story makes us question whether or not a supernatural presence actually haunts the house. The horror at the heart of the story springs from the increasingly intense and fraught relationship between mother and son, driven by her grief and guilt, and his difficult behaviour borne of confusion. 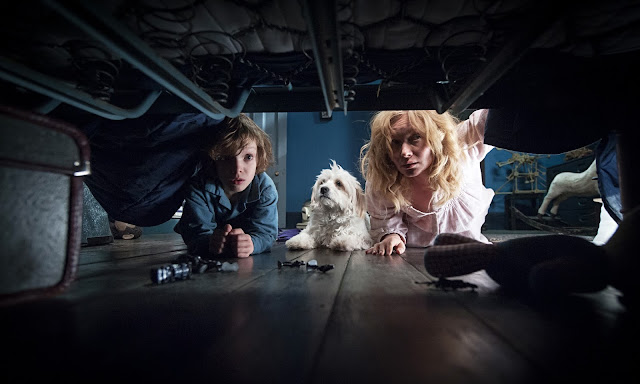 Amelia eventually realises that she must face a certain darkness within herself, the dark things her grief and anger could drive her to do. Mother and son project their feelings onto one another, difficult, overwhelming feelings that aren’t easy to articulate – the scenes in which Amelia has dreams or hallucinations in which she murders her son are especially disturbing. She struggles to reconcile the coinciding death of her husband/birth of her son. The film is incredibly intense, particularly when Amelia becomes a physical threat to her son and the horror emerges from the all-consuming grief and the dark places where this pushes her. Davis delivers an incredible performance. The titular monster, whom Kent mainly relegates to the shadows and peripheries of the screen, eventually emerges as a manifestation of grief, guilt, regret and anger. Amelia has tried to ignore it for too long, so when it materialises, she can no longer control it. It takes over, possessing her. She eventually learns that she cannot completely free herself of it, but she can learn to live with it, to acknowledge it, but not let it take over. This is beautifully conveyed in the closing scene.
The Babadook is a masterpiece, plain and simple. Kent’s strong direction, astute screenplay and focus on characterisation, atmosphere, performances and the power of suggestion, all pool together to create an immensely powerful, absolutely terrifying and heart-breaking work.
Australian Horror Haunting Metaphor Psychological Horror