Hellebore: Writings and essays devoted to British folk horror & the themes that inspire it 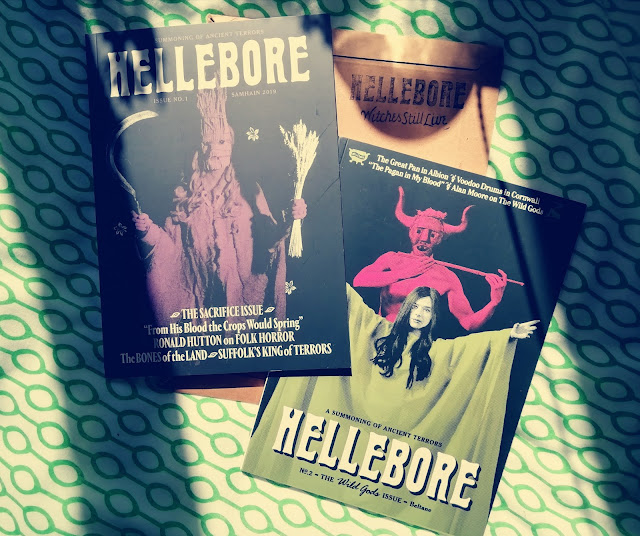 The small press magazine Hellebore is a collection of writings and essays devoted to British folk horror and the themes that inspire it: folklore, myth, history, archaeology, psychogeography, witches, and the occult. The publication takes its name from a poisonous plant strongly associated with witches and the water element – it is also said to have the power to alter perception and open portals to the Underworld and the subconscious. Founder and editor Maria J Pérez Cuervo’s fascination with archaeology, mythology, anthropology and magic stems back to her childhood, and led her to study Latin and Ancient Greek at school before embarking upon a MA in Archaeology for Screen Media. Her writing regularly appears in publications such as Fortean Times, Spirits of Place, The Ghastling, Rituals and Declarations, and Folklore Thursday. According to Maria, she decided to create Hellebore because “The idea of creating something that included all the themes I love was very appealing. Because we consume so much online content, printed books and magazines feel like a small luxury. This is why I wanted to create a physical object, something to savour. These are my favourite themes, and there was nothing quite like it around, so I decided to give it a try. It seems to have resonated with many people, and I’m very grateful that I can continue to do it.”
There have, thus far, been five issues of Hellebore, each featuring content inspired by a specific folk-horror theme. From human sacrifice, megalithic monuments and ancient pagan cults (Issue 1: Sacrifice), ritualism, the cult of Pan, Cornish voodoo and sex magick (Issue 2: The Wild Gods) and curses, hexes and witchcraft (Issue 3: Malefice), to storytelling, death and rebirth (Issue 4: Yuletide) and past traumas and forgotten histories (Issue 5: Unearthing), each issue offers an in-depth exploration of the myriad strands and themes that embody folk horror. Having been drawn to the themes and ideas that inspire folk horror since she was a child, Maria’s own favourite is “the ritual murder of the sacred king, which I’m certain comes from my love for Mary Renault’s The King Must Die, a book about the Greek myth of Theseus and the Labyrinth that was very much influenced by James Frazer and that I discovered in my formative years. There would be no folk horror without James Frazer and Margaret Murray. Folk horror really is a creation of the Victorians and their ideas of cultural evolutionism and pagan survivals. It is very much about the weight of the past, but in a more archetypical, primal way than the gothic (which I also love). When I reference the themes that inspire folk horror I’m very much referring to these things that obsessed me as a little girl and that still do now.” 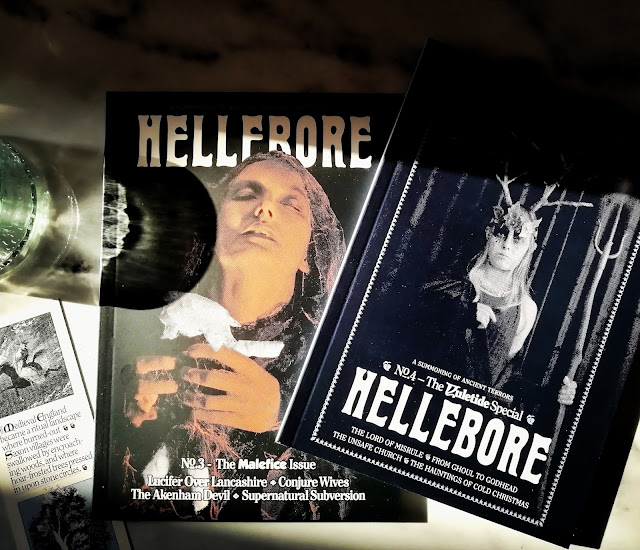 When it comes to deciding which themes to craft each issue around, Maria reveals “When I first conceived Hellebore I had a pretty good idea of what I wanted to include. On my initial list of concepts to explore I already had Sacrifice, Malefice, and Summoning (the latter will be our sixth issue, out in October 2021), as well as some others that I can’t reveal yet, but that will hopefully appear at some point in the future. The Samhain issue is by nature darker than the Beltane one, so I’ve come to think of each theme as either a Samhain one or a Beltane one, and this is also reflected in the design.”
Printed on silk coated, A5 paper, Hellebore’s rich content is emboldened by its visually sublime, gorgeous design work. From the striking colour palettes and the typefaces to the illustrations, artwork and layout, every issue is a luscious, visual treat. According to Maria, “In my initial brief for Nathaniel Winter-Hébert, the art director, I referenced Czech and Polish film posters from the 60s and 70s, Victorian and Edwardian publications, a bit of psychedelia and surrealism, and the grainy finish and DIY spirit of old school zines. This, essentially, is the Hellebore aesthetic, with a more polished, modern look. We keep a secret Pinterest board where we store all our references, but every issue is different, and the aesthetic differences are dictated by the theme. We talk about the concept, and then decide on the colour palette and other details. Nathaniel introduces a guest typeface in each issue. For Malefice, he used one reminiscent of barbed wire to reflect the theme of harming; and for Unearthing, one that was bottom heavy, to embody the weight of the past. Many other details are inspired by the content, and Nathaniel always includes some Easter eggs that people may not be aware of—for example, the rune thrown into the cauldron on the back cover is different in each issue.” 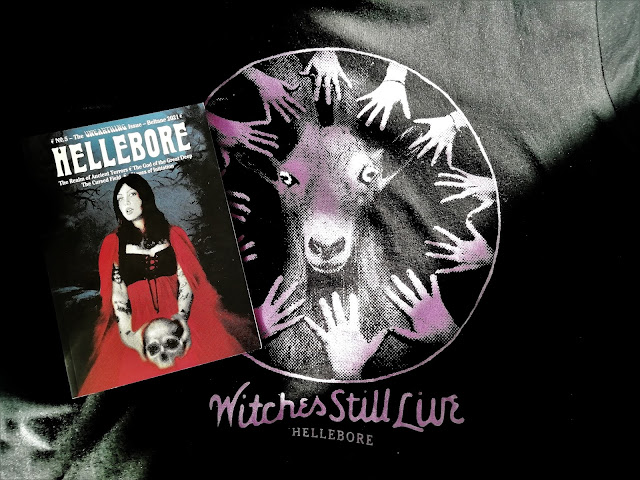