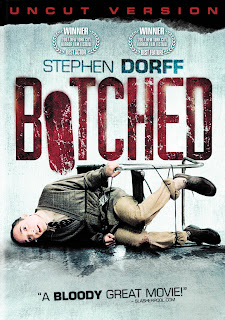 Botched is a rather fitting title for a film that seemingly revels in its own brand of absolute anarchy. Largely shot in Ireland and Eastern Europe, it boasts an eclectic cast of credible character actors who lick up their absurd characters with perverse relish. And Stephen Dorff. But a Stephen Dorff on top form.

Beginning as something of a slick heist-caper complete with Ocean’s Eleven style car chases, jewellery-thieving, a groovy David Holmes-like soundtrack and talk of ‘one last job.’ However in a film called Botched, as its name may just suggest, you know that there is going to be some serious fuck-upedness and all will not go as planned. Sure enough, Richie (Dorff) is shipped off to Russia by his sadistic boss (Sean Pertwee) to retrieve a jewel-encrusted cross from a swish Moscow penthouse to compensate for messing up the last heist.

However, events soon bleed into something else entirely ala From Dusk til Dawn. That ‘something else entirely’ is an incredibly gory slapstick film. Splat-stick, if you will. While the ‘one last job’ goes wrong, as predicted in the title, what comes after is as shocking and ludicrous as some of the images it revels in, such as that fridge full of innards, a booby-trap featuring disco music and a glitter-ball (!!) and some of the most over-the-top performances ever committed to celluloid. Oh, and a VERY fake looking rat. 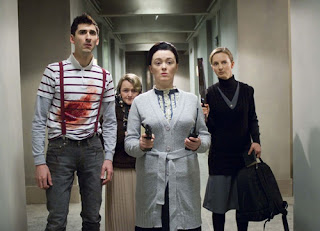 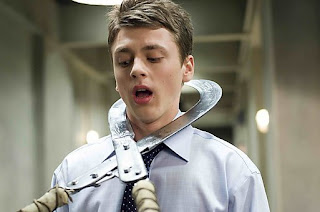 Along with his somewhat unhinged accomplices Peter (Jamie Foreman) and Yuri (Russell Smith), an assortment of weird and quite possibly insane hostages, Richie becomes trapped on the mysterious thirteenth floor of the building. Richie you see, through no fault of his own this time, manages to ‘botch’ this heist too. While figuring out a plan, the three crooks lock up their newly acquired hostages and the viewer is allowed a few moments to become acquainted with them. At this stage the film is shaping up to become a slasher movie essentially. And we all know that characters in slasher movies are mere ‘types’, drawn with the faintest of strokes so we can tell them apart before they are bumped off. There are also three women led by Sonya (Bronagh Gallagher), who don’t really say much except that they should pray and until later, we don’t really know why they are there. None really stand out that much aside from the perversely entertaining Bronagh Gallagher, who seems to be the only one who has nailed the irreverent tone of the film.

Needless to say, lunacy ensues and the group are soon picked off one by unsubtle one by an absolute bonkers villain called Hugo (Alan Smyth), who may or may not be Ivan the Terrible. Or a direct descendent from Ivan the Terrible. Or something. There were many things that distracted me throughout, like, I don’t know, the sheer audacity of it all, so I’m still not entirely sure what was going on sometimes. The sight of Hugo decked out in what looks like Viking garb and then prancing around waving his sword to Bach is unfathomably ludicrous and a wee bit shocking. You’d be more than forgiven for crying a little bit inside on witnessing this spectacle. 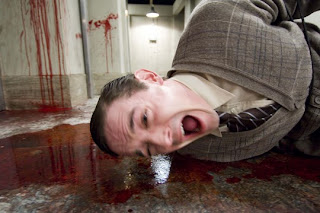 Dorff seems to be the only person involved taking things seriously (bless), but this suits his character and helps the film remain more grounded than it could have otherwise been. He portrays Ritchie with as much world weary resignation as the viewers of this film will have upon watching it. And when he says ‘this is getting out of hand’ one can’t help but wonder if he’s still speaking in character.

Despite its flaws, Botched is never boring. Viewers may well be shocked and befuddled by its sheer absurdity though and spend a lot of time either yawning or with their jaw on the floor exclaiming ‘I just can’t believe it.’ Its lack of seriousness makes the ever so slightly similar Severance look like Deliverance. Obviously relishing its low budget and grotesque humour, Botched is many things. But for now all I’ll say is that it is insanely goofy and gory. Beware.