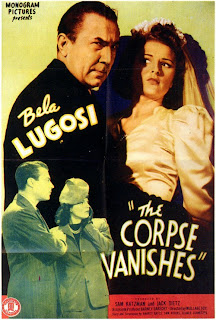 The Corpse Vanishes has the honour of being one of many poverty row B-Movie productions that Lugosi was relegated to star in by the mid 40’s. It is however a good deal more adept than most of the other lamentable flicks the ailing actor worked on before disappearing into Ed Wood-produced purgatory.

The ‘story’ follows reporter Patricia Hunter (Luana Walters) as she tries to discover who is murdering and abducting brides on their wedding day. It doesn’t take a genius to figure out that Lugosi is the culprit: stealing the bodies of young brides to extract vital glandular fluids from them to keep his ailing wife (Elizabeth Russell) youthful. Lugosi is of course aided in his diabolical quest by a sadistic dwarf and a hulking giant: freakish sons of Lugosi’s housekeeper. Naturally.

The film begs no pardons for its exploitative subject matter – it relishes in the sensationalism of it and its shock value goes blatantly for the jugular every chance it gets. ‘Its sensational! Another kidnapping of a dead bride – what a story!’ scream the newspaper headlines that spin across the screen imposed over shots of a busy printing press. After the bizarre opening shots of Lugosi in the back of a Herse, grinning maniacally and greedily pulling a body into the back with him, these sexy headlines bring us up to speed. At this stage, with the exception of Lugosi’s creepy appearance, the film resembles a screwball comedy more than a morbid thriller. The music accompanying the opening montage also suggests we are about to watch a rip roaring yarn. 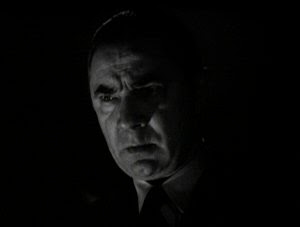 Luana Walters gives proceedings a well needed shot of adrenaline and she is extremely likable as the intrepid reporter, longing to get out of the society column and into real news. She wants to prove her capability and worth to her sexist, chauvinistic employers. ‘Oh sweetie-pie you wouldn’t know a clue if it bit you.’ Will she prove herself to everyone? You bet she will!

An unusually restrained Lugosi provides yet another reliable ‘mad scientist’ caricature as the eccentric Dr Lorenz. In case you don’t get how eccentric he and his wife are, dashing Dr Foster (the excellently named Tris Coffin) is at hand to point out the couple’s weirdness. Apparently being eccentric means playing the organ and staring into space, and sleeping in coffins too! They are so kooky! Our perceptive reporter soon discovers that each of the brides was given a mysterious orchid corsage moments before falling down dead at the alter. Her suspicions are further aroused when she realises it has a peculiar smell. She decides to bring the orchid to a local botanist – who just so happens to be the eccentric Dr Lorenz! 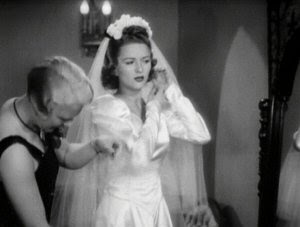 When she and Dr Foster, who is new to town and treating Countess Lorenz for her bizarre ailment, are stranded by a convenient storm, they must stay as guests in the spooky house. Uh oh.
A creepy, if somewhat clichéd, encounter between Pat and the imposing Countess ensues. She sneaks into our beloved reporter’s room and coos over her, exclaiming how young and pretty she is and how pure her skin is. When Pat tries to flee from the room she realises she is locked in and the Countess has vanished.
She does what anyone in her situation would do. Goes to bed.

An effectively shot scene follows, beginning with shadows spilling across the bedroom walls and the hulking giant leering over the sleeping Pat. When she realises that someone is in her room she wakes up and screams, but before switching on the lamp or getting out of bed, she puts on her dressing robe. After much creeping around and finding the corpses of the missing brides, Patricia arrives at the conclusion that Lugosi’s Bathory-like wife needs fluids from young women to retain youth and beauty. But who is going to believe this crazy story? When she tries to tell Dr Foster of her ghastly discovery she utters what most surely be the best line in the film: ‘I’ve been up all night with dead people.’

The Corpse Vanishes rambles along at a fairly brisk pace and though creaky in places, it does manage a modicum of suspense in a few scenes set in the ghoulish mansion. A few shudders are also generated by the sadly underdeveloped monstrous ‘family’ who work for Lorenz and lurk in the dark shadows of the mansion. While far from a masterpiece, the film is infinitely better than many of its poverty row peers.
Bela Lugosi Elizabeth Russell Horror Film Luana Walters Poverty Row The Corpse Vanishes Wallace Fox