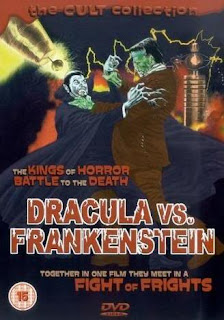 Long before there was Freddy vs Jason, and even when Alien vs Predator was but a twinkle in Paul Anderson’s eye, movie goers had to endure the undoubtedly incompetent but utterly sublime Dracula vs Frankenstein.
Beginning its celluloid life as a follow up to shlock meister extrordinaire Al Adamson’s Satan’s Sadists, Dracula vs Frankenstein was intended to be a biker movie, hence the somewhat baffling presence of Russ Tamblyn as a random mean and moody biker - ‘I need myself a new chick today.’
Somewhere along the way though, most likely to appease lofty execs, Dracula and Frankenstein’s Monster were added to the already bungling mix in a desperate attempt to spice things up a bit. And what an attempt! An utterly tripe fight scene to justify the exploitable and eye-catching title was tacked onto the end for added ‘value’. Everything is just thrown together and makes no sense at all.

The film contains some of the most mind-blowingly daft dialogue ever uttered in the history of cinema, beautifully illustrated in the scene where Dracula appears in a guys car. Naturally the guy just keeps driving and simply asks Dracula who he is. The Count replies ‘I am the Count of Darkness, the Lord of the Manor of Carpathia. Turn here.’ Naturally. And when one character philosophises with another – ‘True. All illusions look real or they wouldn't be illusions, would they?’ And who could forget the detective who mused ‘It seems living hear the water brings out the best and the worst in us.’

The basic story follows Judith Fontaine (Regina Carrol, aka Mrs. Al Adamson) as she embarks on a perilous odyssey to find her missing sister. Said sister has been abducted by the evil Dr Frankenstein, who not only hangs out in a grotty ‘creature emporium’ in a grotty amusement park on a grotty pier, but also abducts scantily-clad women for devilish experiments. Or something. While the Doc rambles on, and he rambles on a lot, about ‘life-giving serums’ and the ‘illusion of reality’ – his raison d’être is a bit vague. ‘She has survived decapitation and is producing enough vital fluids for us.’ 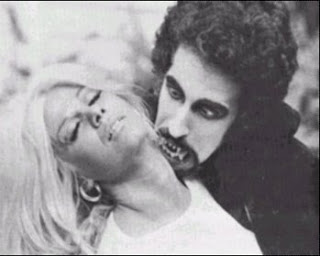 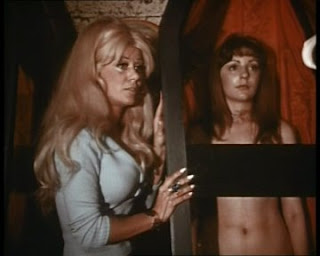 Along the way, Judith stops off at a ‘groovy’ disco that on closer inspection is actually a grotty squat. This film is so low budget, it’s practically Dogme. Funky music and a couple of dopey extras dancing around assure us that this is really a hip and happening club. When her drink is spiked, what follows must surely be one of the highlights of the film. Flailing around on the dance-floor and holding her head Judith really wigs out – while shots of her prancing on a beach and writhing around on a giant spider’s web are subtly intercut. Far out, man! Thankfully she is rescued from the unsavoury club by a couple of amiable hippies who take her to a friend’s pad to sober up. Said pad belongs to Mike, whose bag is ‘making observations’ and he observes that Ms Fontaine’s sister was ‘looking for her own special fantasy.’ 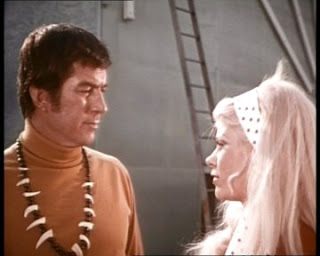 Meanwhile random lovers on the beach exchange heart-rending dialogue – ‘ooooh, Laura. I love to have you in my arms. I love to think that you belong to me.’ Surprisingly, Laura isn’t exactly enamored. No, she is too distracted by a weird noise and before they know it they are menaced by a lumbering and sweaty Lon Chaney Jnr, who may or may not be some sort of zombie. He also plays a lot with a cute puppy. His performance is lent a certain degree of pathos as it was to be his last – he died a couple of years later.

So far, so where-the-hell-are-Dracula-and-Frankenstein? While the title tantalises us with the showdown of the millennium, there are only a handful a scenes randomly slotted into the film featuring the gruesome twosome.

Dracula sports an afro, a goatee and a swishing cape. When he speaks it sounds like he’s talking over a tannoy system – there is a completely unnecessary reverberating echo added to his voice. Dracula apparently needs the help of Dr Frankenstein to resurrect the Monster to scare people so he can drink their fear. ‘Relax Doctor. I will give you orders and you will follow them.’ Ok then.
When Dr Frankenstein says that the count doesn’t frighten him, Dracula shoots a laser beam from his ring that sets fire to a rag hanging on the wall. You will be truly amazed by this bit. Ok. I lied. You won’t. ‘When a man comes into my house and casts no reflection and wears the ring of Dracula, there is no scientific answer for anything. Now what is on your mind?’

The ‘resurrection’ scene takes place in a secret lab with lots of flashing lights and plasma lamps. But wait! There is no lightning! Just as well Dracula remembers some nonsense about a mystical comet that will soon be entering the earth’s atmosphere (at 11.29 pm sharp if you were wondering) and will help generate enough energy to raise the Monster. Which finally brings us to the Monster. When he finally sits up – and it takes a while, not due to an attempt to create tension, but probably due to the huge bulk of papier-mâché on the actor’s head – he looks like a bloated Cabbage Patch doll and is about as terrifying as a boil-washed Care Bear. 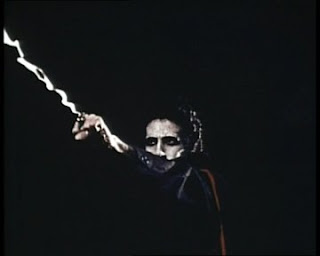 As the film began its life as a biker movie, the majority of the story focuses on young hippies saying and doing cool stuff, like visiting the creature emporium on the pier and staying out of the way of a motley crew of hard-ass bikers. There is also some stock footage of a random protest – ‘Hey c’mon let’s go get ready for the big protest tonight!’ The film also boasts a lengthy montage depicting young lovers Mike and Ms Fontaine strolling along the beach hand in hand. There are endless shots of seagulls and wistful surf gently crashing on the shore like the culmination of their passionate love for each other. They talk to each other too: ‘Its hard to believe there’s so much trouble in the world sitting here listening to the ocean and with someone so nice.’

A few boring lectures by Dr Frankenstein and half-arsed death scenes later (Dr Frankenstein tumbles out of his wheelchair and is garrotted by one of his props in the emporium, the dwarf (yes, there is also a dwarf) sort of trips and falls onto an up-turned axe, the Monster hugs a few people and they fall down), and Mike and Judith finally discover the dreadful secret behind the creature emporium –
‘Mike, do you really believe what you just said?’
‘I believe the doctor is a collector of humans.’
‘That’s horrible.’
Dracula kidnaps Judith and they disappear to a secluded church in the middle of a forest. ‘Your fear will energise the molecular structure of your blood.’
Then, the moment we have all been waiting for - we finally get to the big battle.

If your idea of a big battle, a climactic showdown to end all climactic showdowns, a clash of the titans between two of cinema’s most chilling, iconic and terrifying monsters, is watching two guys limply shove each other a bit and grab each others arms – then you won’t be disappointed. Gasp in awe as Dracula lamely jostles the Monster! Cover your eyes in shock when the Monster feebly prods Count Dracula!

This film has it all: astounding dialogue, stupefying acting, shoddy special effects, no tension, no plot, no pace. Ok, so it doesn’t have it all, but if you come to it with your mind open and your wine glass fully topped up, then you may very well find yourself indulging in one of the best worst movies ever made.

And remember ‘If you've got a fireplace, burn some wood in it. It'll be a lot better than running loose on the streets.’
Al Adamson Dracula vs. Frankenstein Horror Film Mad Scientist So Bad It's Good Trashy