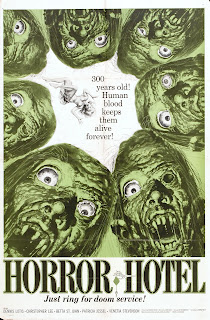 This moody and hauntingly beautiful film easily recalls the work of Val Lewton and is as drenched in foreboding and creepy atmospherics as the likes of Cat People or The Seventh Victim. The opening shots of mysterious hooded figures emerging from the mists with clawed and pointing hands are an unnerving delight.

The story follows Nan, a college student who journeys to a creepy town in order to research its bloody and witchcraft-laden past. As Nan’s professor, Christopher Lee provides another knowing and sinisterly suave performance. Much tension is garnered from whether or not he knows more about the creepy goings on in the sinister town than he lets on and the wry dialogue between him and Nan’s brother sets us on our guard: ‘Have you ever met a witch?’ ‘Perhaps.’

The Lewton tradition of creating terror through suggestion is utilised here with graceful aplomb, particularly when Nan discovers a trap door in her room in the inn and when Pat realises that she is the next victim with the discovery of a number of specific objects, carefully racks the tension. Cryptic conversations between villagers about mysterious forthcoming ‘festivities’ and how ‘he’ will be pleased, become increasingly unnerving. The ever hanging mist over the town highlights its oppressive past and the ghastly atrocities carried out there. The elderly Reverend has barricaded himself in his church to protect himself from something in the village. He warns Nan in beseeching tones to ‘leave before it is too late.’ The way the locals observe Nan, with sinister and detached curiosity might be familiar, but the way it is filmed is supremely doomful. 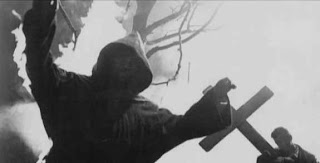 Scientific debates on the supernatural are conducted in libraries and diners and root the film firmly in the contemporary. This is starkly contrasted with the otherworldly and darkly sinister village of Whitewood, still heavily rooted in the past and shrouded in superstition and fear. It is early on when we realise that Nan is obviously out of her depth when she arrives here.

The film, while slow-burning and spooky is not without its clichés and as soon as Nan stops to ask for directions we are met with the first of many, in her exchange with an elderly garage attendant: ‘Not many God fearing folks visit Whitewood nowadays, if I were you I’d…’ But before he can rhyme off and bestow the old cliché about turning back, Nan interrupts him and is soon briskly on her way again. As we follow Nan in her car through mist shrouded landscapes, the film offers us another startling image, that of a lone figure clad in black, standing under a signpost at a crossroads. Our heroine is not deterred by his ominous presence though and even offers him a lift. The shots from inside the car as it moves through the mist are eerily beautiful. Needless to say the sinister passenger soon disappears ominously from the car and Nan inevitably encounters a mute character who tries to warn her but is constantly interrupted. These clichés don’t really detract from the overall tension though and lend the film a certain charm and warmth amidst the bleakness. 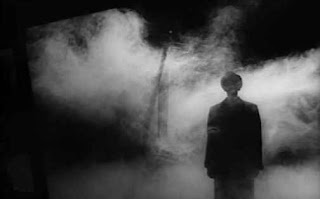 The remarkable use of lighting and the exploitation of primordial fears also enhance another notable scene: armed with a flickering torch Richard descends into the cellar under the inn. Passing beneath the expected cobwebs and chains his light flickers out and he shuffles forward with his arms outstretched… to make a shocking discovery. Another scene involving the residents of the inn gathered together in the shadow-hued lobby, silently waltzing, adds a bizarre and dreamy sheen to events. Those Satanists sure know how to party!

*Spoiler Alert* The film really delivers and surprises when it pulls a ‘Psycho’ and drastically dispatches someone we had come to assume was the protagonist. When one character comments on Nan’s locket and then she loses it – moments before reading about how the sacrificial victim-to-be is chosen by removing a personal possession from them – we realise what’s in store for her. Lee’s inevitable presence in the ghastly proceedings is handled with precision and understatement in what plays out as a strangely intense scene. The fact that this film was also released in the same year as Hitchcock’s masterpiece shows how progressive Horror Hotel actually was.

The Studio-bound shoot gives the film an otherworldly look and an unhinged claustrophobia. Atmospheric lighting and a wonderfully evocative soundtrack enhance the dread: the flickering light and shadows in the inn lobby – like rippling water reflected in the darkness; Nan’s brother carrying her injured boyfriend down the empty street as the street lights flicker out one by one; the injured boyfriend lumbering through the cemetery with a knife in his back while carrying a cross. All these moments combine to create a truly effective and nightmarish film.

@onscarletswalk said…
I watched this last night, surprised at how well it does purely on atmospehere alone, definitely reccomend.
17 July 2011 at 12:23