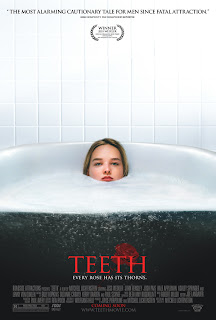 The idea of ‘vagina dentata’ exists in many cultures and world mythologies and is generally thought to be a ‘cautionary’ tale for young men warning of the dangers of pre-marital sex.

Various horror and rape-revenge films such as I Spit on your Grave, Last House on the Left and Ms 45 have featured avenging women ‘castrators’ who defiantly made a stand against aggressive masculinity. It is an idea that has been explored in the horror genre to convey female empowerment. Never before though has a film taken this notion as its raison d’être. And to do so in such pitch black and witty humour simply adds to the enjoyment of watching Teeth.

Dawn O’Keefe is a young woman who, like many young people in Bible-belt America, has pledged an allegiance to God to remain chaste and abstain from sex until she's married. Its in this context that the film has its edge, taking satirical jabs at the oppressive nature of the (largely right-wing) Fundamentalist Christian chastity-abstinence teachings.

Other scenes of social satire include a cringe-worthy discussion in a biology class about female anatomy and while the pupils themselves have no problems using the ‘v’ word (no, not vampire, the OTHER ‘v’ word) the teacher is most uncomfortable. The fact that the image of female genitalia in the text book is covered up, a practice that is actually carried out in some schools in the States, adds to the already high dosage of sly and slick humour in the film. With all this mystery and controversy and the reluctance of the establishment to be direct about basic biology and reproductive health, it is no wonder Dawn’s confusion reaches frenzied proportions. She doesn’t know if she is normal or some kind of mutant, with no one to turn to she, like many teenagers, decides to face her problem and burgeoning sexuality alone and in total confusion.
Brief discussions of evolution for survival throw up contemporary anxieties such as the forced female circumcision that is evident in some cultures. The idea that female genitalia is evolving into something deadly, hangs heavy with Cronenbergian notions of body-horror and the bodily defence mechanisms inherent in the animal kingdom. 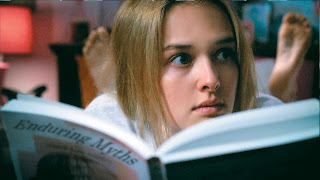 The film is peppered with obvious and very blatant phallic and vaginal imagery: the opening pan shot of sweeping green fields and idyllic blue skies giving way to two huge nuclear power plant cooling towers, blotting the landscape and seeming so out of place: rather like Dawn’s toothy problem; something that shows up somehow and just isn’t meant to be there. The combination of comedy and gross-out horror keeps events feeling lighter than they could have been given the dark subject matter. The down-right nasty chain of events that confront Dawn could have plunged the film into more controversial territory were it not for Lichtenstein’s deft direction and sly wit.

Dawn is surrounded by examples of aggressive masculinity, in fact aside from her bumbling step-father, every guy she knows or comes in contact with has one thing on his mind. Sure it furthers the plot and is quite essential for a film dealing with this particular subject matter, but also speaks of the daily harassment many young women face in a society that balks at educating young people about sex and issues concerning consent. Many of the male characters are a pretty nasty bunch in this film: the seemingly saccharine courting classmate turned rapist; the mentally unstable and possibly incest-baiting step-brother; the creepy gynecologist who administers brutal inspections and the rather charming fellow who spikes Dawn’s drink and then rapes her for a bet. 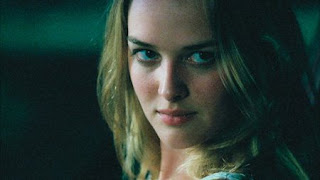 With each of these encounters though we know exactly what’s coming and Lichtenstein manages to build up a fair degree of tension and nervous humour. These loathsome and grotesque exaggerations of maleness on show and the despicable things they do (many of which are condoned by society, or dismissed/excused because 'boys will be boys') ensure the audience sides with Dawn. Jess Weixler really holds things together, her portrayal of Dawn is sincere and she plays the abstinence role-model with straight conviction, easily holding our attention and generating sympathy. We share with her the abject horror she feels with her own body and the anger and frustration she feels at the way young women are treated in society.

It’s no secret that teens have a tough time of it. Not since Ginger Snaps has burgeoning female sexuality been explored so vividly. The coy finale showcasing Dawn’s acceptance of her ‘gift’ may spread a sly grin across your face as it becomes obvious she has become emboldened, no longer playing the role of victim. A coldly logical conclusion to an interesting cult oddity that has a distinct bite.