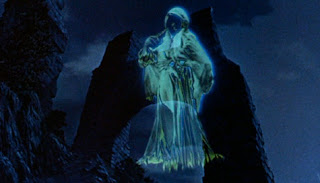 In the aftermath of St Patrick’s Day I thought it appropriate to feature what is perhaps one of the all time creepiest moments in a film about Leprechauns EVER!

Produced by Disney and starring a young Sean Connery, Darby O’Gill & the Little People follows the exploits of amiable town drunk Darby O’Gill (Albert Sharpe) and his ‘hilarious’ attempts to outwit the King of the Leprechauns in order to obtain his fabled gold. Well, his attempts were hilarious when I was about 7 or 8 and was too young to realise the underlying pathos of this lonely old social outcast’s situation: spinning tales of the supernatural and the fantastic to try and win his fellow villagers’ admiration and acceptance.

Anyway, Darby works as a grounds keeper for a well to do family on the outskirts of the village. Because he spends most of his time in the pub, neglecting not only his work but also his daughter Katie (Janet Munro), his landlord understandably decides to hire Sean Connery to replace him.

When his daughter finds out that her father has fucked up once again, she storms off in a moment of desperation, slips and falls on the cliffs and badly injures herself.
It is at this point that one of the creepiest moments in a film about leprechauns occurs, and subsequently provides sustenance for nightmares all over the Emerald Isle: a spectral banshee materialises in an ominous storm over the cliffs and slowly floats towards Katie with the intent of claiming her soul… The banshee is all eerily billowing cloak and hair, and she keeps her most likely hideous face covered by weeping sinisterly into her hands… 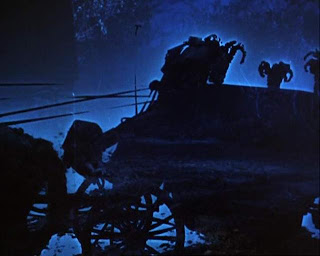 Up until now the film was typical Disney fair: all dancing fairies and comical town drunks, however the suddenness with which it shifts tone is alarming, with barely enough time to thrust your hands over your eyes to avoid seeing the ever advancing banshee. Forget the overrated Child Catcher in Chitty Chitty Bang Bang, this creepy character induces enough chills to freeze the tears of a distraught 7 year old.

If that wasn’t scary enough, along comes a death coach to claim poor old Darby, who has offered to take his daughter’s place in the afterlife. Yeah, NOW he decides to take some responsibility. How touching. In traditional Irish folklore, the death coach, or cóiste-bodhar, is driven by a ‘dullahan’ (that’s headless horseman to you and I). And this is Disney! Fear not though, there is a happy ending involving Sean Connery singing 'Pretty Irish Girl.'