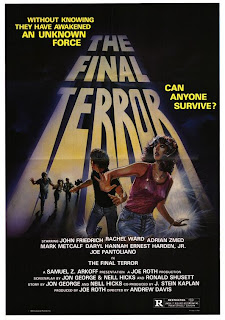 A group of forest rangers and their girlfriends head up into the wild woods for a few days hiking. Unbeknownst to them they are being stalked by a vicious and deranged killer who begins to pick them off one by one… Trespassers will be prosecuted, indeed.

This probably sounds familiar by now, right? A group of people in the middle of nowhere, being murderlised one by one by a largely unseen and obviously unhinged lunatic with sharp things. The early eighties were saturated with slasher movies set in the backwoods of rustic Americana, where partying teens from the city were hacked and slashed without mercy by inbred redneck cannibals when investigating strange noises in dark forests. Friday the 13th (1980), Just Before Dawn (1981), Madman (1982), The Burning (1981), The Prey (1984), sorry, getting a bit carried away, I’m sure you get the drift. ‘Killer in the woods’ films were popular in the early eighties.

There is something inherently creepy about forests that has always captured the darker side of our imaginations. Forests can be unnerving at the best of times: disorientation, isolation and unfamiliarity can all come into play to unsettle us as we wander through their leafy environs, especially when the last shards of sunlight flee from view and we are surrounded by darkness. It is then that the niggling feeling that someone or something could be out there, watching us and waiting to do us harm, becomes utterly unshakable… The horror genre has delved into these murky depths many times before to exploit our fear of forests and the 'unknown' that could be lurking in their depths. 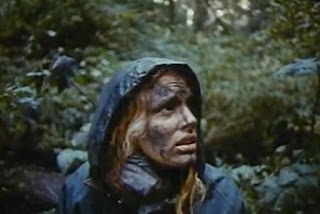 The Final Terror is one such film that preys on our fear of the great outdoors. Part slasher film, part survivalist thriller (in the same vein as Deliverance), the film boasts a cast of pre-famous people such as Daryl Hannah, Rachel Ward and Joe Pantoliano and much fun is garnered from watching them. It does manage to offer up enough surprises to lull us into a momentary false sense of security and genuinely unnerve in some moments.

The film has a number of stand-out scenes, most notably when the group of campers take refuge in their abandoned bus, only for the killer to taunt them from the roof, smashing the windows and creating utter chaos within. The discovery of a seemingly abandoned shack in the forest provides further chills as the wary campers explore its grotesque contents before panicking and taking flight back into the woods.
Another memorable moment occurs when Daryl Hannah’s character Windy is attacked and has her throat slit open. Tension goes through the roof as her friends hurriedly try to stitch her throat closed… Obviously being a slasher film, the characters indulge in the odd joint and a few even break away from the main group to go in search of a secret crop of marijuana. One of the characters, military obsessed Dennis (John Friedrich), also dabbles in some hard drug use and his hallucinatory wanderings through the forest also prove unnerving to watch and provide a menacing sense of paranoia.

Filmed with a low budget, much of the film is too dark to enable us to see what exactly is occurring. A few scenes are lit exclusively by flashlight which provides unnerving visuals and enhances the panic our intrepid campers are experiencing. The pace only really picks up after the half way mark, but the atmosphere conjured along the way is supremely creepy. Obviously we are aware that the group is being stalked before they are and tension mounts as the inevitable attack approaches. The music is suitably atmospheric and effectively adds to the tension.

While none of the characters really stand out, they are portrayed as a likable enough bunch and the acting is uniformly strong. When things become progressively nasty a certain degree of concern and empathy is provoked. When aforementioned nastiness ensues, the characters attempt to do what any rational group of people would and try to stick together and look after each other. At one point they decide to ‘merge with the forest’ in the same way the killer does and they cover themselves in mud and foliage. 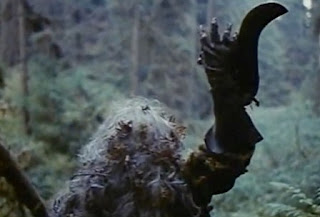 Special mention should be made of this film’s sadistic killer. The director wisely only offers us tantalising glimpses of its hideous visage. Matted hair, clawed hands, covered in foliage and bramble, it moves stealthily through the forest and emerges when we least expect it. The twist at the end (well, to be honest I’m not sure if it actually counts as a ‘twist’ due to the fact that several characters discuss it at the beginning of the film, but they only believe it to be a rural legend) adds a whole other dimension of perversity to proceedings and a strange swath of pathos, too. By the time these events unfold in the eerie light of dawn, you may just feel as exhausted as the survivors and our first proper look at the killer in all its matted, forest-entwined glory is more than a little unnerving.

An unexpected and effectively gripping yarn that treks into the heart of darkness in a strangely engrossing manner. Not exactly the Apocalypse Now of slasher movies, but thoroughly entertaining nonetheless.
Backwoods Slasher Eighties Horror Slasher Stalk'n'Slash Survival Horror The Final Terror