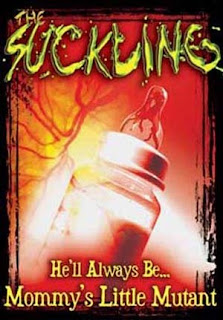 If trashy, splashy, very un-PC horror is your thing, then Sewage Baby will no doubt have you positively convulsing with shameful delight. A monstrously mutated foetus runs amok in a brothel and kills its unsavoury inhabitants. Meanwhile, Daily Mail readers across the nation become inconsolably outraged.

A young college couple discover that they are going to be parents. Before you can say ‘come to daddy’ he whisks her off to a brothel for an abortion claiming they have no other choice. She is reluctant, saying she needs more time to think and points out ‘I’m gonna do, whatever I wanna do.’ She is soon drugged by the domineering brothel matriarch, Big Momma, who makes it her business to make the decision for the young woman.

After she performs a horrific procedure to end the pregnancy, she disposes of the fetel matter in a most undignified manner. What she didn’t count on however, was that on encountering some convenient toxic waste in the sewers, the aborted hell-bent-on-revenge foetus would soon mutate into a gigantic and slobbering beast, complete with claws, fangs and the ability to spin webs of ick (!). Before long the seedy inhabitants of the brothel realise they are trapped in the seedy house and are picked off, one by moronic one, by the ghastly mutant-critter that has a tendency to pop up out of sinks, toilets and various other things connected to pipes in the house. You see, they can’t simply open a door or window and leave the house because, well, not only are they all soft-headed morons, but the wayward mutant bairn has also covered the building in a giant placenta (!). 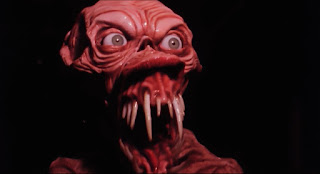 Performances, script and direction are, well, BAD. Basically, a guy in a rubber monster suit (played by Michael Gingold, the editor of Fangoria Magazine) essentially pokes the other actors until they fall down in a squelch of red stuff. The only characterisation afforded the cast comes courtesy of a couple of scenes revealing what kind of sex they are into. There's also a scene featuring a guy wearing a hat with a propeller on top being menaced by a dildo-wielding, dominatrix type. There’s only so many times we can watch a character ‘lose it’, fling themselves onto the nearest couch and exclaim in a rather over-exasperated and highly melodramatic way that they ‘Don’t Wanna Die’, they ‘Just Can’t Take It Anymore’, ‘Big Momma! What Are We Gonna Do?!’ and that they’ve ‘Got To Get Outta Here. Like, Right Now!’ before it gets a tad boring. Director Francis Terri's penchant for weird angles and quirky cuts suggests an attempt was made at stylisation. 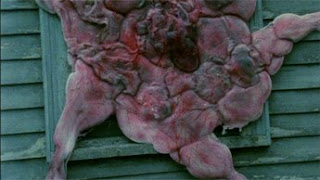 Sewage Baby is exploitative, trashy fun that could be offensive if it wasn’t so bloody awful. It could arguably be read as a highly grotesque pro-life propaganda film, if such a film were to be made by right-wing fundamentalists, a la evangelical Hell Houses. As it is, however, the filmmakers just go for broke to deliver the most outrageous celluloid trash-fest they can. And in that, they certainly succeed. Take away the central subject matter and what you’re left with is a goofy, old fashioned, Troma-esque monster on the rampage movie, entertaining in a 'this is so bad' kinda way. It belongs to that bizarro horror sub-genre of 'killer kids' movies, which includes titles such as It's Alive, Children of the Corn, Village of the Damned and The Brood.