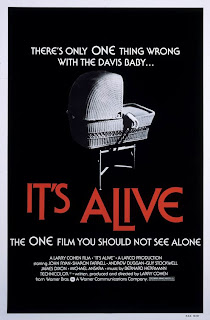 Larry Cohen is renowned for his low budget, high octane and surprisingly thought provoking B thrillers. After penning and directing the blaxploitation movie Black Caesar (1973) and its sequel Hell Up in Harlem (1973), Cohen hit pay-dirt with his outrageous and highly satirical B shocker It’s Alive, a cult hit that crossed over into Seventies mainstream cinema and highlighted the sly wit and subversive bite of Cohen.

Frank (John P Ryan) and Lenore Davis (Sharon Farrell) are plunged into a nightmarish world after the birth of their second child: a monstrously mutated toddler with an insatiable appetite for blood!

With quite a startling premise, Cohen really wastes no time in cutting to the chase and evoking surprising emotional depth from the outset. Sociological and environmental issues are addressed throughout the film. The over-prescription of drugs to expectant mothers, like Thalidomide in the 50s and 60s, and external dangers in the environment, such as pesticides used in mass food production, are mentioned as being possible catalysts in the creation of such a shocking creature. The dialogue and many of the debates between characters throughout is satirically pointed and thought provoking. These weighty issues have never seemed more relevant, particularly when one ponders the vast amount of chemically enhanced food products readily available in local supermarkets. Cohen also points a barbed finger at the concept of unconditional love, parental/child relationships and the strain of contemporary family life. Notions of free-will, the influence of society and primordial human nature are also addressed: while the baby is indeed a killer, it is through no fault of its own – it is still an infant and only seems intent on survival, one of the most basic human instincts. It lashes out when it feels threatened and appears to be merely seeking out its family. Can it be blamed for attempting to preserve its existence? 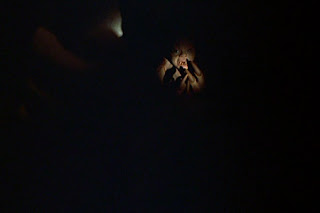 The film is most shocking in its depiction of a society exhibiting zero intolerance of anything and everything that is deemed ‘different.’ References to Frankenstein abound throughout the film: the title is of course lifted from James Whale’s 1931 adaptation, and is heard when Dr Frankenstein deliriously cries out after he has shocked his creation into artificial life. The film wields a strangely affecting pathos and much sympathy is elicited for the monstrous offspring, especially when the ‘village mob’, in the guise of the armed forces, sets out to destroy it – a creature that is here through no fault of its own and is essentially, misunderstood and only relaying on its natural instincts to survive.

Cohen craftily subverts typical imagery associated with family life, notably in the scenes in the nursery and primary school. These places become the space where unnatural and creepy events occur. The womb-like sewer systems where the baby seeks refuge and the milk float that ‘lactates’ after its driver is ravaged amongst the bottles of milk, are also darkly humorous and tremendously effective. We are tantalised by the briefest glimpses of the baby: a flash of a beady eye here, a little fang and a tiny talon there. 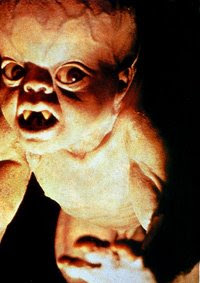 When the police and Frank finally catch up with the infant and corner it in the sewer system, Frank’s parental instincts kick in and he realises that regardless of the pathetic monster’s destructive nature, it is still his own flesh and blood and he makes an attempt to escape with the screaming creature in his arms.
Cohen’s technical mastery is really quite evident in these scenes and he creates a suffocating atmosphere as events play out under the lurid and flashing red lights of the police cars. The powerful ending and sly set up for a sequel is chilling in its simple twist.

The music by Bernard Herrmann, was his penultimate film score prior to his death in 1975. It’s an incredibly effective and moody soundtrack made up of brooding strings and murky noir shimmerings that perfectly enhance the intense and provocative story.