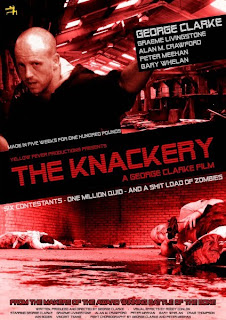 Six contestants.
One million quid.
And a shitload of zombies.

A group of contestants prepare to fight to the death on extreme reality TV show The Knackery. With a reward of £1 million for the last player left standing, the stakes are high. They are raised even higher when a horde of flesh hungry, genetically modified zombies are unleashed to liven things up a bit…

Building on the reputation they cultivated for themselves with Battle of the Bone, Yellow Fever Productions have returned to the stripped back, no frills and no holds barred approach to filmmaking that made their debut feature so appealing.
Shot in five weeks on a budget of roughly £100, the first cut of The Knackery premiered at the Fellow Fever Independent Film Festival in Belfast last weekend.

A ‘knacker’ is someone who slaughters worn-out livestock and sells their flesh, bones and hides. The Knackery is a gruesome reality TV show in which contestants must battle it out to the death in the name of entertainment. With this grimy premise of ‘people-as-cattle’, The Knackery evokes memories of early Tobe Hooper in its unrelenting vision of bloody chaos and claustrophobic mayhem. The setting for The Knackery is, appropriately enough, an abandoned knackers yard and warehouse, complete with CCTV cameras monitoring the unfortunate contestants' every move within the vast and creepy space. 13 minutes after contestants arrive to fight to the death, ‘the knackers’ - genetically modified zombies - are released to keep the players on their toes. Kitted out in white boiler suits the knackers are designed for one purpose only: to tear the flesh off the living and suck them drier than a corpses mouth. 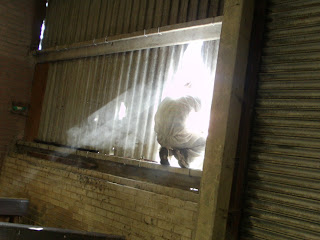 Unspooling as a vicious satire on reality TV, The Knackery poses the pointed question - How far will reality TV go to entertain its audiences? As most of the contestants on the likes of Big Brother will only too gladly testify – some people will do anything for their 15 minutes. This goes some way to ensure they can be fully exploited in the name of entertainment and it is this very concept that pumps through every scene of The Knackery. These contestants are unaware of the very real dangers they will face however, as the show's sinister executives ensure that most of the carnage is kept off screen… Writer/director Clarke plays an undercover reporter attempting to expose the corruption and evil behind the show. If he is able to stay alive long enough to do so. The pitch black humour and caustic parodying of reality TV echoes the likes of Series 7: The Contenders, Dead Set and The Running Man; whilst its tongue may be in cheek – it is wedged there pointedly.

The show’s unhinged host is portrayed by Alan Crawford with deranged glee. His performance recalls the likes of similar horror hosts/personalities pedalling low grade and questionable entertainment, such as Coffin Joe, Captain Spaulding and Dr Madblood. His wacked out, way-too-jolly presentation has a creepy menace at times; particularly when events on the show become increasingly grim. 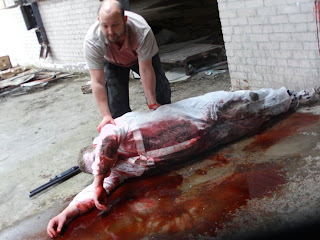 The immediacy of the handheld camera work brings us right into the midst of the ensuing mayhem and bloodshed and Clarke’s ‘on-the-hoof’ and guerrilla-style shooting seeps through into the grainy aesthetic of the film, completely belying the film’s lack of budget. As the story builds to a crazed climax, the already kinetic pace is whipped up into a further salivating frenzy that doesn’t let up or disappoint. Quietly creepy moments come when we see events from the footage recorded by the hidden cameras as characters silently explore their surroundings with caution, often seen walking out of shot, only to run back into it and out again as they are pursued by the marauding and foaming-mouthed zombies.

The splashy special effects courtesy of Roddy Conlon are impressive and the fight choreography is handled exceptionally well, with many of the actors performing their own stunts in the film’s numerous fight sequences. Written in one night the plot may be as light as a freshly drained victim, but The Knackery more than compensates with its relentless narrative drive and irresistible gung-ho verve.
The ethos of YFP – to do whatever it takes to realise their vision, for as much or as little money as they can scrape together – and most importantly, to have fun whilst they do it – shines through in The Knackery. What the film lacks due to budgetary restraint, it makes up for with gritty panache, dogged determination and free-spirited approach to indie filmmaking.

The Knackery delivers chills, thrills and a hell of a lot of spills as effectively as a cattle prod to the testicles. A rabid frenzy of a film.
George Clarke Indie Film Low Budget Yellow Fever Films Zombie Film

I Like Horror Movies said…
Sounds awesome, I gotta get my hands on this one! Havent even heard of it otherwise?
2 September 2009 at 01:11