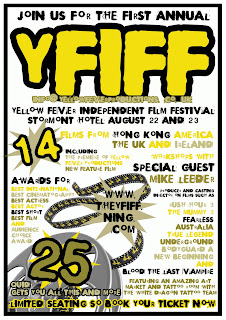 The first annual Yellow Fever Independent Film Festival kicked off this weekend at the Stormont Hotel in Belfast. Despite its brief duration of a mere two days (22nd-23rd) the festival managed to cram in an impressive array of film screenings, workshops, Q&A sessions with filmmakers and a whole host of other exclusive events that had film fans positively foaming at the mouth.
Whilst numbers were quite modest, they certainly weren’t bad for a local independent festival’s debut - the first of its kind in Northern Ireland – particularly when one considers the shoestring budget with which it was put together, the fact that only five months of preparation was available and the unfortunate and rather notable lack of support from local big-hitters such as NI Screen, who could easily have lent some support, financial or otherwise. Those in attendance were nonetheless treated to a memorable event and will hopefully spread the word to ensure next year’s event will be bigger and even better…
Festival organiser and founder of Yellow Fever Productions, George Clarke, set up the event as a means to support and promote local independent filmmakers and provide them with a platform to showcase their work and get some recognition; as well as giving those in attendance the opportunity to see what other independent filmmakers from around the world are producing. Soon after visiting the Freak Show Film Festival in Orlando, Clarke began to take steps to make the YFIFF – something he was thinking about whilst shooting Battle of the Bone back in 2007 - a reality.

Kicking off proceedings was the short film Injected. This film was shown to audiences as the Screening of Recognition and served to highlight the work of a local film maker who the festival organisers believe should be recognised as a future talent of Northern Ireland. Directed by 15 year old Aidan Gault, Injected is the unsettling tale of a mysterious experimental human drug trail gone awry with disturbing results.
The Screening of Recognition is one of two new traditions that should hopefully carry over to future YFIFF events. The second tradition is the closing event; the exclusive premiere of a brand-spanking-new YFP feature film. This year’s premiere was a screening of The Knackery. Made in five weeks with a budget of around £100, The Knackery unfolds as a darkly humorous critique of reality TV shows, featuring a small group of unfortunate contestants pitted against rabid zombies and a fight to the death on the titular show.

A plethora of short films were also screened at the festival and these included the Hong Kong/Ireland romantic action comedy Somebody To Love; One Last Love Song - which unfurls as an ageing songwriter reminisces about the inspiration behind one of his songs (this short, with its breathtakingly lush black and white photography won the award for Best Cinematography); the blackly comic serial-killer musical Death In D-Minor (which received the award for Best Local Film) and the beautifully lensed documentary The Northern Lights.

The special guest at this year’s festival was Mike Leeder, Far Eastern editor of Impact Magazine and producer of independent movies such as Underground, Left for Dead and 10 Dead Men. Leeder hosted a number of workshops providing exclusive insight into the workings of the independent film industry and offering advice to those keen to become involved in filmmaking.

As well as a shed-load of film screenings, the festival was also home to the independent Arts Market and the White Dragon Tattoo Room; where anyone who felt inclined to do so could indulge in a little body-modification. The Arts Market provided the opportunity for local artists to promote their work. Amongst those present were Art Not Names, Spiral Threads, Divinus Photography and Big Hammer Productions.

The ethos of the weekend was about realising one’s dreams and ambitions, socking it to The Man and generally saying a big ‘fuck you’ to all naysayers seemingly intent on making life difficult for aspiring independent filmmakers. Providing not only inspiration, Yellow Fever Productions also offer up practical advice and support for those who long to immerse themselves in the world of film making. YFP consistently prove that all you need to realise your ideas is the self belief, grit and determination to succeed. With a mantel like that, let’s hope they are around for a long time to come and keep doing what they do best…

Durutti said…
Nice, and YF are already promoting it to their fans.