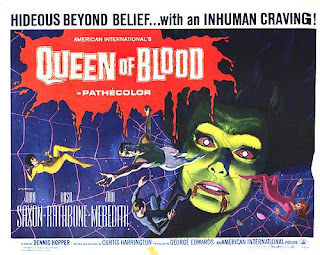 1990. Scientists on Earth receive a distress call from an alien ship that has crash landed on Mars. A small rescue team made up of scientists and astronauts are dispatched to rescue the alien crew. Only one survivor is found, a strange woman with lurid green skin. Back on board their own ship, the scientists discover that their guest has an insatiable appetite for blood and it isn’t long before she begins to pick off the crew, one by one…

In the 60s Roger Corman’s production company AIP bought the rights to quite a few Russian sci-fi films and wrote new stories around the various special effects sequences; reusing the expensive footage in new low budget films. Queen of Blood is one such film and reuses footage from Russian sci-fi epics Niebo Zowiet and Meshte Nastreshu. These scenes provide a number of the film’s highlights, as much of Harrington’s footage, particularly in the early scenes, with their kitschy ideas about how the future (1990) would look, are pretty dated.

The script, also penned by Harrington, displays surprising intelligence and features a number of provocative debates on issues such as morality and logic. After the alien gorges herself on Paul’s blood, the reactions of the other astronauts are most interesting. Allan and Laura claim that the alien is a murderer, however Anders argues that the others shouldn’t impose their moral codes on her as she is not human – her kind may very well have different moral standards. He goes on to say that this doesn’t mean that they are any better or worse than humans: just different. The alien is clearly only reacting to her instinct to feed.

The rational discussions that pepper the screenplay are really quite refreshing; in a lesser film the humans would no doubt decide that the alien was nothing but a killer and blast her out of the nearest airlock. The screenplay at times suggests that scientific advancements such as space exploration can be dangerous – and unfolds as a cautionary tale of Frankensteinian human ambition that could result in dire consequences. 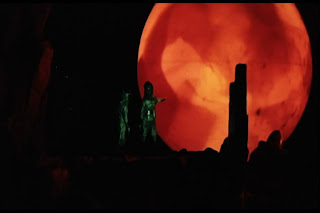 Queen of Blood, much like Mario Bava’s Planet of the Vampires bears an uncanny resemblance to Ridley Scott’s Alien and appears to have had no small influence on that particular classic. The tale of a small research crew answering the distress call of an alien ship, only to find the dead body of an alien life-form but managing to bring one surviving alien creature back to their own ship, is uncannily similar. Of course when our intrepid scientists ‘rescue’ the alien creature and bring her back to their own ship, she begins to prey on the crew and devour them one by one. As highlighted in the plight of the crew member who must remain behind on the alien vessel as there isn’t enough room for him on the vessel making the return trip to his own ship (!), the crew, much like the crew of the Nostromo, are completely indispensible. Their mission is to retrieve a ‘specimen’ from the alien ship at any cost to bring back to earth for scientific research.

The discovery of a batch of alien eggs prompts more thoughtful discussion from the crew. While they see how dangerous the alien was to their own wellbeing, they still understand that their discovery is extremely important and they have little or no right to annihilate the spawn of another species. When Allan reveals his plans to destroy the alien’s eggs, Laura is quite shocked and exclaims ‘That’s not our decision to make.’ Scientific detachment must be adhered to, even if it goes against one’s gut instinct.

Events unfurl languidly, taking time to develop the characters and create a creepy atmosphere ripe with menace and mystery. Harrington’s cinematographer Vilis Lapenieks bathes proceedings in an otherworldly sheen and the film, despite its low budget, at times looks rather beautiful. The scenes onboard the scientists’ ship are beautifully lit and prove quite striking. The impressive special effects footage from the other films is effortlessly inserted into the story and enhances proceedings effectively rather than jar them. 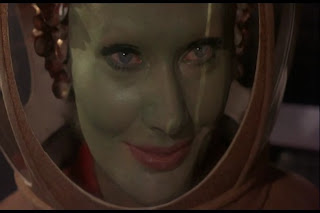 One notable scene features the alien advancing towards Robert along a dark and moodily lit corridor. As he struggles to see who is approaching, she keeps vanishing and reappearing; each time moving ever closer to him. Another eerily beautiful moment occurs when the alien, fresh from guzzling Paul’s lifeforce, turns slowly to look at the camera, her eyes glinting seductively as they reflect an otherworldly light. Florence Marly as ‘The Queen’ is quite a sight to behold, with her green skin and beehive hair: the alien queen exudes a strange sexuality, alluring yet insidiously sinister.

Queen of Blood boasts a rather impressive cast roster including John Saxon as Allan, Dennis Hopper as Paul and Judi Meredith as Laura. All provide sturdy performances particularly the young Hopper as the slightly eccentric Paul, and Meredith as the level-headed and rational Laura. Laura is arguably a proto Ripley from Alien, self assured, resourceful and strong willed. In a nice subversion of the usual conventions, it is Laura who eventually rescues Allan from the clutches of the blood-thirsty alien.

Queen of Blood is an effective little thriller, full of moodiness and perverse charm. As mentioned it is also way more intelligent and thought provoking than one might expect, considering its origins and low budget. A testament to the power of a good story, great writing and the knack of making the most of one’s limited resources.
Aliens Dennis Hopper John Saxon Low Budget Roger Corman Sci-Fi Sixties Horror Vampire

I Like Horror Movies said…
I have quickly fallen in love with Planet of the Vampires, but I had never heard of this one. Between the review and the screenshots, it looks like something right down my alley, Ill be sure to pick this one up James, thanks for the review man
9 August 2009 at 17:28

James Gracey said…
Hey Carl,
Thanks for stopping by. I picked this up in a vintage record shop in Belfast a few weeks ago. Its on one of those 'Double Feature' discs with another film called Creature from the Black Lake. The whole thing cost me £2 and is on Region 0. I checked on Amazon.co.uk just now - they have a few copies for sale - worth every penny!
Thanks again. :P
10 August 2009 at 10:16

I Like Horror Movies said…
Dang bet its in PAL, I might be able to play it on the XBox, but I will see if any other sources make themselves available! Thanks again, looking forward to grabbing this one
11 August 2009 at 00:11

Mykal Banta said…
James: this one looks very cool and seems forever linked somehow with Bava's Planet of the Vampires. Your screenshot of the green woman looks right spooky! I'm in! -- Mykal

CARL: I found a great source for tons of out of print horror where it is available:
A Ghost House Production. The quality is sometimes not first rate, but on out of print or hard to find stuff, who can kick?

Mykal Banta said…
James: I just watched this finally and agree with your post. I found it really, really watchable from beginning to end, and oddly beautiful (oddly in that it had a colorful, dreamlike quality). The acting was pretty cool, too. Hopper really gave it his all, not just walking through the role, and it was interesting to see him as leading man. Thanks so much for the recommendation. – Mykal
2 September 2009 at 15:15