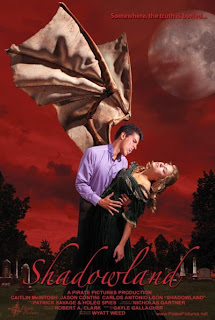 Construction workers unearth an ancient stone cross and what appears to be a wooden stake whilst renovating a church. Removing the stake from the ground they inadvertently revive Laura (Caitlin McIntosh), an amnesiac vampire who crawls out of the earth and sets off across the city trying to remember who she is and what happened to her. As she desperately tries to piece together her tragic past, she is pursued by the mysterious Julian Hess (Jason Contini) who is aware of her true nature and hell-bent on sending her back to the grave…

Shot on a miniscule budget over the course of a matter of weeks, Shadowland marks the feature length debut of writer/director Wyatt Weed and was recently screened at Belfast’s first Yellow Fever Independent Film Festival where it received an award for Best Director. The film unfolds as the epic tale of a woman who has suffered a terrible trauma and seeks to uncover her past to piece together her life. The fact that she is actually a latent vampire comes second to the attention lavished on the exploration of her character’s complex past. Of course, being an amnesiac, Laura doesn’t actually remember that she is a vampire. Weed has fun playing around with some of the more traditional conventions of vampire movie lore and his unique creation falls somewhere between Zoe Tamerlis in Ms 45 and Jodie Foster in Nell. 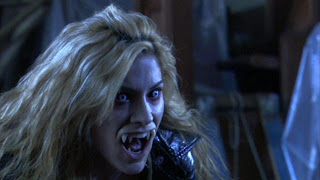 At its full-blooded heart, Shadowland boasts a sympathetic (anti)heroine. This is perhaps one of the most innovative moves by director Wyatt Weed, and one that is enriched by a truly outstanding performance from Caitlin McIntosh in her debut film role. McIntosh commands attention, even though she remains mute throughout much of the film – due to having her throat slit in the 19th century, you see. The bulk of the film is based around her voyage of self-discovery. She is drawn to certain places throughout the town as she feels a strange connection with them. These moments trigger flashbacks that gradually piece together her fragmented and strangely sad past.

We discover that she was seduced by a mysterious stranger called Lazarus (Carlos Antonio Leon) whom she fell in love with. Her actions invoked the wrath of her disapproving parents who eventually placed her into the hands of the local pastor (Dale Moore) in order to save her soul. The pastor, a lecherous fiend intent on claiming Laura as his own bride, would eventually stake her through the heart and bury her; ensuring that if he couldn’t have her – no one could. So immense was his love for her, Lazarus has been trying to find her ever since she was, unbeknownst to him, dispatched by her pastor. Dracula and Mina eat your hearts out. 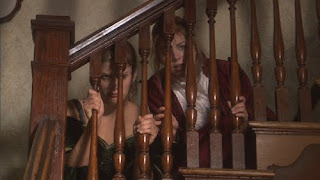 We experience the flashbacks as she does and as a result can’t help but feel concern for her as Hess closes in. Even when Laura discovers and reveals her true form, we still care about her - so much are the traditional boundaries of good and evil blurred in Weed’s provocative screenplay. Each of the characters are well drawn and fully realised through sturdy performances – all are fully fleshed, flawed and distinctly human.

Julian Hess is a contemporary Van Helsing type who works for the church slaying vampires and attempting to save souls. Hess utilises various alchemic and mystical methods to track his prey. Indeed, another interesting aspect of the film is the notion that vampires have souls too and are in need of redemption as much as mortals, in order to find everlasting peace.

Weed also has some fun with the narrative structure, and despite the film’s frequent flashbacks, the narrative flows flawlessly and consistently. These flashbacks intricately weave together the compelling story of how Laura became a vampire. She is ultimately a tragic heroine.
The film's poster makes Shadowland resemble the vampire-movie equivalent of Gone with the Wind, and to an extent, it is. The scope of the story is ambitious to say the least, as it unfolds over decades and twists and turns around an ultimately doomed love affair and a desperate quest for self-discovery. Weed does an admirable job of weaving it all together as well as consistently offering up a few unique and surprisingly effective twists to hold your attention. 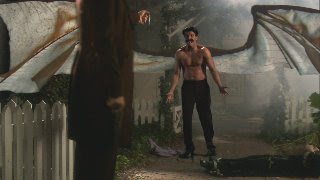 Great use is made of the St Louis locations, the director’s hometown, and the slick and polished look of the film belies its low budget. Particularly noteworthy are the recreations of turn of the century America where the flashbacks take place, and despite the film’s limited resources, are expertly realised. There is also an undeniable post-Buffy sense of irony and fun, particularly in the impressively choreographed fight scenes, with their high octane energy, style and wit. CGI is wisely kept to a minimum throughout proceedings but looks more than adequate whenever utilised.

Shadowland is a strangely touching film that, whilst certainly not lacking its fair share of chills and thrills, is more intent on conveying a compelling story that will trickle seductively into your consciousness for some time to come…
Indie Film Low Budget Shadowland Vampire Wyatt Weed

I Like Horror Movies said…
Another one thats off my radar but sounds awesome. Before these reviews I had no clue what YFIFF was, but apparently they are Horror gods if each of these films pan out to be as good as they sound
2 September 2009 at 01:14

James Gracey said…
Hi Carl. Yes, this year was the first - hopefully of many more to come - YFIFF. The guys who organised it really went all out to provide audiences with some great genre films that were off the beaten track. There were quite a few filmmakers I wasn't initially familiar with - but ones that I shall be keeping an eye out for in future.
7 September 2009 at 12:16