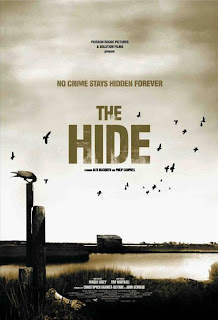 Roy Tunt, a compulsive birder (that’s bird watcher to you and I) settles down in a secluded bird-hide on the barren Suffolk mudflats to try to catch a glimpse of the elusive ‘sociable plover’. A brewing storm brings Dave, a bedraggled and bloodied young man, to the hide to seek shelter. Over the course of the day the two men seem to bond until news of a police manhunt comes over Roy’s shortwave radio. This puts both men on their guard, forcing their impromptu and already brittle relationship to a shocking conclusion.

Adapted from his own play, writer Tim Whitnall has carefully crafted a complex and rather compelling two-hander. The story unravels in one location – the bird-hide – and the action rarely leaves the four ramshackle, draught-ridden walls. The bulk of the film consists of the burgeoning relationship between the two men as they size each other up, make small talk and eventually confess deep, dark and sordid secrets.
A stark and moody opening sets up the bleak atmosphere as we follow Roy (Alex Macqueen) through desolate wastelands on his way to the hide. It is of course situated in the middle of nowhere. The sense of isolation only grows as we get to know the characters and realise that both men are ‘outsiders’ and exist on the periphery of society: Roy is a seemingly awkward and socially inept compulsive bird watcher whose only source of company before Dave shows up is a photo of his ‘estranged’ wife. Dave (Phil Campbell) is a confused and troubled young man who has got caught up in some dodgy dealings with shady individuals. 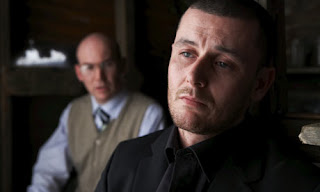 The quietly brooding menace of Dave initially juxtaposes with the rather prim and compulsively precise Roy, however as the story progresses we soon learn that first impressions can so often be misleading… There seems to be a quiet commentary on British class and social stereotypes too – Roy is a middle class ‘true Brit’ with a penchant for casual racism; Dave is a gritty, working class ‘Northerner’ who prides himself on being a straight-talker.

Both characters seem slightly unhinged in their own way – though one more obviously so than the other. To begin with anyway. Roy is a creature of habit and doesn’t appreciate his routine being intruded upon by Dave. The script twists and turns, throwing up surprise after nasty surprise – but it does so through words, dialogue and interplay between the two men. The atmosphere is added to with the use of ‘bird-watching’ language – for example Roy explains that a group of crows is referred to as a ‘murder’ of crows; a ‘deceit’ of lapwings etc. 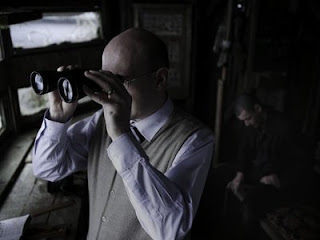 In terms of ‘action’ nothing much happens until the third act – until then the film is all quiet menace and slowly rising tension. A darkly comic scene unfolds, perfectly highlighting the film’s absurd sense of humour, as the two men discuss their mutual admiration of power tools – one can’t help but wonder what, or who, they’ve used power tools on in order to garner such solemn respect for them. The intrigue and suspense continue to mount as the lines between the men become blurred and it becomes less clear who is in danger from who. It is certain though, that one or both men are in danger. Certain little throwaway remarks at various times shed subtle light on each of their characters. When they begin to share information of a more personal nature about themselves to each other, things become very uneasy. Add to this awkward mix the fact that Dave seems to be experiencing distressing flashbacks of body parts being picked apart by crows.

The Hide at times feels very theatrical (and not just because it’s adapted from a play – though that may indeed have something to do with it!) with its single location, dense dialogue and careful character studies. 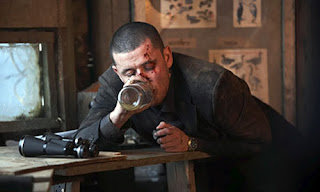 The third act is announced with a gruesome discovery in a notebook that turns all expectations on their head – well, it might not, depending on how much one has been second guessing events and looking out for little signs along the way that heavily hint at revelations to come. Credit to Losey and Whitnall though, for at least attempting to play around with genre conventions and types.