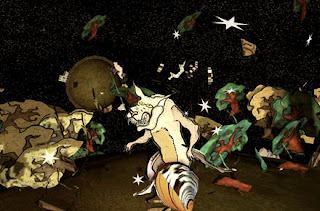 Filmmaker Tim Hope began his career experimenting with computer graphics and editing packages. His short film The Wolfman was apparently inspired by a performance piece that he and a colleague created and titled ‘Man-chine’, a hectic story involving a character comprised of part man, part machine. The pair eventually realised that the performance piece was going nowhere and Hope was prompted to transform his ‘soundscape-laden mechano-human exploits’ into a short animated film.

The result was The Wolfman, the strangely disturbing tale of an astronomer whose love of the moon is so strong he longs to become a werewolf. I just caught this by chance, very late one evening on Channel 4, a few years ago and it has remained lodged in my head ever since.

The film opens with a creepy fairytale-esque scene in which a young girl gingerly picks her way through a spooky forest – all the while she is stalked by successively intimidating camerawork while a worrying nursary-rhyme warns about a mysterious man with ‘a hairy back.’ Something pounces on the girl and an increasingly irritated analogue that combines with stomach-churning sound effects (including some from The Shining) and layered 2D/3D animation are utilised to convey the rest of the story, which takes up with the deceptively soft-spoken astronomer. The unnerving and in your face sound effects have something quite guttural about them – the ever frenetic editing also helps enhance an atmosphere of carnality and forbiddances as the film roars to its cacophonous climax, with the lycanthropic astronomer bounding off into space ‘smashing planets’ and wreaking bloody havoc.

The Wolfman went on to win the Edinburgh Film Festival McLaren animation prize in 2000, and was eventually abridged and converted into an advert for playstation2.

Matt-suzaka said…
That is fantastic, James. Love the animation style and that is a style I would love to see in a feature length film. Very cool, thanks for sharing!
15 November 2009 at 08:16

James Gracey said…
Its a great little film, isn't it Matt? Like I said, I just happened to catch it on TV a few years back - it was on very late at night - and there was just something about it that stuck in my head - its strangely alarming.