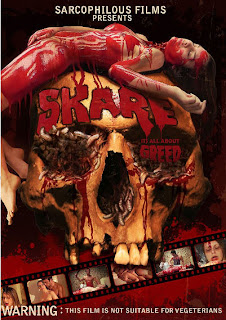 The story behind director Michael J Murphy’s recent low budget, darkly comic and rather splattery Skare, is an interesting one. Basing the script on his own short story, Murphy set about filming in 2001. Disaster struck, however, when the unprocessed film got lost in the post on the way to be developed at Kodak. Murphy found himself in dept and without a film.

Skip ahead a few years and as Murphy began working on a new project, he found himself drawn back to the original script of Skare. Gathering together a new cast and crew, the tenacious filmmaker set about filming Skare once again.

The story focuses on the unlikely, and increasingly disturbing, partnership between Martha - the reclusive owner of a country club and Dan - a young escapee from a nearby psychiatric hospital. Dan soon discovers that Martha has sinister ulterior motives for her kindness and following the discovery of a decapitated head in a refrigerator, it soon becomes very clear the lengths she goes to in order to cook up the meaty meals she serves to Dan and her customers...

Matt-suzaka said…
I’m a big fan of independent - low budget horror films and Skare sounds like a decent entry into the crowded mix. I cannot believe that the director already made it, only to have it lost in the mail, but to go forth and make it again and get it our there for people to see is a true testament to his passion. Great review, James!
18 November 2009 at 21:10

James Gracey said…
Always a pleasure to have you drop by, Matt. Yeah, Michael J Murphy seems like an interesting filmmaker. I wasn't aware of him until I got this DVD to review. I did a little research and found a cool interview with him - http://www.zone-sf.com/michaeljmurphy.html

Skare reminded me a little of Pete Walker's early output (after all the sex comedies) - its well written and tightly constructed - and he did it all on less than a shoestring budget. True testament to his passion indeed!
19 November 2009 at 10:14

I Like Horror Movies said…
This one wins the "Official best cover art ever made" award for awesomeness
20 November 2009 at 02:10

In the mean time, there is a lot of Michael J Murphy back catalogue becoming available on the official youtube channel at https://www.youtube.com/channel/UCLHnjYjZiA6uVzQi0iCpI8A