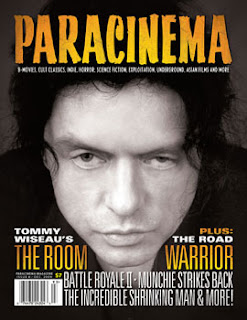 Issue 8 of Paracinema is now available. Hard to believe that the magazine is actually now on it's eighth issue (scary how time flies)! Not so hard to believe is that it's still as great a publication as it's ever been and just as lovingly put together, designed and compiled by a dedicated and passionate hard-core of individuals.

Amongst the staggering array of mouth-watering pieces included in the pages of issue 8 are the following features: War May Be Hell, But a Sequel Is Purgatory: Thematic Combat With Battle Royale II: Requiem by Emily Intravia, Love, Loss, and Astounding Growth in The Incredible Shrinking Man and Attack of the Fifty-Foot Woman by Jessie Robie and The Serial Killer’s Mind: Comparing and Contrasting the Male Psyches in Henry Portrait of a Serial Killer by Brantley Palmer.

If that isn't enough to whet your appetite, click here to check out more...

Support our independent film magazines and help publications like Paracinema to continue producing quality material that you'd be hard pushed to find elsewhere. Click here to pick up a copy of issue 8. It's a done deal.
Genre Movies Independent Publishing Paracinema Magazine

WriterME said…
Sounds interesting, especially the article on Henry (despite finding the movie rather disappointing, it still fascinates me).

Question: I'm currently planning a paper on horror/magic/bizarre magick and would love to do a little sideline article for Paracinema on HG Lewis' The Wizard of Gore. Has anyone done a piece on that yet? I've browsed through the back issues, but wanted to make sure.
3 January 2010 at 17:36

James Gracey said…
Hi Madelon.
Paracinema is such a cool magazine - you'd be really quite lucky to find similar content elsewhere, and your paper, which by the way sounds pretty interesting - a topic I've not really come across much on my travels - would find a great home within it's pages. An interview with HG Lewis was published in Paracinema a few issues back - though I don't remember off hand if they've done anything about Wizard of Gore specifically since then. Why not drop them a line and pitch your idea? They're a lovely bunch and are always glad to hear from writers interested in contributing features. You can email Christine at christine@paracinema.net

best wishes to you, too, and many thanks for the information! The magic/bizarre magick angle is not too easy to find. I ran into two bizarre magicians at a conference last year, where I was presenting on haunted attractions, which is when I first learned about it.

It is a very interesting field, though, with (in my opinion) a lot of links to horror. The deadline for the paper is set at the end of March; if you're interested, I can let you know if/when it's published.
4 January 2010 at 16:29

James Gracey said…
Please do! I'm most intrigued - good luck with it all.
This site may also be of interest to you - its sort of a social networking site for those involved in the study of 'cult cinema' - http://cultmediastudies.ning.com/

WriterME said…
The site looks great; although I'm more a drama/performance person than a movie person, it seems worth checking out (especially considering that Matt Hills is on there; I loved his book The Pleasures of Horror).

Shameless plug, and to give you an idea of the issues I'm researching: my first article was published just before Christmas and can be found here: http://irishgothichorrorjournal.homestead.com/HauntedAttractions.html
4 January 2010 at 20:29

James Gracey said…
Thanks for the link! I'm a big fan of the Irish Gothic Horror Journal and look forward to checking out your article.
Best wishes - and thanks again!
5 January 2010 at 09:39

WriterME said…
Terrific! No rush, of course, but when you get around to reading it, would you mind dropping me a line with any questions or comments you might have? This paper is the first step in my dissertation, the research ongoing and ideas are still being formulated. Any input is very welcome!

James Gracey said…
I surely will! Thanks again for the link. Do you think you will contact Paracinema? I think an article about magic/bizarre magick and The Wizard of Gore would be right at home within their pages.
7 January 2010 at 00:57

WriterME said…
I've been in touch with them and they are very keen, so the writing of that is definitely going ahead. :) Am aiming for the deadline for the next issue, which is Feb 15.
7 January 2010 at 08:13