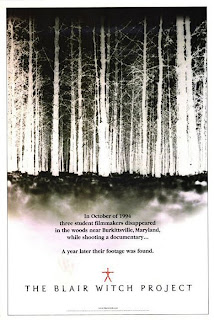 In a film peppered with spine-tinglingly creepy moments, it still wasn’t difficult to select the very creepiest. Just the thought of it sends shivers down my spine as I type this.

Josh, Heather and Mike travel to Burkittsville (formerly Blair), Maryland, to interview locals about the legend of the Blair Witch for a documentary Heather is making. The locals tell them of a hermit named Rustin Parr who lived in the woods surrounding the town. He kidnapped local children and brought them to his house. It is said Parr brought the children into his basement in twos - he could apparently feel their eyes staring into his soul, so he would kill one child while making the other face a corner. He would then kill the child – rooted to the spot in fear - in the corner. Parr eventually turned himself in to the police, claiming that the spirit of the Blair witch convinced him to kill the children.

After a couple of harrowing days and nights lost in the forest, Josh disappears and Heather and Mike come upon an old house in the middle of the forest. Searching frantically for their friend inside the house, they become separated and increasingly panicked. Eventually Heather follows screams into the basement where she is greeted by the sight of Mike standing stock still, facing a corner… Something attacks her from behind and she drops her camera. 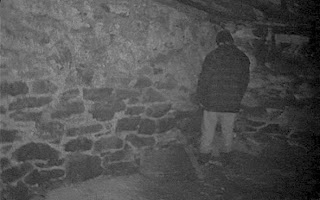 The sight of Mike standing in the corner is so simple and uneventful, yet because of the story of Parr and his bloody exploits – and the fact that something so wilful and terrifying ensures he doesn’t move from his post in the corner – so incredibly affecting. We know what’s coming and its immense creepiness lingers long in the mind afterwards…
Creepy Scenes Ed Sanchez and Daniel Myrick Horror Film Rustin Parr The Blair Witch Project

Matt-suzaka said…
I always was very freaked out by this entire sequence too. It is the scariest moment of the film and that house is so incredibly frightening to top it off. Great choice!
6 December 2009 at 18:47

Mykal said…
james: Bingo! that was the scene, or perhaps the shot, that still gives me the Heebie Jeebies.

I still think that was the most frightening film I've ever seen. It was the only film I ever watched that actually frightened me. Most modern "horror" films I simply think of as gross and not frightening at all. The older films - the classics - like Whale's Frankenstein, I think of as beautiful. -- Mykal
8 December 2009 at 03:26

I Like Horror Movies said…
Agreed, so simple yet so effective, I still stand behind BWP as being one of the most brilliant films of the 90s!!
9 December 2009 at 04:31

: said…
Cool to see this one get some love. While I find that it doesn't have quite the "rewatch value" -- for me, anyway -- that many films have, those first couple of times I saw it in the theater I thought it was brilliant. Soooo scary.

Remind me to tell you sometime* about a camping trip with my son and his cousins a few years ago. They were all between the ages of 9 and 12, and we watched THE BLAIR WITCH PROJECT on a portable DVD player in the middle of the pitch-black woods at about one in the morning. Fun stuff!

James Gracey said…
You know, that sounds like a great camping trip! It reminds me of the first time I almost watched The Shining. My parents and brother and I were camping in Gosford Forest Park and my brother and I (he was about 6 or 7 at the time, I was around 12 or 13) were watching a little portable in our tent. The Shining came on and as soon as my mum realised what we were watching, she made us switch channels... Good times!
18 November 2013 at 19:23