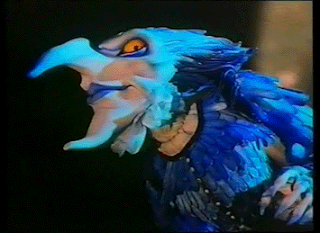 The usual notion of the Sandman as a benevolent character from European folklore who sprinkled 'sleeping' dust into children’s' eyes to send them to sleep, is darkly subverted in this beautifully realised and highly stylised animated short. The filmmakers have instead opted to base their titular character on a menacing creature that brings horror and suffering to children inspired by E.T.A. Hoffmann's novella The Sandman. Hoffmann’s richly textured and harrowing tale abounds with psychoanalytical readings such as the Jungian notion that sleep equals a denial of life, therefore the state of unconsciousness is an invitation to death.

Berry clearly draws influence from early Expressionist classics like The Cabinet of Dr Caligari, M and Nosferatu to create a dark and anxiety-ridden atmosphere, awash with nightmarish colours and a distinctly gothic feel. The look of The Sandman is quite similar to several Tim Burton animations such as A Nightmare Before Christmas (a film Berry would later work on) and Vincent, and the characters have that same slightly startled and sad expression on their faces. The creepy music and eerie, bloodcurdling sound effects add to the sinister atmosphere and Berry's use of lighting to create startling shadows and pools of glowing light is highly effective. The Sandman is a cold and upsetting story - the little boy’s mother seems unsympathetic to his plight and her actions of returning him to his bed ultimately seals his dark fate. 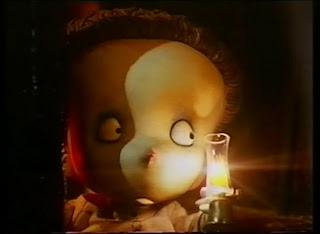 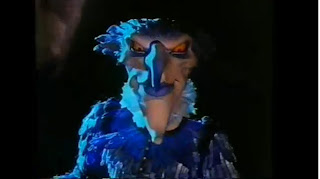 The Sandman himself is a truly haunting spectre, with a twisted, crescent-moon face, huge piercing, beady eyes and a fierce, beaklike nose. His movements, while wonderfully theatrical, are also distinctly spidery, as he looms up out of the darkness like some unspeakable thing of the night and skulks between the shadows waiting to pounce. He is a sadistic predator, toying with his pray. The final moments of this cat and mouse game result in the unveiling of the little boy’s shocking fate and the final image in The Sandman is a haunting one, tinged with sadness and guaranteed to upset.

The Sandman was nominated for an Oscar in 1992. Berry would go on to work on James and the Giant Peach as an animation supervisor and on Monkeybone as supervising animator. He sadly passed away on June 26, 2001 due to a brain tumour. He was 40 years old.

Click here to check it out (the only high quality version I could find has disallowed embedding). Pleasant nightmares...
Folklore Paul Berry Short Film Stop-Motion Animation The Sandman

Jay Watson said…
A wonderful post, with very insightful observations about this little animation gem. I did not know that Paul Berry had passed; very sad indeed.
The Sandman, also has a real vulture like presence, he's a raptor of the id jumping around the bedroom.
best,
r/e
22 December 2009 at 22:14